A reminder on "Three/Multi Tier/Layer Architecture/Design" brought to you by my late night frustrations.

I was going over some C# code that was written for a non-profit earlier this year.  It was fairly typical code and that's what disturbed me so.  It consisted of a single ASP.NET Application with most of the work happening in the Page_Load.  Although there was only one database, the connection string to that database appeared in at least a dozen places throughout the code.  There were a few places where a SELECT * from WHATEVER occurred and they spun through a DataReader in order to set a boolean called "HasRows" to true.

Disclaimer: This post is just general advice.  I know that reams of paper have been written on how to design software, layers, tiers, services, etc.  This post is just to remind a few people that you can't have multiple layers until you start thinking about the responsibility of each layer - the contract and binding.  Life has hierarchies and layers and responsibility - and so should most software.

That being said, here's little reminder about layers of abstraction.  They are typically a good thing.  Remember though, that in "Scott World" (which is hopefully your world also :) ) a "Tier" is a unit of deployment, while a "Layer" is a logical separation of responsibility within code.  You may say you have a "3-tier" system, but be running it on one laptop.  You may say your have a "3-layer" system, but have only ASP.NET pages that talk to a database.  There's power in precision, friends.

This may seem overkill, but believe me, once you've done it a few times, you'll appreciate it when you come back to mess with the code in the future.  Remember also that much of this CRUD stuff can be auto-generated by CodeSmith or by Deklarit.  Please, do resist the urge to open up a SqlConnection from your next ASP.NET page. 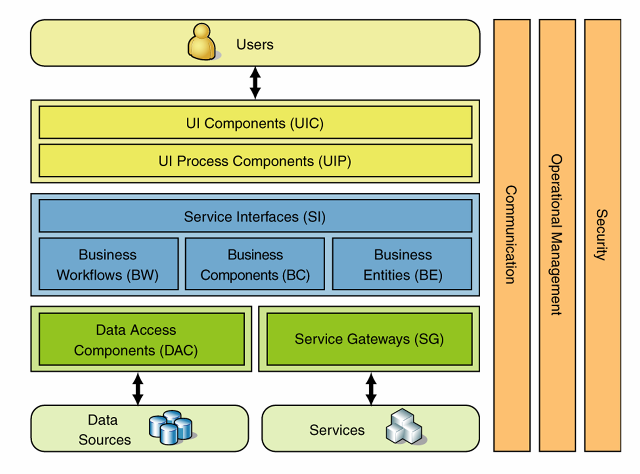 Why should you do this?  Because of the 'ilities and because the simplest even-slightly layered design hides complexity.