Confessions of an Audio Visual Geek 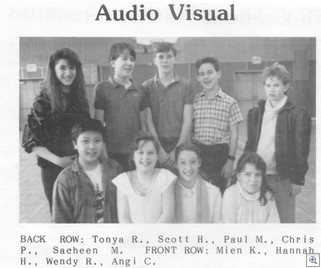 Are we born this way? There's lots of arguments regarding nature versus nurture. There's various controversial characteristics that some groups believe are in-born, while others believe it's choice.

Oh, yes, you know what I'm talking about. It's that which darn not speaks its name, but I'm coming out today, baby.

I'm a recovering AV Club Geek. Some were band camp, others drama. I was a geek. To be clear, there are many kinds of geeks, so don't just lump us all into one bowl. There were geeks, freaks, nerds, dweebs, spazzes, losers, dorks, really I could go on.

I knew early...I think before I could talk.

My wife supports me and realizes that this wasn't a choice. Who would choose to be this way? No, I came out of my sweet mother's womb knowing how to wire a complete home theater with Betamax. Of course, Betamax hadn't been invented at that time, but I still knew, deep in my DNA.

If you might be an AV geek who didn't admit it growing up, come out now. There are groups for this kind of thing. You may already see the signs as an adult that you didn't as a child.

These are only some of the signs. Schedule an intervention today. If you can help just one person...

* I was in A/V club in middle school, high school, and worked for the A/V department in college.

* I wired our new house for A/V, not with Monster Cable, but with Belden 1694A, a video production-quality cable.

* I have all my gear in an A/V "closet", a room my dad and I built when we moved into the house. All gear is controlled via IR blasters run over the Belden all through the house.

I'm sure there's more, but I just wanted to say that I had the same problem, not brag about the problem ;)

Shawn Wheatley
February 03, 2006 18:01
*looks sheepishly at floor while raising hand*
While other kids were thumbing thru the new department store catalogs at Christmas trying to find their "perfect toy" - I was huddled in the corner with the Radio Shack catalog hoping this year I might get the capacitors and radio crystal I need to make my first remote control. I still find myself, now and again, wandering the isles of RS dreaming of what I might be able to fabricate given a few of the choice parts hanging in front of me. :)

David O'Hara
February 03, 2006 18:01
I WANT to know how to stretch the LCD panel to fullscreen when it's also outputting to a projector! Out with it!

Phil Weber
February 03, 2006 18:26
Awesome! I started out taking broken appicances and electronics apart, scavenging parts for pet projects. The 300-in-1 kit from Radio Shack was great, but I needed more pieces to play with. I moved on to working items, which of course, soon became part of the discard pile. My wife has tried several times to convince me to throw away the boxes of cables and spare parts that "I might need one day".

My Dungeons & Dragons group ate you sissies for breakfast! ;)

haacked@gmail.com (Haacked)
February 03, 2006 23:42
"You know that the Xbox 360 doesn't upconvert standard 480p DVD output to 720p because of the Macrovision legal guidelines preventing High-Def non-HDMI output from being upconverted."

Really? I mean, I knew it didn't upconvert from 480p (that's one of the first things I checked when I got mine) but you're saying it's a legal thing? So I guess that means that those upconverting DVD players I've been drooling over only upconvert for their HDMI outputs?

If so, then that sucks. Well, I suppose it's good in that I won't be spending $150-200 on yet ANOTHER DVD player, since my projector doesn't support HDMI. It sucks that I'm doomed to 480p hell... Not that it makes THAT much of a difference, my current projector is only SVGA, but it does a beautiful job of downconverting HD signals.

Cam
February 05, 2006 8:19
OK, Now I don't feel so bad.... My Dad sold and repaired Tv's and Major appliences ( back in the day ) so my job was to sort resistors by color code....
BBROYGBVGW......and also show off new equipment. Like the new Litton Microwave...but my fav was the Magnavox Oddesy...wow pong and duck hunt, this was the first commercial Video Console. And I had one before anybody on my block...needless to say I was cool ( in the day)./..But also Dad would bring me home Broken phones to play with, Old Radios that did not work and many spare parts that became one big monster elcectro thingy-ma-bob in my lair of electro-tech......Life was good.....