2007 Microsoft Office Add-in: Microsoft Save as PDF or XPS 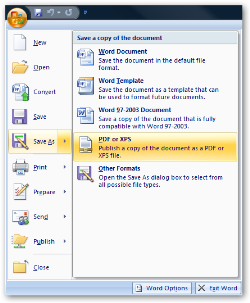 If you've upgraded or are planning to upgrade to Office 2007, don't forget this important (and silly (that it is separate)) additional post-installation step:

Download the "2007 Microsoft Office Add-in: Microsoft Save as PDF or XPS" that lets you, gasp, save as PDF in any of these Office programs:

Sure, there's a million free shareware printer drivers that let you "print to PDF" as well as the glory that is FinePrint that I still continue to use, but sometimes you just want to Save As, you know?