Firefox 2.0 Beta 1: Still ugly as hell by default. For crying out loud, just make up with the Qute guy and set his theme by default. Sheesh.

IE 7: Different, softer, minimalist. I like the tabs. It's odd, but feels familiar.

Recall that IE7 installs the new Windows RSS Platform with it's Common Feed List that 90% of Windows Aggregators will start using for storage. Since Firefox doesn't have a Common Feed Store and doesn't recognize the new Windows Common Feed Store (until someone writes a utility to register feed:// with the Common Feed List) it displays a list of registered feed readers on your system. I really like this approach as it works with my FeedDemon addiction, and will work with not only offline aggregators like RSSBandit and SharpReader, but online ones like Bloglines and MyYahoo.

Both browsers show a very nice, styled page rather than the underlying RSS/XML. IE uses heuristics to figure out if it's a feed and also handles lots of malform-edness, while AFAIK Firefox goes by mime/type. 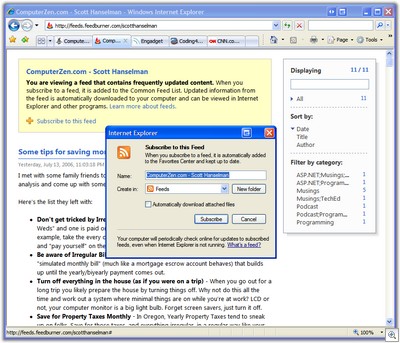 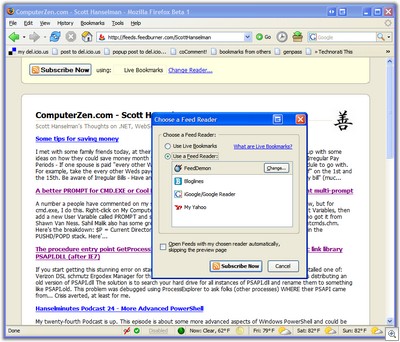 In IE, since it includes a feed retrieval engine, there's a number of very nicely designed dialogs for updating the schedules for each feed, as well as their attached (enclosed) files. 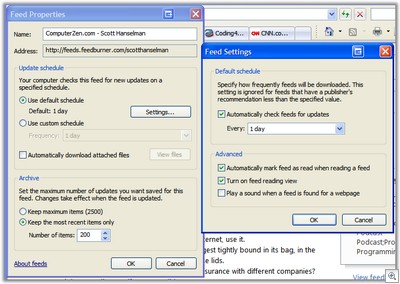 The need for a browser to have Anti-Phishing capabilities is huge in my opinion. Comparing Firefox 2.0 Beta 1 with IE 7.0 Beta 3, I visited six brand new, known, phishing sites. (Remember, Corillian knows Anti-Phishing)

Interestingly, and surprisingly to me, only IE detected every single phishing site. Firefox didn't detect a single one. I would point out also, as an aside, that Outlook 2007 went to great lengths to keep me from visiting these sites.

Perhaps the phishing services that Firefox uses at Google were down during my test? When Firefox does detect a phishing site it's supposed to look like this, below. I was hoping to have two identical phishing sites side by side, but again, Firefox didn't detect anything suspicious on these sites, so I visited the Firefox test phishing site. You can also submit naughty sites to Google. 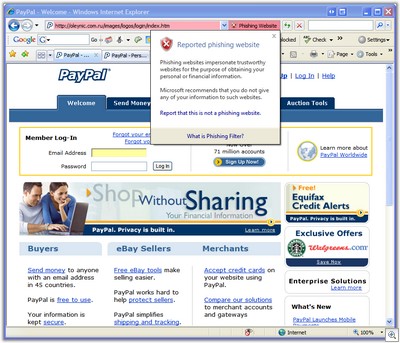 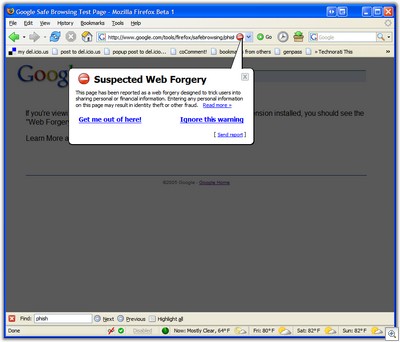 One interesting note, both browsers allowed me to continue working with the known phishing site, even though they knew they were dangerous. I think I'd rather have a dialog that made me type in "I know this is a phishing site."

IE7 has a new "tile" feature available by default; it's the little 4-square button to the far left of the tabs. It's "exposé" for web pages. There's a number of similar Firefox extensions like Foxpose and Tabexpose, but none for Firefox 2.0 today. Give it a few hours. Interesting that IE7 includes it by default, though, with Ctrl-Q (QuickTabs) as the hotkey. 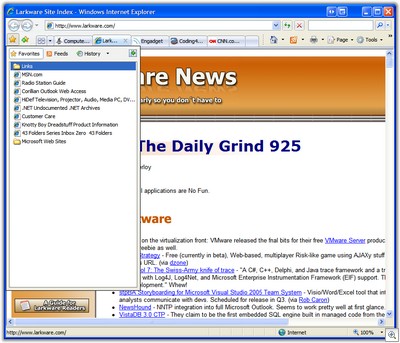 In IE7, I love that CTRL-Scroll is how mapped to the new (and WAY more useful) zoom feature (ala Opera 1997), although I was disappointed to see that the useless Text Size Feature is next to it. Breeds confusion I say. Screw you, Text Size and your lies. 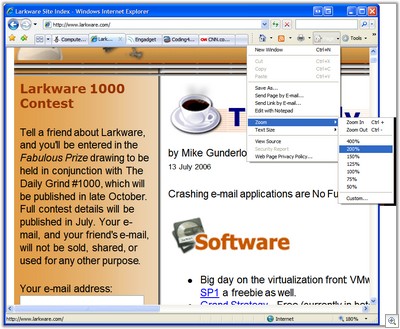 There's dozens of other usability things in IE7 that are obvious, including the revamped Tools|Options for Humans, which I wouldn't be afraid to send my Dad into. Except for Tools|Options|Advanced - that's still scary even to me.

In Firefox 2.0, less has changed, at least, less dramatic stuff. The coolest new feature, IMHO, is the inline spell checker. 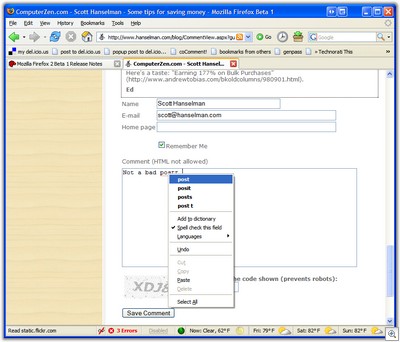 There's another new feature called micro-summaries. Basically it's your page's opportunity to change the title of a bookmark to provide status. For example, Woot provides a micro-summary by specifying this in their HTML:

That HttpHandler might responsd with just this: "$69.99 : Nexxtech 7” 16:9 LCD Portable DVD Player" as text/plain. That text could then be used as the title of a bookmark or toolbar button. It's a little early, and very specilized, but it fills a small gap and adds on to the whole link rel="" vibe nicely. Could really take off ono mobile devices as the equivalent of "tiny RSS."

Firefox also includes the trappings of client-side session support that could take AJAX apps to the next level in the next few years if Microsoft jumps on board also.

The download windows of each browser look pretty much the same. 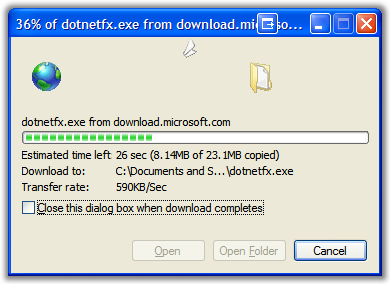 There's a new animation in IE's, but otherwise, not much here. I still prefer Firefox's consolidated view. 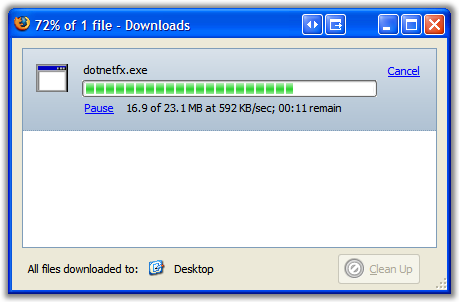 Before I was pretty much a one browser guy, Firefox. Now I think I'll try IE more, and even more likely I'll notice which browser I'm in less as they are converging. The RSS features of IE7 are compelling and as soon as there's a NewsGator Online/RSS Common Feed Store synchronization story along with FeedDemon support, I might spend more time in IE7.

Most importantly I won't feel back recommending either of these browsers to family. Both are WAY safer than their predecessors. (Assuming the future parity of their phishing feature)

I am a recent firefox user and have seen firefox taking up a lot of memory in taskmanager when compared to IE.I like the tab feature and the download view in firefox but am disappointed by the amount of memory it takes up with a few tabs on.How is memory management in the new beta...

Turns out, though, IE with a lot of tabs uses a lot of ram also. I'll look into it deeper and get back to you.

Scott Hanselman
July 14, 2006 13:19
One can add more online feed readers to Firefox 2.0's list. Here is a how to on adding NewsAlloy my favorite reader: http://www.vasanth.in/2006/07/13/ConfigureNewsAlloyAsDefaultFeedreaderInFirefox20.aspx

The Firefox 2.0 feature I like a lot is the in line spell check. Very useful for bloggers. :-)

Scott, may I recommend to you VMWare or Virtual PC? (;P)

Seriously though, one of the things I love about virtualisation is being able to have on hand a dedicated, resettable 'out-of-box' Windows XP installation available for this very purpose (and, perhaps just as dangerous, testing my own stuff).

Paul Coddington
July 14, 2006 20:55
Did FF 2.0 breaks your extensions? FF is notorious for breaking my Onfolio extension in every upgrade even in minor ones.

I like IE 7's feature where you can close and open new tabs by single clicks.

I am a FF fan but once IE 7 is officially out I will most likely go back to IE.

Cam
July 15, 2006 1:31
IE7 still doesn't do Firefox's excellent Find that doesn't obscure the page you are looking at. The popup find dialog on IE7 looks very dated to me after Firefox

So it's been years since Microsoft decided to release a browser (as we're all painfully aware). You'd think in that time period, they would have learned a lot about web browsing. If you thought that (as I did before downloading), you would be sadly mistaken my friend.

Here's a quick list of things that drove me up a wall within five minutes of using IE7 Beta 3:

Typing a partial address into the address bar doesn't even attempt to find a site. In FireFox if I type ComputerZen, the application is "smart" enough to find the top match and just automatically navigate to the site instead of just prepending the address with http://. Joke.

It seems really slow. Even opening a tab takes a second. Hit Ctrl+T and just wait.

That annoying clicking sound is still present when you navigate (it can probably be turned off but I think it's about as useless as a butt crack on one's elbow).

Alt + A doesn't put the focus in the address bar any longer. Ctrl+L or Ctrl+O pops the dialog, but the current address isn't in there. That's annoying. What if I just want to remove part of the current URI? So sorry.

The menu is is invisible until you hit the alt key. Is this supposed to be a better design or something?

Those are just the things I found while briefly playing around with it. Sorry for the rant on your blog Scott, but, I was hoping for more than just an updated UI with tabs. Grr.

Just thought I'd share the link. Not sure, if as you say, it's tat Google's support for anti-phising was down at the time.

* it does do partial address matching on my machine...had you recently cleared your history?
* I don't see the pause on CTRL-T, but I do agree that Firefox's Ctrl-T (at least for blank tabs) is faster
* Seriously, when did Alt-A *ever* put focus in the address bar? Alt-A has been "Favorites Menu" since at least version 4. It is on my IE6 installs. Now, F6 *does* put focus in the address bar on both versions.
* Invisible menu...same thing with Office 2007 and some Vista stuff...ya, it's a new UI thing.
* Clicking of URLs, I'd turned that off a long time ago in IE6 and my settings came foward when I upgraded. Not sure why you see that. It's in Tools|Options|Advanced.

> "* it does do partial address matching on my machine...had you recently cleared your history? "

Possibly. Hmm. Not sure about that one.

I'm sorry, I meant Alt+D. You'll notice the D is underscored as a hot key accelerator in IE6 but, not 7.

Michael Leung
July 17, 2006 0:13
> Typing a partial address into the address bar doesn't even attempt to find a site. In FireFox if I type > ComputerZen, the application is "smart" enough to find the top match and just automatically navigate to > the site instead of just prepending the address with http://. Joke.

kriz
July 17, 2006 3:15
Scott, what about speed comparisson? i switched to FF for sole reason of incredible 10x speed up on ajax-heavy sites. evrytime i got back to IE it felt like lumbering horse driven ore cart... Any improvements on that in ie7?

secretGeek
July 17, 2006 21:37
After being spoiled or having my brain be re-written because of Newsgator Inbox integration into Outlook, I can't get very comfortable with reading RSS in the browser ... I have IE7 and tried in Firefox and even Apple's Safari. Not sure I can put a finger on it yet, but I think it has to do with control of the post in my space. In Inbox/Outlook ... I delete a message as read, I don't mark it read and then still see it. Also Inbox/Outlook make offline RSS reading (like on an airplane) very easy.

Ctrl+Enther puts http://www. and .com on either side of the URI, but it's not exactly what I was getting at. Type Scott Hanselman into FireFox and watch this blog come up.

Michael Leung
July 20, 2006 13:07
Personally a feature I really like in Firefox is the ability to restore a session after a crash - especially useful if your installing beta software!

domoore@gmail.com (Damien)
August 14, 2006 6:08
I've been using IE7 Beta 3 for several weeks. Oddly, it just doesn't work when going to some Websites, including Microsoft's. I've had to turn in a bug because multi-select on lists doesn't work for me (imagine that, a bug that is not consistent on each machine...). Depending on the Website, popups may or may not work. And of course many ECommerce sites check browser versions and won't work with the beta (Wells Fargo).

At this point I'm not seeing much point in an "open" IE beta. I'm usually switching to (non beta) Firefox just to get stuff done. It does look better than IE6, though...