I just got back from the Microsoft BUILD Conference where Scott Hunter and I announced both .NET Core 2.1 RC1 AND talked about .NET Core 3.0 in the future.

First, .NET Core 2.1's Release Candidate is out. This one has a Go Live license and it's very close to release.

You can download and get started with .NET Core 2.1 RC 1, on Windows, macOS, and Linux:

Here's a deep dive on the performance benefits which are SIGNIFICANT. It's also worth noting that you can get 2x+ speed improvements for your builds/compiles, by using the .NET Core 2.1 RC SDK for building while continuing to target earlier .NET Core releases, like 2.0 for the Runtime.

In fact, if you have Docker installed go try an ASP.NET Sample:

This is huge. You'll soon be able to take your existing WinForms and WPF app (I did this with a 12 year old WPF app!) and swap out the underlying runtime. That means you can run WinForms and WPF on .NET Core 3 on Windows.

"Bringing desktop workloads to run on the top of .NET Core is great. We would love to close the loop and open source them as well. We are investigating how to do that." - Scott Hunter, Director PM, .NET, Microsoft

Why is this cool?

No need to install anything, just xcopy deploy. WinFormsApp1 can't affect WPFApp2 because they can each target their own .NET Core 3 version. Updates to the .NET Framework on Windows are system-wide and can sometimes cause problems with legacy apps. You'll now have total control and update apps one at at time and they can't affect each other. C#, F# and VB already work with .NET Core 2.0. You will be able to build desktop applications with any of those three languages with .NET Core 3.

Secondly, you'll get to use all the new C# 7.x+ (and beyond) features sooner than ever. .NET Core moves fast but you can pick and choose the language features and libraries you want. For example, I can update BabySmash (my .NET 3.5 WPF app) to .NET Core 3.0 and use new C# features AND bring in UWP Controls that didn't exist when BabySmash was first written! WinForms and WPF apps will also get the new lightweight csproj format. More details here and a full video below.

Even more, why not compile the whole app into a single EXE. I can make BabySmash.exe and it'll just work. No install, everything self-contained.

.NET Core 3 will still be cross platform, but WinForms and WPF remain "W is for Windows" - the runtime is swappable, but they still P/Invoke into the Windows APIs. You can look elsewhere for .NET Core cross-platform UI apps with frameworks like Avalonia, Ooui, and Blazor. 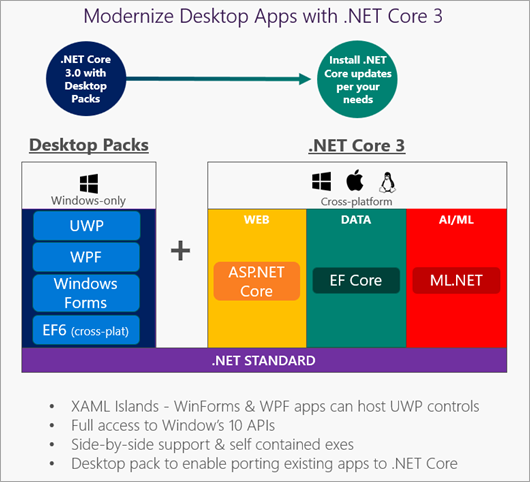 You can check out the video from BUILD here. We show 2.1, 3.0, and some amazing demos like compiling a .NET app into a single exe and running it on a computer from the audience, as well as taking the 12 year old BabySmash WPF app and running it on .NET Core 3.0 PLUS adding a UWP Touch Ink Control!

Also, I am not sure if you have read the HUNDREDS of comments that have been left on that blog post, but there are a lot of questions and good discussion around the approach being taken here.

Mike-EEE
May 10, 2018 13:45
SourceLink looks really interesting, debugging our suite of NuGet packages has traditionally been quite tricky. We've created a framework that makes it easy to swap in code in apps that consume the packages, but SourceLink will make it much quicker to troubleshoot issues.

It's also worth noting that you can get 2x+ speed improvements for your builds/compiles, but and to adopt the .NET Core 2.1 RC SDK while continuing to target earlier .NET Core releases, like 2.0 for the Runtime

Could you elaborate on how precisely to do this please?

It's also worth noting that you can get 2x+ speed improvements for your builds/compiles, but and to adopt the .NET Core 2.1

Scott, the above sentence got a little garbled; what was supposed to go where "but and to"?