There's lots of interesting stuff going on in the ASP.NET team, and you can usually learn/glean/figure out most of it (if you're interested) by poking around the Codeplex ASP.NET site. They update it all the time, and you can watch their thinking. They put all sorts of stuff up there, ideas they are floating, directions they are considering and (really early) previews of those ideas and directions in the form of code. It's not production ready, more brainstorming - that's why it's on CodePlex, and why they don't exactly advertise the heck out of it.

There's a release of ASP.NET Dynamic Data 4.0 Preview 2 that was quietly put up just a month ago with this scary disclaimer:

NOTE: These previews contains features that may not be in the next version of the framework. These previews are not production quality and should be used at your own risk.

Let's poke around the SampleProject Solution that's included with this preview download. There's five projects showing off a number of new feature possibilities.

The two I'm interested in are the DataServicesServer and Client.

Before I talk about them, let's review some of the things we can, as developers, choose from in .NET 3.5 on the Data side. You've got lots of choices:

On the Web side, you can make your "angle-brackets" and HTML UIs ;) a number of ways: 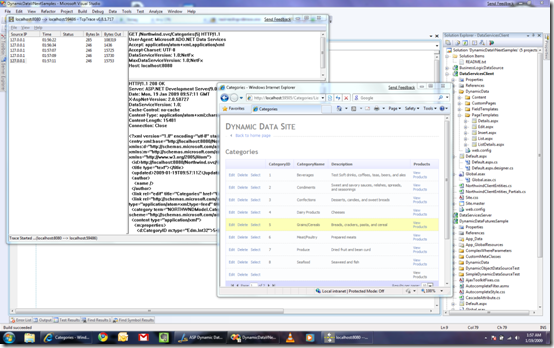 For the most part, you can happily mix and match these different technologies as much as you like. That means you can use ASP.NET MVC with NHibernate, or Web Forms with Subsonic.

However, ASP.NET Dynamic Data does a LOT of stuff for you. It needs a complete "meta-model" populated that describes the data and needs to understand how to update that data. It's pretty specific to the underlying database (or ORM, or whatever) technology, so you need a provider that is specific. That DataModelProvider (and a few others) get the metadata from your source and pass it to ASP.NET Dynamic Data. ASP.NET 3.5 SP1 ships with providers for Entity Framework and Linq to SQL.

You could implement your own, if you have an existing database/access technology. Someone could write some NHibernate or Subsonic providers, then get all the Dynamic Data stuff to sit on top.

I really like keeping my websites from having direct access to the database, at least when I'm doing big Enterprise work. One of the rules the security guys always drilled into us was to assume that the web server has already been compromised. Basically, assume they (the baddies) OWN (or PWN) it, and code appropriately. There's a number of ways to do this, but one way to limit access to your database is to create a very limited Web Services/REST interface to be called from the Web Server.

If you check out the web.config of the DataServicesClient project, you can see he's added client-side assembly redirects to force the loading of his private builds of two assemblies:

There's two changed files with the goofy build number of 99.0.0.0. Those are preview DLLs. After this, it  looks pretty much like a standard Dynamic Data ASP.NET site.  There's a client-side DataContext generated from a standard, unchanged, ADO.NET Data Service and it gets registered in the Global.asax:

The Dynamic Data system gets all its meta-model information from the DataServiceDataModelProvider pass in there. It's currently in Microsoft.Web.Misc.dll along with some other very telling (at least at the time, but surprising no one noticed) stuff like "RedDogDataServiceContext" and "SDSDataServiceContext." (The last one is a silly name, expanding to SQL Data Service Data Service Context. ;) )

But not just Dynamic Data, WebForms, too

In the DynamicData Templates, there's a reference to a new DataSource control called DataServiceLinqDataSource. That's included in this preview. This is cool because it not only hooks up nicely to the templates, but it can be used outside Dynamic Data. You can use it in Web Forms just like this using a ListView or GridView or whatever.

This way you can use ADO.NET Data Services wherever. In markup, in code-behind, in Dynamic Data sites, or some combination of them all - staying off the database directly and talking REST (AtomPub) Web Services instead from you Web Services, so you go from this:

Again, bask in the wonderful Paint-y ness of my lovingly created high-quality diagrams.

I personally think that this is an important addition and fills a hole. If you agree and think it should be a part of something in the future, tell Scott Hunter (crush him with email!) the Program Manager for ASP.NET Dynamic Data. He put this release up for feedback, so contact him if you've got ideas, comments or feel strongly about something. Or leave a comment here and I'll tell him.

Not surprising considering how the news regarding the two technologies at hand were communicated by MSFT.

I recently came across this blog post that breaks it all down in a funny way:
http://dotnet.org.za/codingsanity/archive/2008/11/12/teaching-tim-english.aspx

Kristofer
January 19, 2009 18:45
This is nice detail by you , your are writing from heart.
Thanks
Indu
http://shaktibanna.blogspot.com/

NH2Linq is covered by a large number of unit tests. They represent the typical scenarios one encounters when querying. Most of the tests pass. But some (rather specific) features are not yet supported and thus the respective tests fail.
And yes, you can definitely use it for production code! A lot of people do.

In the meantime, HQL is not that far from Linq, at least in terms of expressiveness.

So does this means you could use NHibernate with Astoria? That sounds interesting.

To quote Shawn:
"To accomplish this I've added three features:

I assume, if they follow down this same path, that scaffolding could be generated assuming it has a IQueryable implementation. And since it's MS, I figure we'll see a Linq to Sql or EF option for MVC scaffolding ?

Steve
January 20, 2009 3:39
By the way, I thought we were going to see the RC for asp.net mvc soon with some scaffolding support Scott ?

Steve
January 20, 2009 19:00
Scott- the notion of LINQ to SQL being dead ended is scary to a lot of folks I know and respect. We need some clear guidance on what is happening there and if it is going the way of the Dodo - let's hope it is placed up in Codeplex so folks can have at it.

http://nick.katsivelos.myopenid.com/
January 22, 2009 16:17
Scaffolding for MVC on top of my NHibernate model? Will certainly be interesting.

I wonder if I can change the scaffolding templates? Are they T4? Or is that perhaps more of a Sub Sonic angle?

Ed
January 26, 2009 21:33
I am honestly amazed by how the ASP.net team manages to mix all these different frameworks (for both data and UI) together, developing them in so many different steps over 8 years. The ability to mix different ASP.net technologies will have a big positive impact, in migrating old WebForms applications, or to develop complex new ones.
This means that someone, along the road, picked REALLY GOOD architectural decisions - or that developers had a HELL of a refactoring session :)

NOTE: your diagrams are clearly NOT high-quality or professional. They're missing dark red backgrounds mixed with blue/green gradients. Also, they don't have any text in Comics Sans :P