I was getting frustrated with the speed (or lack of) of Windows Search within Windows 10 lately. I went over to my Indexing Options - just hit Start and type Indexing Options - and was surprised to see that there was over 1.5 MILLLION items indexed! That seems like a big number. Why so large?

I checked my "index these locations" list and didn't see anything weird, but I did note that Indexing does include c:\users\YOURNAME by default. That seems reasonable, because it is reasonable.

However, I also noted that I had a LOT of ".folders" (dot folders) under my C:\users\YOURNAME folder adding up to a few gigs of config text files, caches and general crap.

I was able to significantly lower the number of items indexed from over a million to a reasonable 215k items just by excluding (un-checking) folders that I knew didn't matter to me as much. 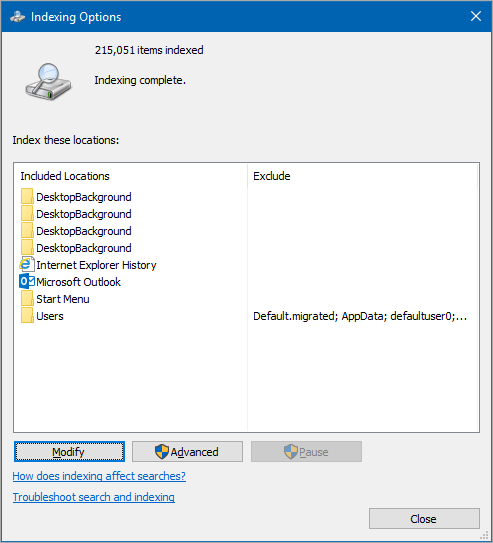 Go to your C drive (or wherever ~\YOURNAME is) and go to your top level User folder. I unchecked a bunch of the stuff that didn't matter to me. 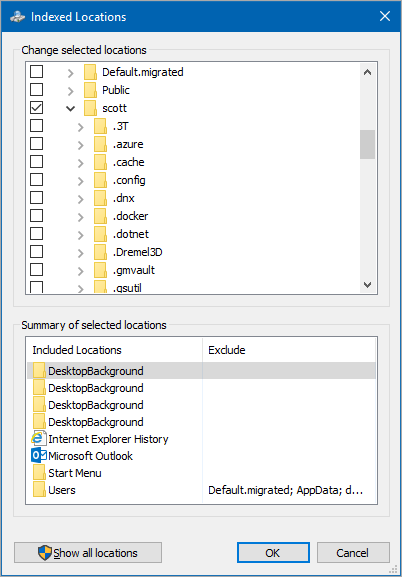 For average users this won't matter, but for developers who install a bunch of utilities, have their Dropbox or OneDrive in the c:\users folder, a 5 min audit of your indexed files can give your Indexed Files a nice refresh.

Daz
May 03, 2017 1:48
Someone didn’t study the application guidelines for storing user specific application data. This has been a problem on Windows forever where on one hand Windows developers would try to create guidelines that would allow applications to work across devices, languages, and configurations and on the other hand lazy application developers that would walk all over the operating system without any interest in being a good citizen. Next version of Windows would try to herd these developers in the right direction with app compat layers that would confuse those that didn’t get the memo about how folders are redirected to other places etc.

When developers apply the Linux guidelines to storing user specific application data to Windows you are not only littering personal folder space with strange folder names (that by the way are nicely hidden on Linux); you also get a bad search experience as you have explained. The proper place to store this data is in ~\AppData which by the way is not included in the search index (as can be seen in the screenshot).

And looking at all the “dot-folders” on my machine it seems that DevDiv is the biggest offender when it comes to not being a good Windows citizen...

Martin Liversage
May 03, 2017 8:06
Dot-folders, huh? Another evidence that Windows API must have never allowed apps free access to file system, because app developers are irresponsible creatures who would not store their app data into AppData folder.

Fleet Command
May 03, 2017 10:05
I have only included "Start Menu" to experience the fastest start menu search possible :)

Interesting that you bring this up, looking at my own user folder the biggest offenders are .nuget, .vs and .vscode (and a leftover from .dnx).

Are you suggesting that Microsoft's own developer tools developers aren't following developer guidelines?

Stephen Donaghy
May 03, 2017 17:39
Where do you use it for? If you just want to search files by filename, then I would recommend Everything (Freeware, voidtools). Matches filenames near instant.

KoalaBear
May 03, 2017 19:11
I've found Agent Ransack to be great for searching for files and file contents. Simple, fast and tons of features. It has Windows Explorer shell integration on the search results which I find particularly handy because you get same right-click menu you get from Windows Explorer.

Are you suggesting that Microsoft's own developer tools developers aren't following developer guidelines?

Yes, when I wrote DevDiv I meant Microsoft's Developer Division. As I'm not an insider I don't really know if that is the correct term. And sorry for the rant because I love their products but I'm disappointed when Microsoft products doesn't play well with Windows (and this is not the only example).

Martin Liversage
May 04, 2017 1:15
Or, as someone has already said, turn off windows indexing completely and fall back on something like agent ransack. The main problem is that I don't trust windows search to find files I know exist, whereas agent ransack works 100%

Hear, hear. It was bad enough when ports of popular open source software did it, but these days the biggest culprits are the Developer Division. Come to think of it, the *only* Microsoft software that plays reasonably well with the Windows guidelines is Microsoft Office, and that too not always. Heck, even *Windows* (10) sometimes doesn't.

Makes me think that there are very few people left who care about Windows any more - even within Microsoft.

Raj Chaudhuri
May 04, 2017 13:25
That's cool, now that I checked of all those folders, I'm wondering, is there any way to exclude all the node_modules and .git folders (current and future ones) - without going through all the folders every few weeks and unchecking them?

Peter Grman
May 04, 2017 15:00
I just disable indexing completely. Total Commander has excellent search function and SSD is fast enough that I don't care about indexing.

Vladimir
May 05, 2017 19:55
Rather than hacking around with Window's horrible search indexing, maybe you guys should:

It's also sort of mind-boggling how bad Windows search remains in 2017. Google can search a trillion documents in a few milliseconds but Windows takes minutes to search my hard drive, and the start menu constantly hangs while typing into it. Windows has just about the worst search capability of any product I use.

Jake
May 06, 2017 22:39
I use Search Everything by VoidTools and turn Windows horrible indexing off. It indexes your entire drive in 10 seconds and then finds everything instantly as you type. Also, you can install it from Ninite.com on all your new PCs. Since Windows has proven to be completely incapable of writing an indexer for over 20 years now, maybe you guys should just buy Search Everything and integrate it.

I also use Agent Ransack when I want to search the contents of the file.

HSC Result 2017
May 08, 2017 2:05
Is there any way to exclude all the node_modules and .git folders without going through all the folders regularly?

Dustin DeTorres
May 08, 2017 17:42
Or just disable the useless Windows search (indexer) and use Everything to search instead. Finding a file by name is so fast that worrying about where stuff went is a thing of the past. Works like the native search always should have...

Niclas Eriksson
May 08, 2017 21:12
To the people saying 'turn it off and use X': Don't you get a bunch of warnings about how lots of bits of Windows will stop working if you turn off indexing in Win10? Can those warnings just be ignored?

I agree that it's astonishing that it's a feature which has been continuously broken in every single version of Windows since 95. The only comparable feature for longevity-of-fail is F1 help in Visual Studio, and that did actually sort of work up to the late 1990s.

Will
May 11, 2017 0:03
Thanks and the whole time I'm thinking I need a faster PC with faster SSD ;)) You are a star. MS should really get users to select these folders from basic (speedy - only exe's and basic stuff) to comprehensive. Will make Windows 10 so much lighter on lower spec pc and will improve the Win10 experience drastically.

Johan
May 11, 2017 18:10
I just came late to say that i absolutely loved the previous article about cloud service vs cloud vm hosting.
As of 2017 i'm still scared to make serious jumps in the cloud for the moltitude of services and terms that overlaps, mixed with a floating cost.
Articles like that are not enough to cancel my fears but are a great push in the right direction, and with concrete example, few words and some screenshot you were, as usual, very very clear.
Thanks!

Fabrizio Cioni
May 12, 2017 12:20
I use Windows Indexing (on Windows 7). It doesn't find what I want (as a developer) unless I customise it to index the contents of source files rather than just the properties. E.g. .sln, .csproj, *.sqlfiles.

Also, some file types are configured by default to use the XML filter, but that only indexes the tag contents. For file types like .aspx, .xml, .xsl, etc. I change the filter to be the Plain Text Filter, so that tag names are also indexed.

What might be a nice feature... have a facility in Visual Studio to have it configure Windows Indexing for all of the file types that are registered for Visual Studio. (I should probably submit a Feedback post.)

Paul
May 16, 2017 8:44
Hello. I just installed this operating system, it's really strange and new, thanks for sharing this tutorial
friv
run 3
pbs kids