I just discovered that you can see a preview (almost like a daily build) of the Azure Portal if you go to https://preview.portal.azure.com instead of https://portal.azure.com. Sometimes the changes are big, sometimes they are subtle. It feels faster to me. 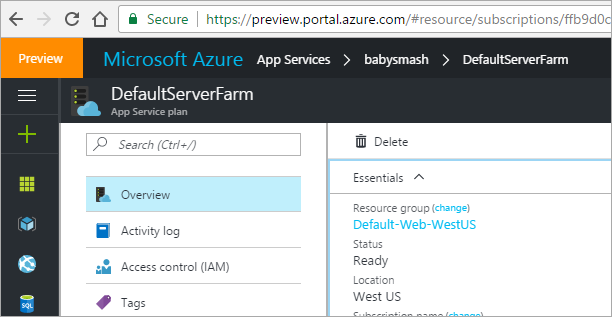 A few days ago I blogged that I had found a number of things in Azure that I wasn't previously aware of like "Metrics per instance (App Service)" which is DEEPLY useful if you run more than one Web App inside an App Service Plan. Remember, an App Service Plan is basically a VM and you can run as many Websites, docker containers, Azure Functions, Mobile Apps, Api Apps, Logic apps, and whatever you can fit in there. Density is the word of the day.

A bunch of folks agreed that there were some real hidden gems worth exploring so I thought I'd take a moment and do just that. Here's a few of the things that I'm continuously amazed are included for free with App Service.

There's a web-based console that you can access from the Azure Portal to explore your apps! 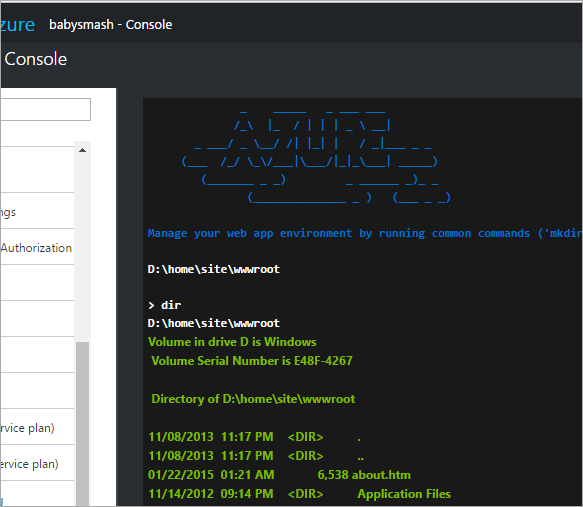 This is basically an HTML 5 bash prompt. I find it useful to double check the contents of certain files in Production, and confirm environment variables are set. I also, for some reason, find it comforting to see that my "cloud web site" actually lives on Drive D:. It calms me to know the Cloud has a D Drive.

App Service Editor is the editor that's codenamed "Monaco" that powers Visual Studio Code. It's amazing and few people know about it. I use it to make quick updates to production, although you do need to be aware if you have Continuous Deployment enabled that your changes will get eventually overwritten.

This is an amazing feature that not enough people know about. So, I'm assuming you are aware of Staging Slots? These are things like dev-, test-, or staging- that you can pull from a different branch during CI/CD, or just a separate but near-identical website that runs on the same hardware. The REAL magic is the Testing in Production feature.

Once you have a slot - I have one here for the Staging Site for BabySmash - you have the option to just "swap" between staging and production...OR...you can set a percentage of traffic you want to go to each slot!

Note that traffic is pinned to a slot for the life of a client session, so you don't have to worry about folks bouncing around if you change the UI or something.

Why is this insanely powerful? You can even make - for example - a "beta" slot and have your customers opt-in to a beta! And you don't have to write any code to enable this! MyApp.com/?x-ms-routing-name=beta would get them there and MyApp.com?x-ms-routing-name=self always points to Production. 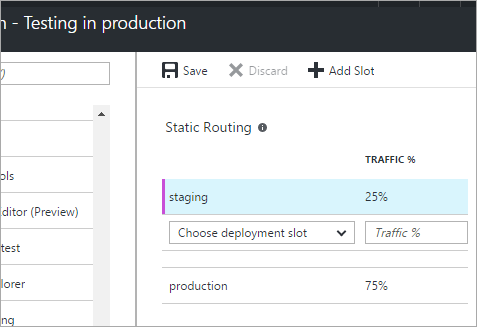 You could also write a PowerShell script that would slowly move traffic in increments. That way you could ramp up traffic to staging from 5% to 100% - assuming you see no errors or issues.

All this stuff is built-in to the Standard Azure AppServicePlan.

A number of folks in the comments of my last post asked about the 20 websites I have running on my single App Service Plan. Some felt I may have been disingenuous about the pricing and assumed I have a bunch of SQL Server databases behind my sites, or that a site can't be useful without a SQL Server.

There's a few things there to answer. My sites are many different techs, Node.js, Ruby, C# and ASP.NET MVC, and static sites. For example:

There's a number of options, including Easy Tables for your Mobile Apps. Check out http://mobile.azure.com to learn more about how you can get a VERY quick and easy backend for mobile (or web) apps.

If you have used Git deploy to an Azure App Service, you likely noticed a "Sidecar" website that your app has. I have babysmash.com which is actually babysmash.azurewebsites.net, right? There's also babysmash.scm.azurewebsites.net that you can't access. That sidecar site (when I'm authenticated) has a ton of easy REST GET APIs I can call to get my process list, files, deployments, and lots more. This is all powered by Kudu, which is open source by the way. 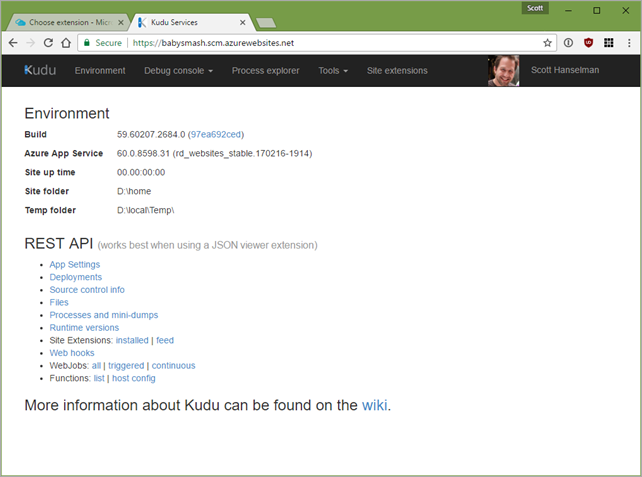 Kudu's sidecar site is a "site extension." You can not only write your own Azure Site Extension (they are just NuGet packages!) but it turns out there are a TON of useful already vetted and published extensions you can add to your site today. Those extensions live at http://www.siteextensions.net but you add them directly from the Azure Portal. There's 84 at the time of this blog post.

I just discovered this "uptime" blade within my Web Apps in the Azure Portal. It tells me my app's uptime and if it's not 100%, it tells my why not and when!

Again, none of this stuff costs extra. You can add Site Extensions or explore your apps to the limit of the underlying App Service Plan. I'm doing all this on a single Standard 1 (S1) App Service Plan.

Sponsor: Excited about the future in ASP.NET? The folks at Progress held an awesome webinar which gives a 360⁰ view of the new ASP.NET Core and how it compares to WebForms and MVC. Watch it now on demand!

Comment on this post [22]
Share on Twitter or Facebook or use the Permalink
February 22, 2017 10:05
Scott, the link in "I blogged that I had found a number of things in Azure that I wasn't previously aware of" is null. Or is it not working only for me?

Ron
February 22, 2017 13:28
Thanks for the explanation about the database. I will try to experiment with LocalDb... lets see whether that will work.

remi bourgarel
February 22, 2017 15:03
Hey Scott,
Link to the test in production seems broken (missing full colon) for me.
Thanks,
Richard

Bear in mind that if you are doing CI/CD with dev, test, staging environments, this break even is hit with 1-2 projects

Paul Hatcher
February 22, 2017 17:18
Hi Scott, +1 for wanting more detailed instructions on finding the Uptime blade. Can you update your post with instructions on where to find it? Thanks!

Rob Reagan
February 22, 2017 17:20
I found the Uptime blade. In the Azure Portal, first select your Web App. Next, choose the "Diagnose and Solve Problems" menu option.

remi bourgarel
February 22, 2017 19:02
Scott, you could also include the App Service Local Cache feature (https://docs.microsoft.com/en-us/azure/app-service/app-service-local-cache). This might speed up some sites, especially ones with many local files and I/O.

Oliver Albrecht
February 24, 2017 18:14
Just curious, but what charting library does azure use for monitoring/metrics/app health?

Frank
February 24, 2017 18:24
I've been working with DocumentDB in the last week - I've decided that Collections are the perfect container for my multi-account collections of documents/records - I would like to be able to determine the monetary cost for each collection, so I can bill per collection to my clients too - whilst I can see the whole cost for the DocumentDB instance, I can't see the cost broken down anywhere by Collection, which as I understood it was where the costs come from... do you know if it's possible to see how much particular Collections are contributing to your monthly bill?

Jon
February 25, 2017 11:16
Is anyone aware of a good tutorial for using deployment slots for a zero (or close to zero) downtime deployment?

I've read the docs here, but the "auto-swap slot" seems to be an extremely clunky way to approach this and ends up wasting a lot of resources.

I'm particularly interested in how to deploy to an web app that is configured for always on without having to also have the deployment slot be always on. The deployment slot should only turn on long enough to get hot for the swap. Afterwards, it should go to sleep as quickly as possible.

From what I've read and a few experiments it seems that what I am trying to do is extremely difficult to accomplish in Azure. It seems like something that would be a very common use case, so I am sure that I have missed something.

Dmitry
March 06, 2017 7:03
I would also recommend checking out this blog post which is pretty in-depth on various App Service logs: Where to Find Azure App Service Logs for your App, IIS, FRT, etc