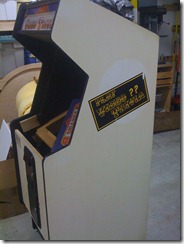 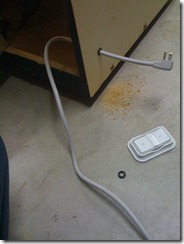 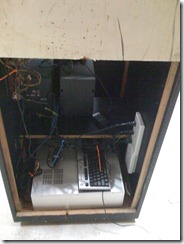 One question though, how did you dealt with the issue of heating? Won't having a lot of computer in there (and specially that heat producing beast also known as xbox) generate enough heat to bend or damage the box?

Congrats, and keep the updates coming!

Ramiro
June 05, 2009 20:46
It's looking great. This is a project I've considered starting myself on a few occasions. Thanks for providing so much detail Scott. I've been following along on Twitter and it's great to see the finished product coming together.

Can't agree more that the 1985 Tax permit adds an unspeakably authentic quality to it. This is going to rock!

Stu Thompson
June 05, 2009 20:50
@Ramiro - There's plenty of room inside, to warp or bend the case, you'd need so much heat that, there'd be a fire or something else completely obvious going wrong. Keep in mind that when you open a cabinet up and take the guts out, it's a transformer, and a circuit board, and a few really crappy speakers.

The actual cabinet is like 7/8" LDF (Low Density Fiberboard) it's HEAVY. And strong. And there's TONS of room inside the thing.

Thad
June 06, 2009 0:12
Hi scott. I've built an arcade from scratch. I have plenty of anecdotes and battle scars if you're interested in hearing them.

Cabinet:
A coworker used to write software for the ATARI Jaguar (lulz). He had an old Ateroids Deluxe Cabinet he was willing to part with. I gutted it during a lunch break at work. Another coworker (and frequent reader) helped me lug the cabinet it into my mom's minivan.

Control Panel:
Easily the most important part of the arcade. Never mind the monitor, or the speed of the computer. the control panel makes / breaks the whole system. I think I went through 12 revisions on cardboard cutouts before I could comfortably fit two players side by side. I printed my blue prints from PDF and took them to work so I could get input from different people with different hand sizes.

Software:
I run Maximus Arcade software. It works pretty well, and I like paying people for software so they can take my money and buy more hair gel.

Additions:
I also turned it into a ghetto NAS - 4 TBs!

Stu
June 06, 2009 8:18
Ramiro - It's just not that hot, as John says. There's lots of air and room. There's two vents in the back with screendoor material. I could add a fan. I'll probably put a thermometer in there and see how hot it's getting.