Building your own Arcade Cabinet for Geeks - Part 2 - The Monitor

This is the second part of a multi-part series I'm going to do about assembling an Arcade Cabinet for my house. This series has two disclaimers: 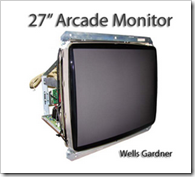 If you ask a purist, the ONLY monitor on to get for your home arcade is the Wells Gardener 27" Flat Screen Arcade CRT Monitor. There are others, and there are special video cards that run at the appropriate 15kHz that these monitors like. This particular monitor I've linked to has VGA support, however and will do 70Hz and 800x600. However, it's also about 80-95lbs.

Not only are these heavy, but they are a hassle to mount, they are heavy (did I mention that?) and depending on which one you get, they can be a little dangerous if you touch the wrong stuff.

True, you will get the "genuine" arcade look. Also, you can't argue with 27", size matters. 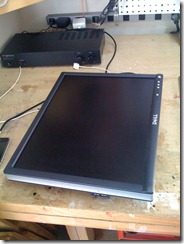 For me, however, I used a Dell 2003FP LCD Monitor. You may laugh, but it's clear, high-res, it's fantastically light, and I'm sure at some point, there will be some software to make my LCD as crappy and blurry and ghosty as a real arcade monitor.

Remember, I don't just want to play Donkey Kong, I also want to play Far Cry and Doom, so I am totally happy with a high-res LCD. The only trouble is finding a 4:3 LCD. I happened to have an extra, but you may need to look in the classifieds or on Craigslist.

Another option is to use a 24" 16:9 LCD and cover it with a bezel, or frame. You'll likely already need a bezel around your screen, so cropping the sides isn't a big deal for me. If my 4:3 LCD dies one day, I'll replace it with a 16:9 and crop it and I suspect no one will notice.

While my arcade cabinet came with a large broken (well, I broke it) monitor with burn-in, I needed to change the layout to make my LCD work. You can see there's a hole for dropping a CRT in and having the end of the CRT hang down into the middle of the box.

One of the benefits of using an LCD is the standard VESA mount on the back of the monitor. John and I pulled this old wood frame out, and took a piece of plywood and mounted the VESA bracket from the monitor's original pedestal (that we took apart), then put the whole thing back in. Now I can mount any VESA LCD in the system on this centered mount. 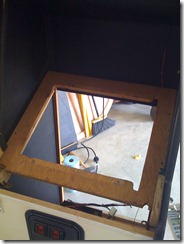 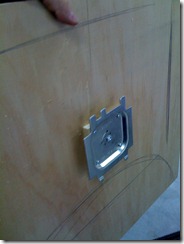 We then cut a semi-circle at the bottom to make room for both the video cables and the future control panel wires.

Notice also the angle of the monitor. Most older arcade cabinets didn't mount the monitor at a vertical angle or even close to vertical. Instead, since your head will be down while playing, they put the monitor nearer the horizontal.

We'll put a black framed bezel around the monitor in the "art" portion of the project. 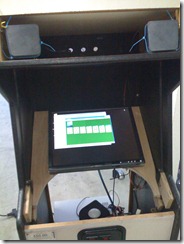 Then as seen in the third picture, we added a piece of frosted glass. At this point I'm playing solitaire as a test. I purchased an X-Arcade Dual Tankstick a while back (a year or more) and again, just for a test, I set it in the void. 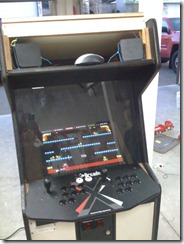 To be clear, to finish here would be the height of cheesy, so this is just a test. Unfortunately this point is where a lot of home arcade kits stop, but not us. However, confirming you are on the right track is a good motivator to continue.

Next Up: Control Panel

Comment on this post [6]
Share on Twitter or Facebook or use the Permalink
June 05, 2009 22:15
Very cool. I've never had any desire to do this until now. Thanks. You're giving me ideas that the Mrs. may not approve of. Oh well, it's still cool. Keep the ideas coming.

GunMD
June 05, 2009 22:28
If part 1 didn't make me want to rush home instantly and build it myself, part 2 is coming pretty darn close. This is getting better and better. You'll be hosting a Twin Galaxies session at your place next. :)

I'm sure at some point, there will be some software to make my LCD as crappy and blurry and ghosty as a real arcade monitor.

You can already do that!

PRMan - Fantastic find! I'll try those and see if it looks better or worse.