Building your own Arcade Cabinet for Geeks - Part 3 - Control Panel

This is the third part of a multi-part series I'm going to do about assembling an Arcade Cabinet for my house. This series has two disclaimers:

This part, the Control Panel, truly kicked our collective butts. We were rockin', working occasional evenings and making progress until we got here. This took probably 3 weeks (a day here and there, wait, a day here and there) and was a huge hassle. In retrospect, we know what we could do to make it easier on ourselves, but you live and learn.

Arcade Purists will say you should design your control panel custom, to suit your needs. You can visit a site like Happs Controls and buy the buttons and sticks and trackballs and what not, all to your specs. You can then buy a PCB Board that will let you map your buttons to keyboard strokes. Ultimarc has one called the I-PAC that seems to be the standard. If you like wiring and customization, this could be a good choice for you.

Buttons and Sticks the Easy Way

However, on this project I was really trying to find a balance, and stay cheap and pragmatic but with an eye on quality. So I decided to do a combination. I bought the Tankstick from X-Arcade with the plan to take it apart and install it into the original control panel that came with my arcade cabinet shell. 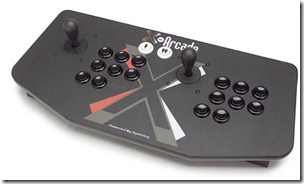 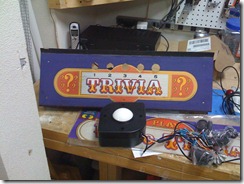 You can see from the picture on the right that I attempted to make a trackball fit, but ended up sending it back. It just was too large.

Instead, I took part the X-Arcade stick and used its wood top as a template for my stock steel control panel. I took a piece of Plexiglas and made a template out of it. Unfortunately this kind of acrylic is very hard to drill and I cracked two before I gave up. More on the plastic later. 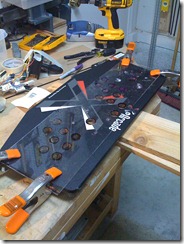 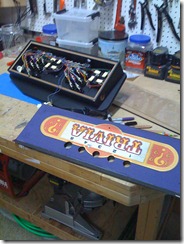 Then, John and I transferred our button layout to the original steel panel with a Sharpie Pen. We got a bit-metal "hole saw," is is apparently what you call a big drill bit. It's a 29mm hole, which is standard for arcade controls. We had 19 to drill. 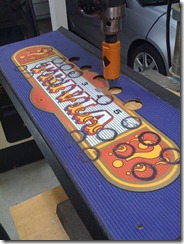 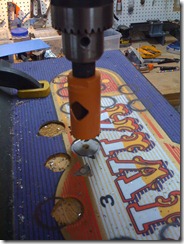 The drill bit lasted exactly 1 and 1/2 holes before it burned up. After the fact we learned that there are specific RPMs (speeds) that you should drill steel and we were drilling WAY to fast. I bought another drill bit and we got through a few more, but the drill press we were using wasn't strong enough to hold on to the bit. I wouldn't want to try this with a hand-held drill.

At this point, I had a choice. Spend more money on a drill and/or more bits, or enlist the help of a professional. I went to a local "machine shop" and told them to do their best. 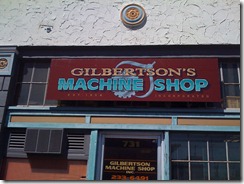 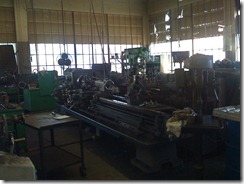 They thought what I was doing was pretty funny, but they sure nailed it. The result was laughed at on Twitter, but it looked great to us. 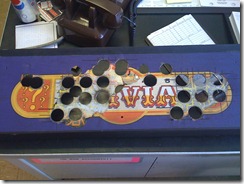 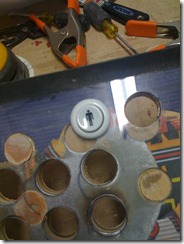 It looks funny, like there's too many holes because there are too many! There were a few holes underneath the vinyl. Apparently the Video Trivia game had been ANOTHER game before! However, none of the holes were positioned in any way that would compromise the structure of the steel. Notice the Player 1 button in a new hold intersecting with an old hole. No problems.

Now, we need to make a sandwich. First steel, then new vinyl art, then an acrylic/Plexiglas layer.

We thought we'd need a piece of wood to stabilize the whole panel and give the buttons something to hold on to, but we underestimated how strong the steel was. Even though we added piece of wood underneath, we ended up abandoning it as a waste of time. 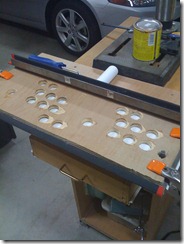 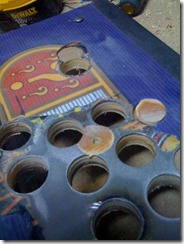 However, drilling all those holes in the wood wasn't a waste. We used the filler pieces of holes to fill up the holes that we didn't need. We put them in the holes and used an orbit sander. This provided a smoother surface for the vinyl to lie on.

Back to the Plexiglas. I tried to drill a bunch and just couldn't get it right. We'd do a bunch of holes and it would crack. After the fact, we learned there are specially designed drill bits for drilling holes in this kind of acrylic. Again, hindsight is 20/20, but live and learn.

Again, to a pro. I called a local plastics shop and they said if I gave them a Corel Draw file that was accurate to a 1/2 mm that they could cut it with freakin' lasers. 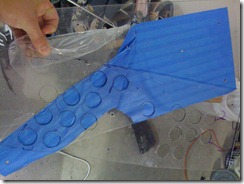 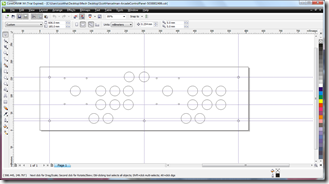 Awesome. Since I love lasers, all the better. I downloaded the Corel Draw 30-day trial and got to work with a small ruler. I measured the heck out of my stuff, praying I wouldn't be off by a millimeter and have things not line up. Here's the EPS and Corel Draw files if you want them.

Turns out I nailed it. I was off by less than a half millimeter in a few spots, but nothing that we couldn't work around with a small hobby razor blade.

I'll talk about Art in Part 5, but I have to mention it here as it's part of the sandwich. We ordered art from Scott at Mame Marquees and were thrilled with the results. 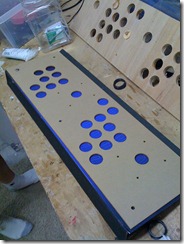 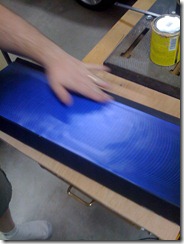 With the vinyl applied to the cut steel, I used the hobby knife to cut the holes for joysticks and buttons.

Next, John and I took the X-Gaming Arcade Stick apart on his counter. We labeled each button so we could put it back together in the SAME way inside our control panel. We also took a LOT of high-res photos as a reference. 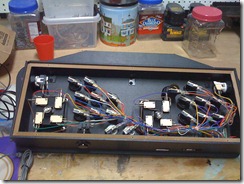 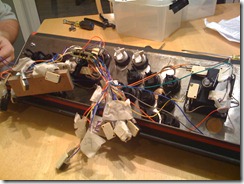 The picture on the left is the inside of the X-Gaming stick as we purchased it. The right side is the buttons, controller board and joysticks. Note there are a few buttons that don't go in the control panel like the side flippers, programming switch and learn button. 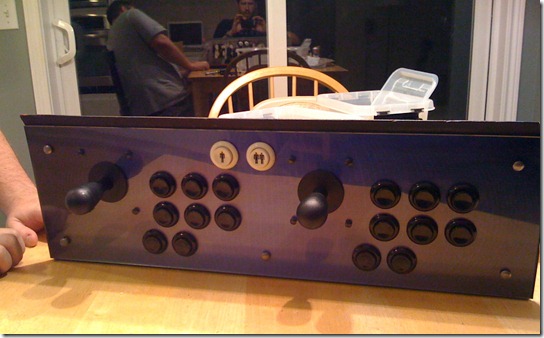 At this point we have the exact guts of an X-gaming Arcade Stick inside our stock control panel. The controller for the thing includes a PS/2 port, so as long as my computer has a PS/2 port (or I get an X-Gaming USB or Xbox adapter, etc) then it'll just look like a keyboard to the system.

Next Up: Sound and Lights

Comment on this post [4]
Share on Twitter or Facebook or use the Permalink
June 06, 2009 0:31
"Turns out I nailed it. I was off by less than a half millimeter in a few spots, but nothing that we couldn't work around with a small hobby razor bland."

Scott Hanselman
June 06, 2009 11:40
For those following Scott's advice, don't use acrylic, use Lexan. You can drill or cut to your heart's content and it will never crack. That's what real arcade games use.

The wiring looks to be the same whether you use real buttons and an IPAC or the Tankstick.

PRMan
June 22, 2009 21:18
Bear in mind that games designed for 4 way joysticks will often play poorly with an 8 way joystick (and vice versa obviously). If you want support for both types of games with a single stick, an analog joystick like the Ultimarc Ultrastik 360 is great because you can either configure the Ultimarc software to emulate the kind of joystick needed for a particular game (2 way, 4 way, 8 way, whatever) or rely on MAME to do that for you automatically.