Clean up your Temp Files 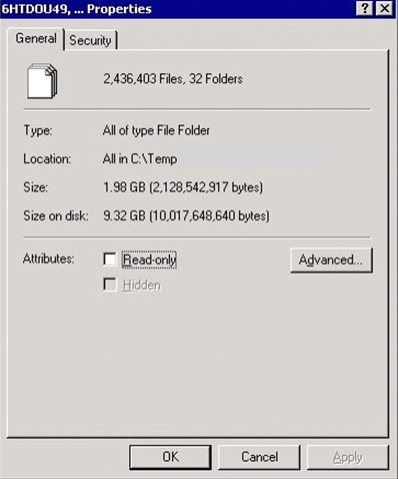 I was doing some tidying up on a website for a family friend recently. His ASP.NET application was taking longer and longer to start up. It also happened to use a lot of XmlSerializers, and of course, as an ASP.NET app, there's a lot of page-by-page compilation as he's not on 2.0 and doesn't use aspnet_compiler.

Additionally, there's some code that this client wrote that writes out temp files but doesn't clean up after themselves. When there's this many files in a folder, calls to GetTempFileName can block for many seconds.

Not only can "excessive temp file growth" cause pain at runtime, but it'll easily crush Explorer.exe's usefulness. It'll also become impossible to apply Attributes to the folder.

The point is, that there's a few folders that you need to watch out for file growth in.

I like to modify the options inside Microsoft Drive Cleanup using Shawn A. Van Ness's registry file. You can extensively modify what appears in the Drive Cleanup list, even adding your own file types and your own application-specific directories and files that you might want cleaned up.

Check out your own systems...drop out to a command prompt (cmd.exe) and do:

Tidy up, my friends.

I'm an Anonymous Coward
February 17, 2007 0:11
That's nothing! Find someone who hasn't run spyware on their computer. Holy bejeezuss. Figure 100+ if this person browses at all.

John A. Davis
February 17, 2007 2:41
The other benefit of that Perl script I posted is that it doesn't get hung up on files that it can't delete (ususally b/c a process has some temp file locked). It just moves along to the next one.

I'm an Anonymous Coward
February 17, 2007 3:38
Crap Cleaner (ccleaner)is the only way to fly for all kinds of sqeaky clean goodness. isnt it already on your tools list? if not, why not? :)

Some Kind of anonymoose
February 17, 2007 3:38
Crap Cleaner (ccleaner)is the only way to fly for all kinds of sqeaky clean goodness. isnt it already on your tools list? if not, why not? :)