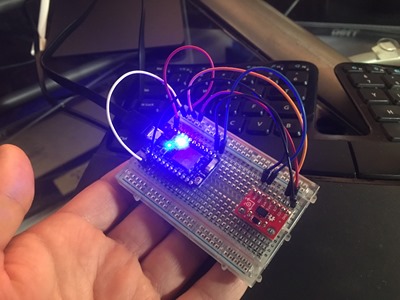 My vacation continues. Yesterday I had shoulder surgery (adhesive capsulitis release) so today I'm messing around with Azure IoT Hub. I had some devices on my desk - some of which I had never really gotten around to exploring - and I thought I'd see if I could accomplish something.

I've got a Particle Photon here, as well as a Tessel 2, a LattePanda, Funduino, and Onion Omega. A few days ago I was able to get the Onion Omega to show my blood sugar on a small OLED screen, which was cool. Tonight I'm going to try to hook the Particle Photon up to the Azure IoT hub for monitoring.

The Photon is a tiny little device with Wi-Fi built-in. It's super easy to setup and it has a cloud-based IDE with tons of examples written in C and Node.js for you to use. Particle Photon also has a node.js based command line. From there you can list out your Photons, see their available functions, and even call functions over the internet! A hacker's delight, to be sure.

Here's a standard "blink an LED" Hello world on a Photon. This one creates a cloud function called "led" and binds it to the "ledToggle" method. Those cloud methods take a string, so there's no enum for the on/off command.

See how it doesn't just enumerate devices, but also cloud methods that hang off devices? LOVE THIS.

I can get a secret API Key from the Particle Photon's cloud based Console. Then using my Device ID and auth token I can call the method...with an HTTP request! How much easier could this be?

At this moment the LED on the Particle Photon turns on. I'm going to change the code a little and add some telemetry using the Particle's online code editor. 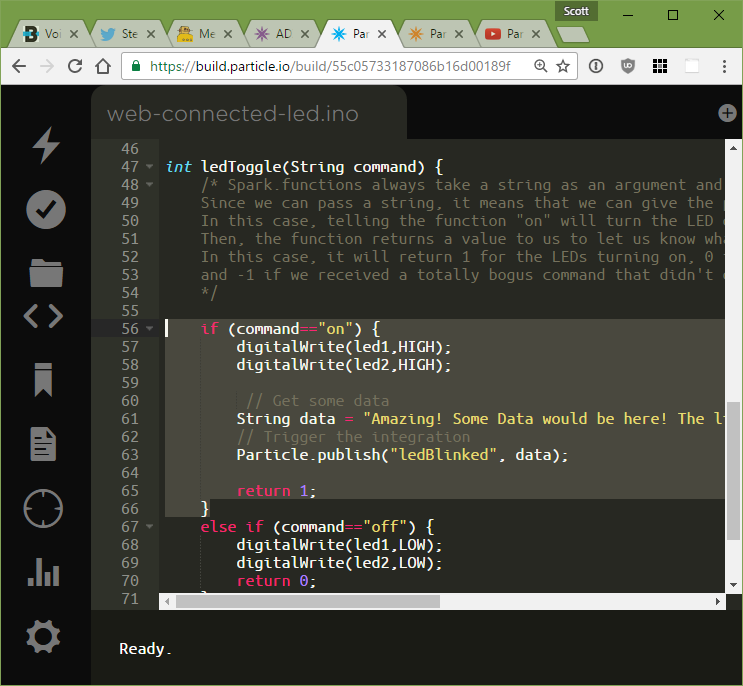 They've got a great online code editor, but I could also edit and compile the code locally:

I'll change the code to announce an "Event" when I turn on the LED.

I can head back over to the http://console.particle.io and see these events live on the web:

Particle also supports integration with Google Cloud and Azure IoT Hub. Azure IoT Hub allows you to manage billions of devices and all their many billions of events. I just have a few, but we all have to start somewhere. ;)

I created a free Azure IoT Hub in my Azure Account... 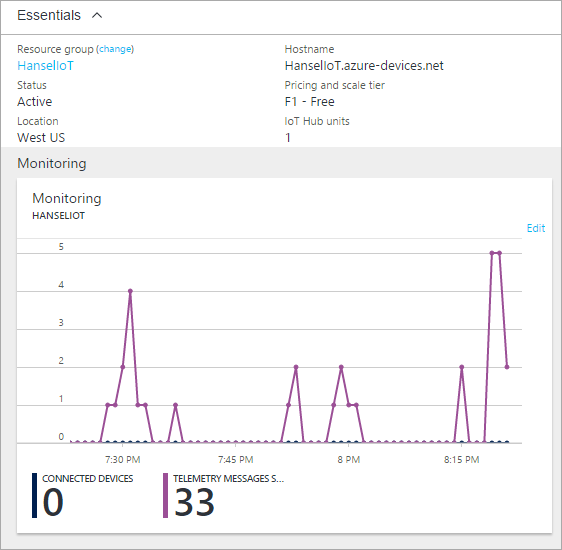 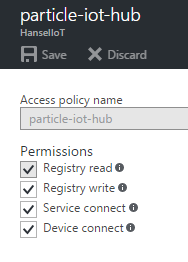 Then I told Particle about Azure in their Integrations system. 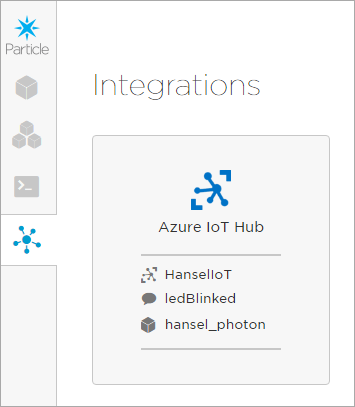 The Azure IoT SDKS on GitHub at https://github.com/Azure/azure-iot-sdks/releases have both a Windows-based Azure IoT Explorer and a command-line one called IoT Hub Explorer.

I logged in to the IoT Hub Explorer using the connection string from the Azure Portal:

Then I'll run "iothub-explorer monitor-events" passing in the device ID and the connection string for the shared access policy. Monitor-events is cool because it'll hang and just output the events as they're flowing through the whole system.

So I'm able to call methods on the Particle using their cloud, and monitor events from within Azure IoT Hub. I can explore diagnostics data and query huge amounts of device-to-cloud data that would potentially flow in from my hardware devices.

I can definitely see how the the value an IoT Hub solution like this would add up quickly after you've got more than one device. Text files don't really scale. Even if I just IoT'ed up my house, it would be nice to have all that data flowing into a single hub I could manage and query securely.

Sponsor: Big thanks to Telerik! They recently published a comprehensive whitepaper on The State of C#, discussing the history of C#, what’s new in C# 7 and whether C# is the top tech to know. Check it out!