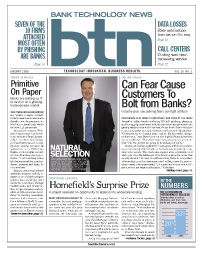 You may read this blog and wonder, what the heck does Corillian (and Scott) do? If so, check out the cover story of this month's Bank Technology News to learn more about the industry. That's our CEO there on the front.

Corillian, with four top-10 banks-JPMorgan Chase & Co., Wachovia, SunTrust, Washington Mutual-and 28 of the top-100 running on its platform, has more than doubled its end-user base since 2003, to over 25 million.

When Corillian snared Wachovia's platform business in late 2004-a switch from its own internally developed system-"we spent about 15 minutes congratulating each other, then went back to work," says CEO Alex Hart. "It's part of the natural evolutionary process. We're a real company now."

That quote totally sounds like Alex. All in all, it's a pretty decent article, more about finance, our competition, the potential future, the space we're in, and a bit about the technology.

Dave Purrington
January 06, 2006 22:03
Scott's too humble to say it, but the article says this about Corillian's technology:

That's quite an accomplishment!