.NET Core is cross-platform and open-source. Tell someone, maybe your boss.

A good reminder. It's been this way for a half decade but I'm still bumping into folks who have never heard this. Moving forward, .NET 5 will be a unification of the .NET Framework you may have heard for years, and the new .NET Core I like talking about, PLUS great goodness, tools and libraries from Mono and Xamarin. It's one cross-platform .NET with a number greater than 4. Because 5 > 4, natch.

Now you've made some software, maybe for Windows, maybe Mac, maybe Linux. There's a lot of ways to diagnose your apps in .NET Core, from the Docs:

But I want to talk about the...

Now that I've installed it, I can see what .NET Core apps I'm running, like a local version of my Hanselminutes podcast site.

I also see PowerShell 7 in there that I'm running in Windows Terminal. Pwsh is also written in cross platform .NET Core.

I'll run it again with a process id, in this case that of my podcast site:

Here I'll get a nice constantly refreshing taskman/processmonitor of sorts in the form of dotnet-countersperformance counters: 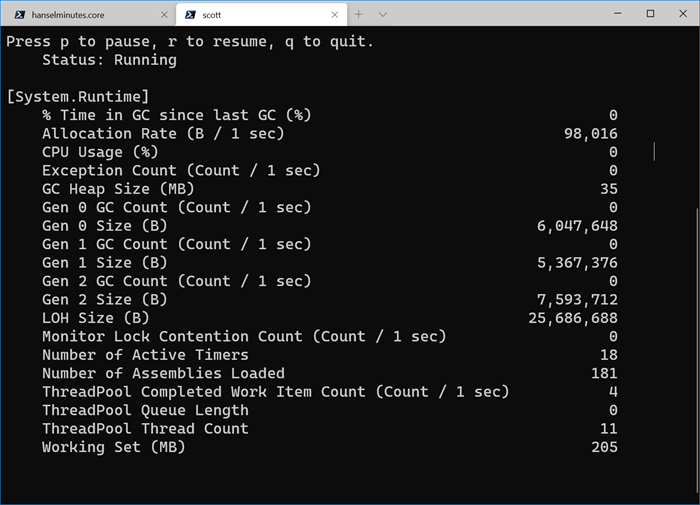 Again this works outside Visual Studio and it works everywhere. You can watch them and react, or collect them to a file.

With a similar syntax, I'll dump the process:

Then I'll start an interactive analysis shell session. You can run SOS (Son of Strike) commands to analyze crashes and the garbage collector (GC), but it isn't a native debugger so things like displaying native stack frames aren't supported.

There's tons to explore. Debugging production dumps like this is a lost art.

You can also do live Garbage Collector dumps with

"a way to collect GC (Garbage Collector) dumps of live .NET processes. It uses the EventPipe technology, which is a cross-platform alternative to ETW on Windows. GC dumps are created by triggering a GC in the target process, turning on special events, and regenerating the graph of object roots from the event stream. This process allows for GC dumps to be collected while the process is running and with minimal overhead."

Once you have a dump you can analyze it in Visual Studio or PerfView on GitHub.

Sometimes you may capture a dump from one machine and analyze it on another. For that you may want to download the right symbols to debug your core dumps or minidumps. For that you'll use

This is great for Linux debugging with lldb.

"Running dotnet-symbol against a dump file will, by default, download all the modules, symbols, and DAC/DBI files needed to debug the dump including the managed assemblies. Because SOS can now download symbols when needed, most Linux core dumps can be analyzed using lldb with only the host (dotnet) and debugging modules."

Interesting in some real tutorials on how to use these tools? Why not learn:

In the next blog post I'll look at dotnet trace and flame graphs!

.NET Core is cross platform (sic) and open source (sic). Tell someone, maybe your boss. A good reminder. It's been this way for a half decade but I'm still bumping into folks who have never heard this.

So, you're asking us to do some pro bono advertisement for Microsoft? That entails putting our own reputations on the line. It becomes mortally dangerous when Microsoft has put the following on Channel 9:

For .NET Framework, you can only have one version of the framework installed on the same machine, which is used by all applications. ... This behavior might result in regressions. For developers, it usually means that the Framework upgrade was a company-wide decision performed by the IT department, which sometimes, delays the upgrades.

I watch this video on a machine that had several versions of .NET Framework installed side-by-side. And I'd rather my boss stayed away from that video, least he believes those technically erroneous assertions and give me a chashiering for not keeping him in the loop for "a company-wide decision" that "might result in regressions"!

At least, do us a favor and spell "open-source" and "cross-platform" correctly. ("Open-source" is an adjective, while "open source" is a noun group with rare uses. "Cross platform" is just wrong.)

Fleet Command
September 20, 2020 5:58
Fleet Command - You're talking about the Windows-only .NET Framework and your quoted item refers to that. The 4.x versions of the .NET Framework that Olya refers to does only allow one major version at a time. You may have 2 and 4 on your machine, but you don't have 4.6 and 4.7 etc on that same machine.

.NET Core is in fact, cross platform, and runs anywhere, and you can have many versions of .NET Core installed AND if you like, an app can even have it's own private version.

Scott Hanselman
September 20, 2020 22:13
Hi Scott, quick question: Do you know if there is any library I can add to my projects that give me the same information I get with counters? I usually have several stats reported to a grafana dashboard and I would love to have that information there too.

Thanks in advance and regards,

Marcelo Volmaro
September 22, 2020 4:36
@Marcelo Volmaro you don't require any external library to consume counters within your application. See this document on how to use the EventListener API to listen to counters in-process. You can use a library like prometheus-net-contrib to expose these metrics and then use a tool like prometheus/telegraf to collect this data and export to grafana.

If you want to consume the counters from an external process (like dotnet-counters), you'll want to use the Microsoft.Diagnostics.NETCore.Client package to communicate with the diagnostics server. I'd recommend looking at the dotnet-counters source for how to do so.

Sourabh Shirhatti
September 24, 2020 1:31
NET Core is cross-plat form and open-source. Tell someone, maybe your boss.
A good reminder. It's been this way for a half decade but I'm still bumping into folks who have never heard this.


Apart from a subset of developers and IT reps, no one pays attention to new version releases. Business want the technology to work, be low cost, not have forced upgrades every two and a half years, be easy to deploy and easy to manage.

Case in point, what is the business critical new feature which is going to be in .net 5? The list of improvements, once you exclude purely technical things such improved performance, unified code base, better cross-platoform, web assembly handling and such has little left to make a business case for upgrading to .net 5.

One of the great things about .net core and .net 5 is that you can bundle the framework with the tool that uses it. That is really freeing in our company for LOB apps as we are no longer dependent on getting .net updated on user's machines which can be a pain. The tools take up more hdd space, but that's not a big problem for us.

Mark Adamson
September 26, 2020 17:13
Hello! I had been having a really rough time lately and Alison has helped me out a lot. Even when I had not said anything for a while, she still made sure to check up on me to make sure I was ok, which I really appreciate. I feel very safe opening up to him and would propose Calmerry services to everyone who needed somebody to talk to!!!

https://calmerry.com/blog/depres
November 02, 2020 21:48
I just couldn't go away your website prior to suggesting that I extremely loved the
usual information a person supply on your guests? Is gonna be again continuously in order to investigate cross-check new
posts