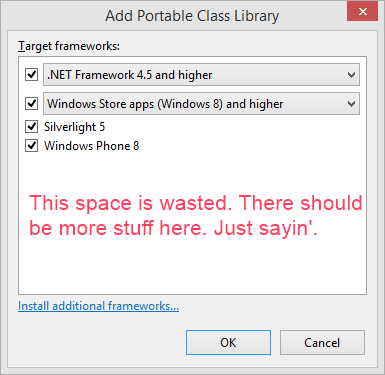 Portable Class Libraries are the Happy Little Feature that Could. They've been chugging along, doing their thing, and it's getting to the point where they are going to pop. That's pop in a good way.

If you're not writing .NET apps for more than one target, then you likely haven't bumped into them. However for those people who are writing .NET and want it to run on everything from Watches to Phones to Tablets to Xboxen to Desktops to the Cloud, they are enjoying what PCLs can offer.

There's still a few technical and legal challenges but I'm confident they'll be dealt with and we'll be able to create great binary libraries that can be used everywhere.

First of all, there have been a bunch of new libraries released as PCLs recently.  Three of them are from GitHub's own Paul Betts:

I might be getting a little obsessed with PCLs at the moment. #IHaveAProblem (link).

Another new portable library release is Budgie, a library for accessing Twitter. The .NET and Azure Teams have also released a PILE of Portable Libraries.

Not to mention all these excellent Portable Libraries that you should be familiar with as well.

and of course, my favorite, the HttpClient, making HTTP calls easier, since, well, since a few months ago.

One BUILD attendee took issue with the fact that speakers were telling people that you can't use platform specific functionality from a Portable Class Library, and wrote a blog post about how you can do this with abstraction and (preferably) dependency injection.

On at least 2 occasions recently, I have heard speakers tell their audience that you cannot reference a target-specific .NET library (such as a .NET Framework 4.5 library) from a Portable Class Library. While this is technically true, it doesn't tell nearly the whole story. Even though we can't reference target-specific libraries, we can still USE these libraries. We can call their methods and access their properties under the right circumstances. We can gain access to these libraries via an abstraction. My preferred method of doing this is...Dependency Injection.

There's lots of great examples of code reuse, like the podcast I did with the folks who wrote "Draw a Stickman EPIC." This app has 95%+ code reuse, all written in C# and is available in every App Store there is. Here's a few others. The British and Irish Lions app is a cross platform app targeting Windows Store, Windows Phone, iOS and Android. It uses Portable Class Libraries to share common code across platforms, Azure to host the services it uses, and the MvvmCross MVVM framework which I'm a huge fan of. The UK MSDN blog posted a case study of the development of the app, and there is also a prettier case study (with screenshots, infographics, etc) and a blog post by the developers.  In reference to Xamarin, MvvmCross, and Portable Class libraries, they state "Given the very short time-scales for the Lions apps (less than three months from the first line of code to our first release), we simply could not have delivered a rich native experience across all platforms without the common core." Another cross platform app that uses MvvmCross is Aviva Drive.  This is an insurance company app that you can use to track your driving habits and hopefully get a discount on your insurance.  The app was featured in the Tech Ed Europe day 1 keynote (about 28:40 in), focusing on how it used Azure.

On the game side of things, Taptitude is a successful Windows Phone 7 game (or rather, a collection of minigames) which was ported to Windows Phone 8, Windows Store, iOS, and Android with the help of MonoGame and Xamarin.  The team reports that they have more than 99% shared code between all the platforms, which is especially important to them because they ship updates to the game about every week. Xamarin has released an amazing .NET Mobility Scanner which analyzes code and tells you how "portable" it is and how compatible it will be with Xamarin.Android, Xamarin.iOS, Windows Phone, and Windows Store.  It lists all the APIs your code uses that aren't available on all the platforms, and an overall percentage of how portable your code is.  It's a very slick implementation and similar to what we've wanted to have for Portable Class Libraries.  Here's a sample report for the SignalR client library. The best part is that it does all this analysis without sending your code or binaries to Xamarin. It all happens in the browser. I love Xamarin.

Phil Haack (former PM for ASP.NET MVC and now working at GitHub) wrote a blog post titled Platform Limitations Harm .NET.  He argues that the Windows platform limitations should be removed from the EULAs for BCL NuGet packages.

I personally agree. Being able to reuse existing code, make portable libraries, and write apps that run in 64k or 64gigs is what makes .NET an interesting platform.

Comment on this post [28]
Share on Twitter or Facebook or use the Permalink
July 10, 2013 1:59
Portable Class Libraries bring with them some interesting artifacts that look odd when you open them in your decompiler of choice. They also have some trouble on machines that don't have the latest .NET patches on them.

I wrote up some Portable Class Library FAQs in response to common questions we get with Autofac. If you're publishing a PCL, it's good to know what you might run into.

Travis Illig
July 10, 2013 2:38
Nice one, just in time for my tryout with xamarin. That http client is great I used it with porting windows 8 code to WP 8. A real timesaver

How does the Eula of pcl apply to Reactive UI? As Phil says, you're not allowed, aren't you?

Oscar: There is some confusion; Phil Haack's blog is talking about our BCL packages that are built on top of .NET (using portable). These EULA's only apply to these packages (Microsoft.Net.Http, for example). There are no restrictions from Microsoft around what platforms 3rd-party portable libraries support.

Chris McGrath
July 10, 2013 9:22
Thanks for the shoutouts Scott! I actually just pushed out a new release of Splat today that adds support for cross-platform geometry primitives (i.e. Points, Rects, and Sizes). Not necessary for every app, but when you need it, not having it is **super** painful.

Oscar: All three of my libraries above are licensed under permissive licenses (RxUI is licensed under MS-PL, and both Akavache and Splat are under the MIT license). Reuse it wherever you want :)

Andy
July 10, 2013 17:05
According to this link , it is not permitted to use them on other operating systems , so what is the point from them then

If only PCL in the Micro Framework were possible. That would be great. PCL is probably not the problem but MF is.
I'm hoping we can get a complete new Micro Framework that aligns with the actual .net framework (and PCL).

David Kean
July 11, 2013 9:35
Taking bets on how long it will take for a "JavaScript" checkbox to appear on that dialog.

Aidan Ryan
July 11, 2013 15:30
Is there a guide on how Portable Libraries are implemented and what does it take to add another custom platform.?

One can use Saltarelle C# to Javascript compiler in combination with such a platform to output Javascript :0

liviu
July 11, 2013 16:00
Thumbs up for the love for PCL's!
I have used them in a few projects, and they can be very handy, especially with the new libraries rapidly coming out. Although very handy I have often noticed a few shortcomings. Also, they are not the only way to share code between platforms. I recently wrote a few articles with some tips on how to share code and when to choose what(especially for Windows Phone and Windows 8, but it can be extended to all platforms):

Patterns for sharing code in Windows Phone and Windows 8 applications

Sam
July 11, 2013 21:13
why there is no one agreement that all assemblies inherit it , that will make the life easier for developers and companies

Do you have performance benchmark C# vs F# vs Java Similar to this below URI
http://reverseblade.blogspot.sg/2009/02/c-versus-c-versus-java-performance.html

Is there any documentation on how to develop a platform for portable libraries?
I did not find any information about the internals...

liviu
July 17, 2013 1:57
I spoke at a user group last week and took five minutes aside to make a point about PCLs being the future for multi-plat development. I can now take this post and rub it in the face of that one co-worker who disagreed!

It all came from a MVVM project done using Ninject & JSON.NET with everything below the View layer in PCLS shared between a Windows 8 view project, a Windows Phone view project and then eventually a MVC website project. Now that PubSubEvents and Unity are PCLs, the real party is on!

Any word on Xamarin and PCLs? Building a single ViewModel layer shared between iOS, Android and Windows Phone would be amazing. I tried the hack that floated around last year and it didn't seem to work too well.

Sidney Andrews
July 18, 2013 7:36
Another great library to add to your list is Noda Time (www.nodatime.org), an excellent date/time library. The PCL version is a separate build, but it work great!

Matt Johnson
September 12, 2013 19:41
Hi Scott, unfortunately that wasted space you refer to can't be used until MS changes the licensing on many of their Nuget components (e.g. HttpClient) as these stipulate that they have to be used on Windows systems... making them far from portable!

Are you aware of this, and do you know whether this situation will change in the near future?

JasonBSteele
September 13, 2013 3:17
JasonBSteele - Yes, we're trying to remove that legal stuff as fast as we can. http://codebetter.com/howarddierking/2013/07/23/katana-license-lifts-windows-only-restriction/