When the engineers on the ASP.NET/.NET Core team talk to real customers about actual production problems they have, interesting stuff comes up. I've tried to capture a real customer interaction here without giving away their name or details.

As with many performance investigations, there were a variety of issues contributing to the slowdowns, but the largest contributors were time spent garbage collecting (due to unnecessary large object allocations) and blocking calls that could be made asynchronous.

After resolving the technical and architectural issues detailed below, the customer's Web API went from only being able to handle several hundred concurrent users during load testing to being able to easily handle 3,000 and they are now running the new ASP.NET Core version of their backend web API in production.

The customer recently migrated their .NET Framework 4.x ASP.NET-based backend Web API to ASP.NET Core 2.1. The migration was broad in scope and included a variety of tech changes.

Their previous version Web API (We'll call it version 1) ran as an ASP.NET application (targeting .NET Framework 4.7.1) under IIS on Windows Server and used SQL Server databases (via Entity Framework) to persist data. The new (2.0) version of the application runs as an ASP.NET Core 2.1 app in Linux Docker containers with PostgreSQL backend databases (via Entity Framework Core). They used Nginx to load balance between multiple containers on a server and HAProxy load balancers between their two main servers. The Docker containers are managed manually or via Ansible integration for CI/CD (using Bamboo).

Although the new Web API worked well functionally, load tests began failing with only a few hundred concurrent users. Based on current user load and projected growth, they wanted the web API to support at least 2,000 concurrent users. Load testing was done using Visual Studio Team Services load tests running a combination of web tests mimicking users logging in, doing the stuff of their business, activating tasks in their application, as well as pings that the Mobile App's client makes regularly to check for backend connectivity. This customer also uses New Relic for application telemetry and, until recently, New Relic agents did not work with .NET Core 2.1. Because of this, there was unfortunately no app diagnostic information to help pinpoint sources of slowdowns.

One of the most interesting takeaways for me was not the specific performance issues encountered but, instead, the challenges this customer had working in a Linux environment. The team's developers are experienced with ASP.NET on Windows and comfortable debugging in Visual Studio. Despite this, the move to Linux containers has been challenging for them.

Because the engineers were unfamiliar with Linux, they hired a consultant to help deploy their Docker containers on Linux servers. This model worked to get the site deployed and running, but became a problem when the main backend began exhibiting performance issues. The performance problems only manifested themselves under a fairly heavy load, such that they could not be reproduced on a dev machine. Up until this investigation, the developers had never debugged on Linux or inside of a Docker container except when launching in a local container from Visual Studio with F5. They had no idea how to even begin diagnosing issues that only reproduced in their staging or production environments. Similarly, their dev-ops consultant was knowledgeable about Linux infrastructure but not familiar with application debugging or profiling tools like Visual Studio.

The ASP.NET team has some documentation on using PerfCollect and PerfView to gather cross-platform diagnostics, but the customer's devs did not manage to find these docs until they were pointed out. Once an ASP.NET Core team engineer spent a morning showing them how to use PerfCollect, LLDB, and other cross-platform debugging and performance profiling tools, they were able to make some serious headway debugging on their own. We want to make sure everyone can debug .NET Core on Linux with LLDB/SOS or remotely with Visual Studio as easily as possible.

The ASP.NET Core team now believes they need more documentation on how to diagnose issues in non-Windows environments (including Docker) and the documentation that already exists needs to be more discoverable. Important topics to make discoverable include PerfCollect, PerfView, debugging on Linux using LLDB and SOS, and possibly remote debugging with Visual Studio over SSH.

Once we gathered diagnostics, most of the perf issues ended up being common problems in the customer’s code.

As shown in the graph below, at the end of our performance tuning, their backend was easily able to handle 3,000 concurrent users and they are now using their ASP.NET Core solution in production. The performance issues they saw overlapped a lot with those we’ve seen from other customers (especially the need for caching and for async calls), but proved to be extra challenging for the developers to diagnose due to the lack of familiarity with Linux and Docker environments. 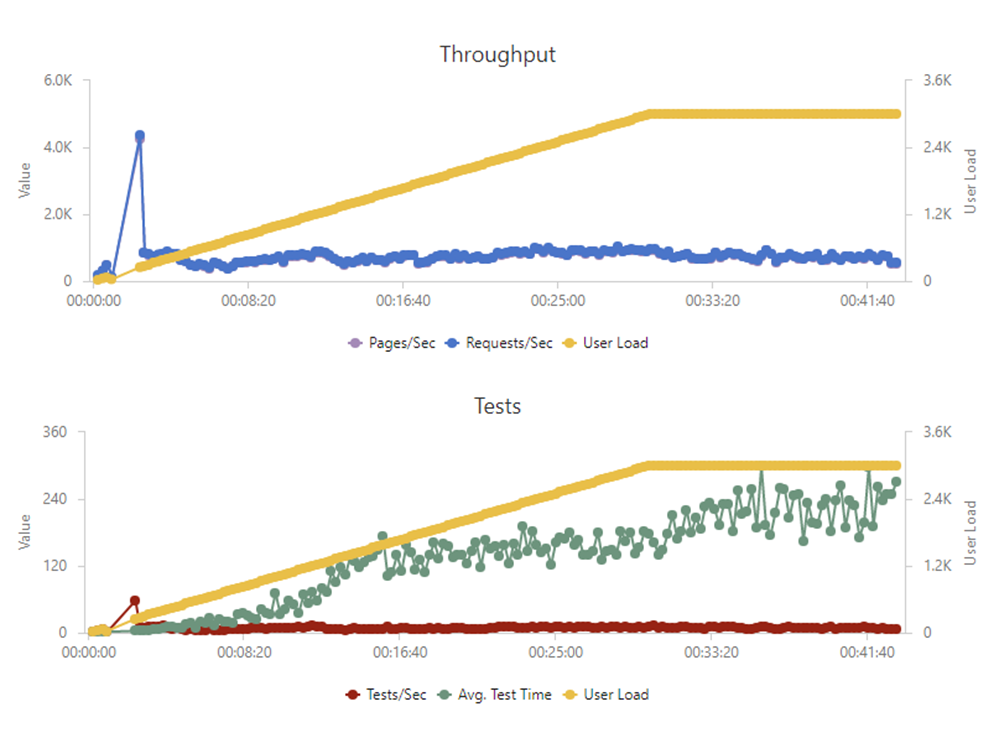 Some key areas of focus uncovered by this investigation were:

Hope you find this useful! Big thanks to Mike Rousos from the ASP.NET Core team for his work and analysis!

Comment on this post [16]
Share on Twitter or Facebook or use the Permalink
October 16, 2018 20:47
The problems that were found do not appear to be ASP.NET Core specific, but rather sound like general issues that happen to exist in the codebase anyway. What are the real ASP.NET Core specific issues/pitfalls that are relevant in this context?

Sebastiaan Dammann
October 16, 2018 21:24
I don't find it surprising windows devs had trouble debugging prod issues running in Linux Docker containers. I would be in the same boat.

What is the relational for moving to an ASP.NET Core 2.1 app in Linux Docker containers with PostgreSQL backend databases (via Entity Framework Core)? Speed, I suppose?

I think sometimes .net strength is also it's weakness. Often there are so many ways to achieve the same result, but it's sometimes hard to identify which one is the correct and more performant way of doing it. i.e. HttpClient instances should be re-used

I was really interested to hear about the AsyncUsageAnalyzers project. Perhaps you could do a post on this, it could be beneficial for a lot of people

Dotnetshadow
October 17, 2018 2:16
It sounds like the move to Linux hosts is the classic case of a business being penny wise but pound foolish. Sure, they can save a few thousand a year in OS/Sql Server license costs, but they have a team of individuals that don't know their way around Linux or Postgres.

If the reasonably priced Windows/Sql Server license costs make or break your company, you need to start making more money.

BrianH
October 17, 2018 2:29
@Sebastiaan Dammann, that's a good point. In fact, ASP.NET Core itself performed well in this case. Most of the issues that were uncovered were existing problems that were discovered thanks to more rigorous load testing during the migration.

I think the interesting thing about the scenario is less about perf concerns specific to ASP.NET Core and more about the challenge of diagnosing them in a new environment (Linux Docker).

Mark Rendle
October 17, 2018 12:51
Thanks. This is a very useful post. We have transitioned to .Net Core in Linux Docker Containers using Postgres and I am lacking the production support skills I have with .Net on Windows.

Jerry
October 17, 2018 15:38
It's not clear to me, were these performance problems introduced by changing code in order to move to core? Or were these problems also present in the previous codebase and only became an issue with the move to core?

That Blair Guy
October 17, 2018 18:53
@That Blair Guy, the issues weren't introduced by the .NET Core migration. They were existing issues that came to light with more rigorous load testing done as part of the migration. It was interesting working with the customer to pinpoint the root causes in this new environment, though.

Mike Rousos
October 17, 2018 20:48
Great article Scott,
I have been working through a few issues my self, so this was very timely.

This is another good article I found on the topic https://codeblog.dotsandbrackets.com/net-core-memory-linux/

Glenn Morton
October 19, 2018 15:11
There should be one way to handle this in .NET WebAPI and the framework/.NET should enforce that.

Adopt a mission statement: "When there are two ways of doing something in ASP.NET Core, we pick one and deprecate/remove the other."

Microsoft has for the last 10 years gone the other way with always adding yet another way to do the same thing and not removing the old way of doing it.

Todd
October 20, 2018 18:37
Issue #1 scares me the most. How else could the garbage collection have been reduced if the caching technique used wasn't possible?

It seems like there should be a dead simple way to declaratively release the memory of an object as soon as its usage is known to not be needed anymore without waiting for the GC to do it, or that reference types should adopt some struct behaviors under certain conditions. For example, if creating a local string object in a method that never leaves the scope of that method, I'd hope it would follow struct semantics and be stored on the stack and get deallocated immediately when the method is exited, but I assume/suspect it stays in the heap and only gets deallocated when the GC runs.

Alan
October 22, 2018 18:10
I too have run into quite a few performance issues with trying to get a micro-services architecture running well with Asp.Net Core on Linux.

It took me a long time to find this comprehensive list of .Net Core CLR configuration knobs. Once I discovered this, a whole new world opened up for tweaking and measuring performance via Environment Variables. This is how I found GC Server is off by default and turning that on made a big difference.

I also ran into an odd issue described here where service-to-service calls were reporting wildly different durations between the caller and callee. The issue was a kubernetes / docker setting on CPU limits that was causing our containers to be paused frequently.

These are just more examples of knobs that traditional .Net Windows / Azure PaaS developers are not used to needing to adjust and realizing how much impact they actually have.

Tyler Ohlsen
October 25, 2018 4:44
We use SQL Server instead of Oracle because SQL Server has much less performance knobs to tune and auto-tunes better than Oracle. Oracle has a large number of things to fine tune.

Same should go for development, less tuning options, less hidden features and result in less of these esoteric known only to a few time and money sink bugs in core.

It's Oracle
October 25, 2018 4:45
Itsѕ excxellent as үour other blog poѕts
: D, regards foor posting . "History is a pact between the dead, the living, and the yet unborn." by Edmund Burke.

Reitz
October 26, 2018 11:39
@Alan the proper solution to this is buffer pooling. Reuse allocated byte arrays.
It is also widely used in non-GC environments to avoid heap fragmentation and allocation costs.