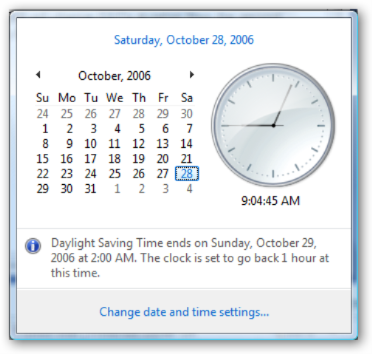 We have to change our clocks on Sunday here in the US, but if you're running a server, you need to know about this:

[Folks across the country] can look forward to an extra hour of sleep as clocks turn back one hour in observance of daylight savings time at 2 a.m. Sunday morning.

The time shift occurs twice per year in North America: one hour is lost on the first Sunday in April, and the hour is gained back on the last Sunday in October. This policy was enacted by the Uniform Time Act in 1966.

Lawmakers made recent changes that will extend DST four to five weeks beginning in 2007. The Energy Policy Act of 2005 will change DST’s duration from the second Sunday of March to the first Sunday in November. Those in favor of the change said the US will save on energy costs by taking advantage of the extra hour of sunlight during the extended period.

It'll save on energy costs, but I wonder what the IT cost will be. Windows folks can check out http://www.microsoft.com/windows/timezone/dst2007.mspx for more details. Thanks to Tim Heuer and Bill Evjen for the pointers! A test version of the patch is available through support as KB924840.

Windows XP SP2 and Windows Server 2003 will require the update. Windows XP SP1 and older operating system versions have passed their end of support dates and will not be receiving the update. Windows 2000 has passed the end of mainstream support and will not be receiving an update without an Extended Support Hotfix Agreement. Find more information about support policies around hotfixes.

So all you Windows 95, 98, ME, and 2000 folks, be prepared to be an hour off until you notice it and change it yourself. I predict 15 minutes until someone writes a freeware utility to fix this problem themselves. Will it be me? Nope, I'm taking Z to the Children's Museum.

Comment on this post [7]
Share on Twitter or Facebook or use the Permalink
October 28, 2006 16:32
This has got me all confused. I was thinking that DST was the period of time during the winter. Why would we need to save daylight during the summer?

Jim Corey
October 28, 2006 18:17
The day that the changeover occurs is stored in the registry (on XP), I believe it is the same on some older machines too.
All someone needs to do is come up with the correct offsets for those older machines. Shouldn't be difficult for someone to modify the keys found at: 'HKLM\SYSTEM\CurrentControlSet\Control\TimeZoneInformation' in order to support it.

The DEFAULT definition of the time zone is stored in the following registry subkey:
HKEY_LOCAL_MACHINE\SOFTWARE\Microsoft\Windows NT\CurrentVersion\Time Zones

Then, if you change the time zone by using the Date and Time item in Control Panel, the daylight saving time start and end dates for the time zone that you modified are reset to the default values (in "Time Zones", not "Time Zone Information").

Excuse me?!? I happen to live in the good part of the U.S. where we don't have to change our clocks...

Too bad Arizona is one of the few places left that understand how silly it is to change your clocks twice a year.

Besides, we don't need to save any daylight; we have plenty of it to go around!

Eric
November 07, 2006 0:30
Even though Microsoft isn't supporting older versions of their Windows operating systems anymore, the Daylight Savings Time problem is easy to fix with the tzedit.exe utility that came in the Resource Tool Kit on the Windows installation CD. The program has a convenient graphical interface, so you won't have to work with a command-line utility. Change the data for the following zones only:

Begining in 2007, Daylight Savings Time starts on the second Sunday in March and ends on the first Sunday in November.

The tzedit.exe program writes directly to the Windows registry. You may want to export the Time Zones branch of the default registry to a .reg file before running it. After you make the edits, you can save the modified Time Zones branch to a new file, then edit the .reg file with Notepad, chopping out all the keys and data except the ones that pertain to the aforementioned four time zones. You'll wind up with a small (~1.05 kB) .reg file that can be used to patch all your oldie MS Windows 95/98/98SE machines without having to run tzedit on every one of them. To apply the patch on such machines, simply double-click on the .reg file icon, and Windows will apply the changes automatically.