Defragmenting your Calendar and your Outlook

It's a double-meeting that! Get it? "Outlook?"

Seriously, though, sometimes folks comment on my busy schedule and I joke that I'm "playing tetris with Outlook" where appointments are falling blocks and I'm twisting and turning them and trying to make it all fit. I also often take some time and actively defrag my calendar.

Defraggging your system's disk usually happens automatically - in the past it didn't - as background processes attempt to "reduce the fragmentation of (a file) by concatenating parts stored in separate locations on a disk." That's a techie explanation.

Here's a basic one. Ever look at your bookshelf and you've got no system? Books all over, no plan. Even worse, imagine someone ripped a book in half along the spine and stored half the book on the top and the rest on the bottom shelf? Why, you'd be scandalized and you'd want to tidy up.

Sometimes folks organize their books by color, sometimes by topic, usually by author. Point is, it can get messy, and you need to take a moment to get organized. The result is a nice tidy bookshelf that has less psychic weight and where the books you want are where you can get to them quickly.

Why not do the same to our calendars? Often we'll just look for an open lot and a 30 min meeting will just drop in there, like an unwanted Tetris piece. If we had more time and energy we might be more aggressive and put the meeting (especially if it's a recurring meeting) in a specific slot.

For example, if you're a coder and you enjoy getting into the flow, avoid putting a meeting in the middle of that flow.

If you are mentoring people - perhaps like me you have a half dozen - then put them all on the same day so your brain is in "mentoring mode." Batch up your code reviews. Make email management an appointment. Is Tuesday creative day? What about No-Meetings Mondays?

Also, make sure you're color coding - just like the defragger! I use categories in my calendar and give meaning to each color so I can easily and quickly tell at a glance if this is a "Balanced Week" or if it's gonna feel weird. If you use colors that clash next to meetings with topics that clash then you can mentally prep yourself for the Context Switch. 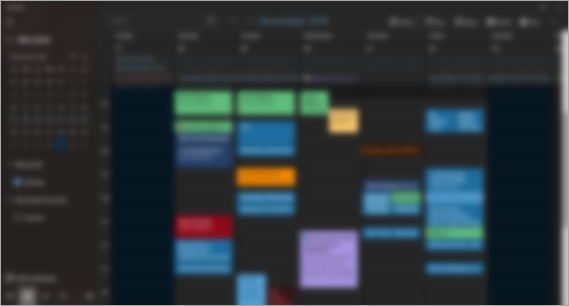 What do YOU want your defragmented calendar to look like? Typically it takes just willpower and awareness to defrag your calendar. And just like disk defragmenting, things might run slower for a bit while you're doing it, but the result will be neater and tidier and allow you to be more effective! It'll also, ahem, improve your Outlook.

Bryant Likes
December 05, 2019 21:24
Well done, thanks for the reminder to categorize my meetings. I recently jumped into a role where I have a legion of meetings and this will help.

Jeff Bailey
December 05, 2019 22:17
There was certainly something catarthic about watching the old defragmenters do their work moving the blocks around the screen, even going back to the DOS versions of SpeedDisk.

Greg Williams
December 06, 2019 8:32
Except what do you do when you're in your flow and your manager comes along at 1.30pm and says I need you in telephone interview at 3pm?

Are you effectively saying you should block out your calendar by work type and leave slots here and there where you find an acceptable break to your flow?