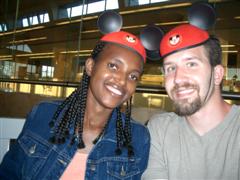 So, we went to Disneyland last week.  It was my first time.  Personally I was a little iffy about going.  I've traveled to enough third world countries (and lived with locals) to have a healthy dose of First World Guilt and I'm usually very uncomfortable in large crowds especially when there is a good deal of "excess" being bandied about.  Certainly Disneyland is a place of excess.  All that preamble said, here's a few of my thoughts as I experienced Disney for the first time as a 30-year-old adult.

There were a crapload of people.  A lot.  At $50 per head, per day, I began to wonder how folks were paying for the trip.  We saved for a few months to make it happen, and there were some church groups there with 20+ kids in tow.  That adds up.

The crowd control is minimal, mostly being handled by thoughtfully placed ropes and small barriers.  In two days we were only officially "herded" once by a couple of usher-types into the Snow White musical.

Kids were easily lost and there was an official "Lost Parents" office.  This doesn't make me feel to good about the potential for kids getting nabbed.

I was very underwhelmed by the security.  There are three places to go, Disneyland itself, Disneyland California, and a free place called Downtown Disney.  There are checkpoints when you enter the whole compound where disinterested and likely underpaid workers glance at your purse or backpack.  It actually makes me MORE uncomfortable to have lousy security than no security at all.

The first time I went through security I had to show them my insulin pump and blood sugar meter as I was carrying them in my hand.  The second time, as a test, I simply clipped the whole apparatus to my belt as a front-fanny-pack and even ASKED if they need to see it.  They said "too small" and let me pass unmolested.

They've got this new FastPass system that is meant to shorten the line length at the most popular rides.  When you buy a Disneyland ticket you're given a small cardboard credit card with a printed bar code.

At the popular rides there are three lines:

Some interesting things to me:

Additionally, when you get a FastPass (here's a clever part) you can't get another FastPass ANYWHERE for at least 60 minutes.  This foils the plan we had of running around the park collecting FastPasses up front then visiting the rides as our times came up.

This system worked great as the FastPasses would typically be in an hour or two from the present time.  We'd say, "Oh, cool, we'll do this and that and come back at four."  So, I think for the 80% solution it works - it maximizes customer satisfaction as well as the "ride saturation."  Certainly a lot of angry people waiting in line or worse, leaving a line, doesn't help anyone.  This makes sure the ride is always 100% in use.

The problem happens - just as it does with freeway onramps - when the system is VERY saturated.  We were at a ride at 2:45pm on a Saturday and the FastPass system said to come back at 8:15pm and the standby time was 205 mins.  Certainly this was the exception, not the rule, but the point was made nonetheless.

Some of the systems were clearly very simple, take Pirates of the Caribbean for example.  The animatronics were in a repeating loop and didn't vary from that loop.  Same with the New Orleans Haunted Mansion.

The systems that did synchronization between the physical and the not-physical were interesting.  In Star Tours there was an animatronic robot pilot talking to video screens with characters supposedly in remote locations.  I believe these systems (Star Tours) may have been created before the proliferation of digital media, so I wonder if they are using old style Laser Discs or 1/4" Video, or what?  And do they have a keyframing technology to make sure the tracking doesn't float as the system repeats and get off by a second or two.  None of the systems I saw ever got "off track" as I thought they might.  I'm clearly missing something around my understanding of how the control systems communicate with the media (audio, video) that support them.

Having taken mechanical physics classes, I was comfortable riding the roller coasters, but I'm always a little nervous when I feel centrifugal force that might mean my little car could shear right off the edge of the track.  Some of the older steel tracks had some spot welds that looked a bit dodgy.

While we were there, the Indiana Jones ride broke down and they had to walk everyone out of the right.  I'm not sure if the shutdown was manual or automatic.  I'd be interested in understanding if the system can detect derailments.

It was all very interesting and shiny, but our favorite ride, and the one I will remember was the one I didn't think I'd care that much for.  The Soaring Over California ride sounds boring.  They strap you into something and show you a movie shot from the air over various California landmarks.

The catch is that they actually dangle you from a chair/harness that is lifted 15+ feet into the air and pushed forward into an Imax-sized screen.  They move you forward until the dome of the screen fills your field of vision completely.  They FULLY cover 180 degrees, so no peripheral vision is there to stop the illusion.  Additionally they gently blow wind and (we think smells) at your face, accelerating and decelerating as the on-screen action changes.  the effect is staggering and I highly recommend it.  It can make you motion sick though.

It takes a lot of people to make that place work and I was impressed that they could pull it off every day, day after day.  I don't think I'll go back for a few years though.

Comment on this post [10]
Share on Twitter or Facebook or use the Permalink
August 12, 2004 17:11
When they put Star Tours in a the MGM/Diz in Fla just after it opened, I read some usenet posts from someone who worked at imagineering. Apparently the original concept was for a *20* minute ride but got trimmed down. The screen is actually a 35mm loop movie that runs around the simulator car. They had a bunch of problems getting the motion of the car connected to what was on the screen. Apparently if it is even a tiny bit off, the thing is a vomit inducing nightmare ride. Combine that with the 20 minutes and I think the imagineers who were testing this in development didn't get paid enough-- no dinner tonight hon, I tested Star Tours 4 times today; I'm going to bed!

Fred Fenimore
August 12, 2004 17:12
If you are interested in the workings of the parks, the Florida operation is much, much larger, (and the only site I've visited); they offer an add-on tour package that takes (took?) you on a tour of Magic Kingdom including a look at the security door into their park operations NOC...

There was also an article on Slashdot a couple years ago about their Japan operation's network infrastructure for things like the digital music synchronization system that lets the right music be at the right speakers at the right time for the parades to be in sync to their soundtrack... Crazy stuff, the things they do with operators in the loop to handle real world interference that would cause desync and break the illusion down...

I may not like some of their corporate decisions, but their implementations are pretty amazing.

Jon Choy
August 12, 2004 18:34
The Florida location has all kinds of cool things. We went last November and bought a doll called Pal Mickey. You can buy it or rent it. You turn him on before you enter the park and it "logs in" and welcomes you. Then as you are walking thru the park it tells you park specific facts and jokes. I beleive it uses wi-fi of some type because it seems to know were you are. They also use wi-fi for the kiosks. That way the can set up a area to sell stuff without having to plug in to accept credit cards, etc.

Richard Beyea
August 12, 2004 20:42
Speaking of Disney from a software engineers perspective...
My manager recently set a record time for visiting all of the rides at the Magic Kingdom. He did it with the help of genetic algorithm computer software (to optimize the route and use of the FastPasses).

It is a very interesting read (the print edition had a nice "Family Circus" style map of his actual route - the order of visits the software came up with would have been completely unintuitive to the naked eye). Check it out:
http://www.mickeynews.com/News/DisplayPressRelease.asp_Q_id_E_744Day

Joshua Flanagan
August 13, 2004 2:00
We purchased our tickets through AAA when we went last year. Among other perks, the AAA tickets do not have any FastPass restrictions on them. We were able to walk around the park, get FastPasses to all the rides (at the same time), then walk back around the park a second time utilizing the FastPass lines.

Rob Boek
August 13, 2004 11:41
About the synchronization...
The first animatronics simply used some kind of walkman: A simple audio tape. The left channels let's the puppet speak, the right channel is used to replay some digital information about the movement. This way, it is easy to get all synchronized.
I guess it's still the same with newer systems... Just let the videoplayback trigger all the other things with hidden digital information.

My family and I stayed at Disney World in August of 2001. Between the fast passes and the early entry. We never waited more than 15 minutes for any ride.

John Ludwig
August 15, 2004 20:43
...Or you could just skip Disneyland entirely and do Magic Mountain instead... After all, rock candy and Mr. Toad's Wild Ride can only retain their allure for so long, no?