FavIcons, Internet Zones and Projects from a Trustworthy Source

When you open a project file that was downloaded from the Internet Zone, you'll get a dialog like this from Visual Studio: 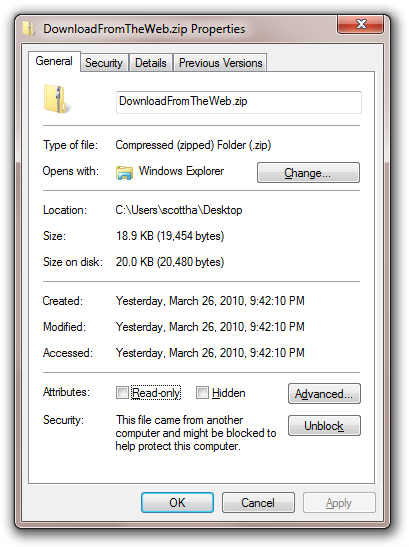 If you're wondering "how does it know?" when your browser downloads something from the net, the zone that it came from gets marked in an Alternate Data Stream within the NTFS file system.

If you use the Streams utility from SysInternals from the command-line you can see the streams on file directly. For example:

Even easier, you can right-click on the file and select properties. Notice that "Unblock" button at the bottom of the dialog. Click that, and you're declaring that you trust this file and by removing the alternate stream data you'll not get warned again.

It's not just projects that get these zone ideas, anything downloaded does, including videos, etc. These streams and zone data persist even when you move or rename files so that the system knows where things come from.

Some other programs put stuff in Alternate Data Streams, like older versions of ETrust Anti-Virus. But, after download files, the other most common use of Alternate Data streams is to store the favicon.ico of a URL file on your computer. You know those tiny icons that you see in the address bar when you surf around? Well, if you make a shortcut to a site on your desktop that .URL file will also include a small version of the favicon so you'll still be able to see it when you are offline. 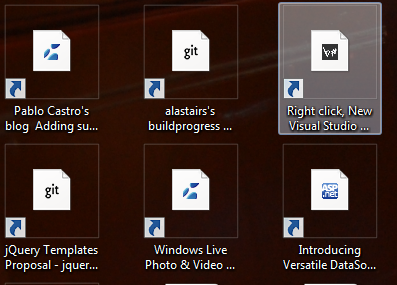 And here's some of the same files using Streams.exe from the command line:

As with all things internet, of course, be aware and be smart when you download. Don't just Unblock stuff willy-nilly like me. :)

https://www.google.com/accounts/o8/id?id=AItOawmZin4ehPJ0n1tnosy12jNNJhRgK7SXuo0
March 28, 2010 16:51
The Internet Zone identifier of a zip file gets attached to every file when you extract it. This can be a huge pain if you forget to unblock the file before you unzip. For example, Visual Studio will treat many of the files differently and Windows Help browser will not show contents. Unfortunately it is impossible to unblock more than one file at a time using Windows Explorer.

Streams.exe to the rescue! This will unblock every extracted file:

Andy Miller
March 28, 2010 22:46
Note that Alternate Data Streams (ADS) are only supported on NTFS, so files stored on other file systems (e.g. FAT) will not offer these features.

More importantly, Alternate Data Streams are not preserved when files are copied/moved over network shares (I'm unsure of whether SMB lacks support for it or if Windows just doesn't make use of it.) At any rate, if you download or move files to a network share, you will not get the download warning nor favicon features, even if you later move them back to a local NTFS drive.

Still, ADS is pretty neat when it works.

Best Registry Cleaners
March 30, 2010 16:30
The streams utility is useful if you want to remove all streams from the files. If you only want to remove the "Zone.Identifier" stream, you'll need an alternative: