I was doing tech support for a friend this weekend. He was paving an old HP Envy laptop (although this happens on some Dell Inspirons as well) and was getting a blue screen in the middle of install. Then, of course, if you're not looking at it you'll just reboot and drop back into setup and get the "the computer restarted unexpectedly or encountered an unexpected error." At this point he was in a setup loop.

"HIDCLASS.SYS" is the driver that failed. HID means Human Interface Device, and that means "keyboards or mice" for the most part. 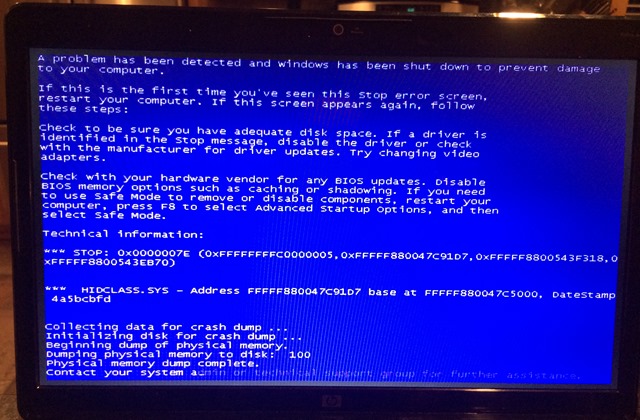 Errors in HIDCLASS.SYS, especially during setup, almost always means that there's trouble with an attached keyboard or attached mouse. I asked my buddy if he had a mouse attached and he did. He removed the mouse, and started setup over again. Setup succeeded. Then, he spent about an hour (and several reboots) getting Windows 7 "gold" (which was released in July of 2009, almost 5 years ago) up to date with patches, service pack 1, and the latest drivers. Then he was able to attach his mouse and it works fine.

Sponsor: Big thanks to Mindscape for joining us and sponsoring the blog feed this week! I discovered Raygun.io and started using it for my side project and I LOVE it. Get notified of your software’s bugs as they happen! Raygun.io has error tracking solutions for every major programming language and platform - Start a free trial in under a minute!

Had the same thing but with a USB hard drive once.

Roberto Bonini
June 08, 2014 20:44
Which once again demonstrates the need for periodic cumulative service packs, plural. Or at the very least, a post-SP1 CU.

Yuknewicz stated that is "not possible" to add the same modifications to the VB6 programming language that they have already added to VBA.

They have also announced that it is "not feasible" to open source VB6.

Yuknewicz admitted VB6 will continue to be supported by Microsoft until at least 2024.

VB6 Programming
June 09, 2014 12:09
After a lot of misleading articles I found your site and now my issue is solved. Thanks for detail information.

Mani
June 09, 2014 15:58
Great article aimed at solving a specific problem (which I've had at least 4 times in the past). As for the VB6 programming troll.. lets just ignore it.

Krystan Honour
June 12, 2014 15:47
Thanks Scott. We had a 5yo Dell Precision stuck in the installation loop that you have described. Unplugged the mouse as suggested and it finally worked! Could have bought a new server with the amount of time we wasted.

I had the same kind of problem with hidclass.sys on my wife's Asus eeePC. But there were no external keyboard or mouse connected. I have turned off USB in BIOS setup and it worked. After successful installation I have turned on USB and everything works fine.

rkk
July 22, 2014 2:07
We stumbled over here from a different page and thought
I should check things out. I like what I see so now i'm following you.
Look forward to checking out your web page yet again.

Barrington
July 25, 2014 18:53
My family members every time say that I am wasting my time here at net,
however I know I am getting experience everyday by reading thes good articles
or reviews.

Courtice
August 19, 2014 7:55
Just an FYI to say thank you. The new HP ProLiant ML310e G8 v2 intelligent provisioning installation of Server 2008 has this very issue. As the operating system is installing/configuring on first boot, it throws the 7E stop error with an HIDClass.sys message.

I suspected the wireless mouse, so I reinstalled pulling the transceiver on boot to the initial extraction of Server 2008 files. Sure enough, install went smooth.

I found this article as I was waiting to see what happened with the installation.

Mounts
August 31, 2014 1:21
Oh, the irony... My Microsoft wireless mouse was causing this. I ran the setup several times, I used both DVD and USB until, finally, I caught the error code and arrived here. Thanks, you saved the day! :)