Fixing the Touch Screen in Windows 8.1 on my old HP TouchSmart with NextWindow Drivers 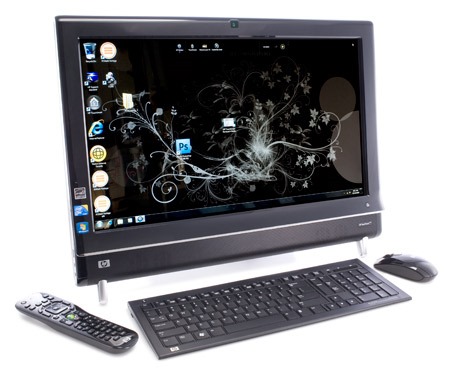 We've got an older HP TouchSmart all in one computer that we use as the "Kitchen PC." It's basically a browsing, emails, YouTube, and recipes machine. It's lovely machine, really. I've actually seen them at Goodwill, in fact, for cheap. If you can pick one up inexpensively, I recommend it.

Mine was starting to get sick so I opened it up (a challenge, but OK if you count all the screws) and replaced the Hard Drive. It comes with a 500gig 5400RPM full size SATA drive as I recall, but that was on its last legs. I happen to have a first gen 64G Intel laptop SSD around, so I use some 3M Command double-sided tape and basically taped this tiny hard drive to the inside of the thing and reinstalled Windows. This time, however, instead of the Windows Vista that it came with, I put on Windows 8.1.

You'd think I'd be asking for trouble. In fast, it's amazing. Literally everything worked, first try, with ZERO third party drivers. Blueooth, wireless, graphics, everything. Worked and worked immediately. Nothing was banged out in Device Manager. Even the touch screen worked, but only with 1 point of touch. That meant no pinch to zoom in browsers or maps. Cool, but I wanted to see if I could fix it.

These HP TouchSmarts had touch screens made by a New Zealand company called NextWindow, except they recently went out of business. Their website includes a few drivers, but not the one I needed.

I've mirrored them here because I don't trust that their website will be around long.

Here's the actual driver I needed for the TouchScreen. It doesn't appear to be available anywhere else, so I'm mirroring it here, as-is. It's the "HID Driver" (Human Interface Device) driver for the NextWindow 1900 TouchScreen. It's version 1.4 from May 24th, 2012. It works with NextWindow 2150 and 2700 touchscreens as well and it works under Windows XP, Vista, Windows 7, and now Windows 8 and 8.1!

This completely brought my HP TouchSmart new life with proper multitouch. It's paved completely with a new Windows 8.1 installation and just one third party driver and NO HP crapware.

bill
August 08, 2014 19:06
Damian, I think Scott's Goodwill store is like the storage lockers on Storage Wars - a little too good to be true. They probably salt the Goodwill store for Scott so that he gives them good press. ;-)

CarlD
August 08, 2014 23:08
Actually, Washington County has a ton of technical companies, and back in the day, had THE essential components store of the Portland area for the self-assembled PC afficionado. Target-rich environment for nerds. That might explain why Scott's local Goodwill is like five years ago Fry's.

JVime - I found it on the hard drive I swapped out. It was something I downloaded BEFORE NextWindow went out of business.

Scott Hanselman
August 09, 2014 0:30
I wish I had a Tardis as this is exactly what I needed about a month ago, its strange as it worked fine on windows 8 but 8.1 seemed to screw it up. I spent a whole day trying to find a solution to this problem only to give up a beaten man.

George Willis
August 16, 2014 5:45
Hey mate, I have a 40 inch nextwindow screen I would love to get working on windows 8.
Your link for the nwfilter.zip driver seems to not be working, could you please email me the driver or restore the link. Maybe even submit to driverguide might be an idea. Cheers, Sam

Sam
August 18, 2014 20:00
thank you very much for your information I now my touchsmart works very well with Windows 8.1. Now I need the driver of DTT

Here are a few mirrors, just for you. :)

My HP Touchsmart all in one desktop was giving problem also. The windows was getting stuck at the start. Eventually I end up replacing my 500GB hard drive.

Initially I installed Windows 8.1 which seems to be working fine except the volume button on the side of the screen plus HP Touchsmart button at the front.

I have now successfully installed original HP Touchsmart softwares and windows vista using those recovery discs. The buttons are working fine now and its all back to its original settings.

Now I was thinking to Install Windows 8.1 as an upgrade to Windows Vista. Before doing that I am not sure if thats a good idea or will it give me any problems in its performance?

Anyone have any experience about this? Your suggestion or help will be greatly appreciated.
Thank you.
Farhan