This part "大牛" as I understand, effectively means "Big Cow."

If that's not a good enough reason to go to Microsoft WebCamps, then what is? ;)

This isn't a conference, it's a camp, like a classroom. Here's the schedule.

What are Web Camps?  Web Camps are free, two-day events that allow attendees to learn and build on the Microsoft Web Platform. At camp, they will hear from Microsoft experts on the latest components of the platform, including ASP.NET Web Forms, ASP.NET MVC, jQuery, Entity Framework, IIS, Visual Studio 2010 and much more. Web Camps also provide the opportunity to get hands on with labs and get creative by building apps in teams with prizes at the end of the day.  All this with Microsoft experts on hand to guide people through.

I'll be at the boldface events. They are free, sign up now! 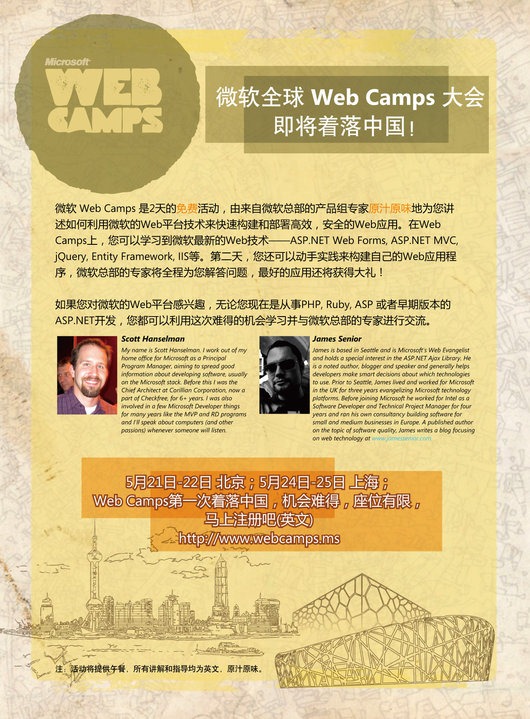 By the way, who and how decides which of the evangelists goes where?

Liang
May 03, 2010 0:49
I'm looking forward welcoming those of you going to the Toronto stop. My name is Paul Laberge, and I'm a Microsoft Web Platform Advisor for Microsoft Canada and local host for the Toronto event. I'll be at the Camp, so stop by and say hello! We are expecting some really great sessions and discussions, so make sure you bring your questions, your creativity and your laptop!

we (the hole IT-Department ;) ) are going to the camp in Munich. It's a pity you are not coming but maybe next time.

Richard Chase
May 03, 2010 15:17
You should say: This part "大牛" as I understand, literally means "Big Cow." It effectively means expert in one's field as Liang mentioned.

Some of the sessions look like beginner level stuff...

David
May 03, 2010 20:54
Are you considering any more North American tour dates? Anything in the SouthEast region?
Thanks,
Brian

great abt web camp though feel sad its not comming to bangalore .......

Filini
May 04, 2010 14:24
You shouldn't have told everyone the literal translation it might become a thing. "And now lets welcome Big Cow Scott Hanselman".

Jono
May 07, 2010 4:53
All these comments on where you aren't going, but from looking at the itinerary, looks like you'll be doing a HECK of a lot more travel than I'd want to do for work!

But, I'm sure there'll be some good times in there!

Hope you have fun in China Scott!
Good Luck.