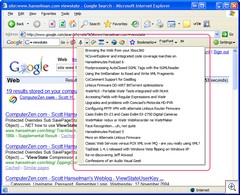 Dare isn't feeling the new Google Toolbar "T4" Beta. I'm loving it. It's brilliant that they're actually building community around a toolbar. Very cool. Their API, while Google-like in its obscurity (it's functional, and pragmatic, but pedantic) isn't hard to write to. It's all XML and URLs.

However, on the whole, the new Toolbar is a winner, and it's even more useful than before. I can't wait for a FireFox version. 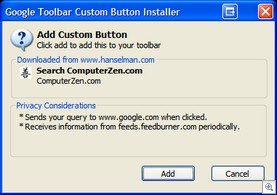 Their Button API, called the Simple API, is basically a button manifest. So, since I started blogging really so I could Google my historical-self, I made a ComputerZen button for the Google Toolbar. It took about 10 minutes.

If you've got the new Google Toolbar, you can now:

You'll not only get to my site in a single slick, you also get a specific search for my site, and a populated dropdown of ComputerZen's Feed. Shiny.

Did you doze off in that paragraph and pick up later? :)

Scott Hanselman
February 18, 2006 0:10
Interesting as I have the Google pack installed and it never told me about the update. I had to manually update to get the the button add-on. Seems kind of silly that a Google updater wouldn't know about it's own products.