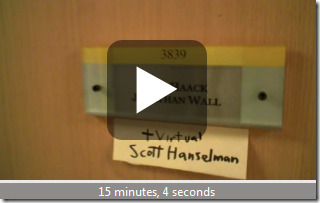 I was up in Redmond this week and stopped by to visit my Video Portal in Phil's Office. I wanted to see where I virtually sit.

While I was there, Phil gave me/us/you a tour of ASP.NET MVC 2 Preview 1.

Be sure to read ScottGu's post on ASP.NET MVC 2. The best point:

Quoting from the ASP.NET MVC Roadmap, the theme for ASP.NET MVC 2 is "Improved Productivity and Enterprise Ready."

Remember, it's a preview, so there's still time to give feedback. Blog about it, complain in the forums, or bug us on Twitter.

I hope you enjoy the video!

That is on the list for future previews. We have been playing around with a few different approaches and are trying to figure out which approach feels best.

I am really looking forward to this as it will make the code more refactor-friendly. :)

Andrei Rinea
July 31, 2009 16:24
One sucky thing with action generator is that I have some (not a lot, but more than a few) that the method parameters and routing parameters don't match at all due to model binding or action filters. I don't see how those could be done via lambdas?

http://claimid.com/eyston
August 03, 2009 11:18
Oh man... what can I say? The capability to split my project into areas, get simple server-side AND client-side validation at once (using the fabulous jQuery validation plugin none-the-less), templated Html helpers...

Ugh... makes me wish I had MVC 2 for the current project I'm building. Looks like I may have to totally rewrite it once MVC 2 is out - so much goodness. ;D

Chad
September 07, 2009 16:48
how to learn easily mvc on internet
send me answer to
anirudhakumar.gupta@gmail.com