Hanselminutes on 9 - In Norway, inside the Speaker's Room 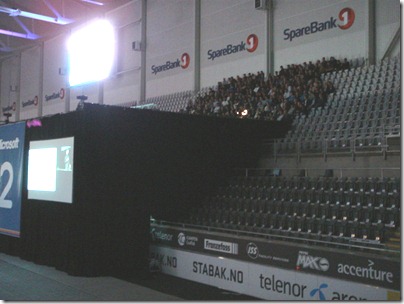 I'm in Norway, speaking at at the Norwegian Developer's Conference. It's a large conference and they've had to hold it inside an indoor soccer stadium as there aren't a lot of large convention centers in Norway.

See if you can get your head around what you're seeing in this pic. They've used curtains to build up a "room" on the bleachers of this part of the stadium. I'm inside that black box, and the people who are overflowing up the bleachers also go all the way down to the bottom. On the outside of the box is projected both a live video of me as well as my projected computer. That acts as an overflow room, and there's people sitting out there also. It's a very clever way to do it, and they've set up six different track rooms, all like this, around the stadium.

Anyway, there's a small speaker's room that we prepare our talks in. I realized that a lot of fun conversations happen in the speaker's room, and it's not fair that the attendees can't enter our "sanctuary." ;) So, I filmed some of it and posted the raw video on Channel 9 under "Hanselminutes on 9."

I captured three conversations so far. To be clear, it's raw, random and silly, but it's representative of the kind of random crap we talk about in the speaker's room. I'd also point out that one speaker just left in the middle because they couldn't get any "friggin'" work done.

Note also that these were all filmed with a Creative Vado HD portable Hi-Def video camera.

Ted Neward and "The Death of the Professional Speaker" 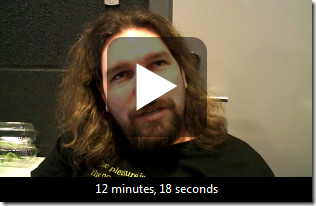 Why Aren't There More WinForms Talks with Rocky Lhotka 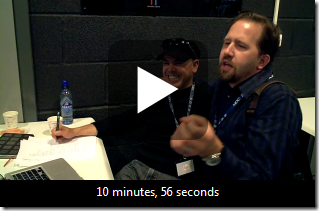 Scott Bellware and "What Is Productivity" 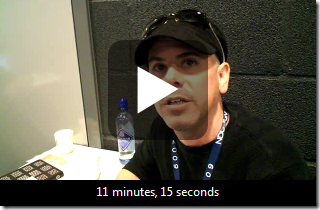 A clear example of "black box" conferencing. Aren't we European full of ideas? :)

Stefano
June 18, 2009 20:55
I love the fluidity of the productivity argument in the last video. I've always hated managers that want to measure productivity as the number of lines of code. It is also interesting to try to think about what can be done, to make the entire software development life cycle more efficient.

https://www.google.com/accounts/o8/id?id=AItOawl7kLz3wWI4juRPSUHOFp7koWjHobM-Qu4
June 19, 2009 0:39
Some managers still measure productivity in lines of code? I thought that went out of fashion years ago.

Andrew
June 19, 2009 15:09
I visited this conference Wednesday and Thursday (yesterday), and agree with you that the black-boxes solution was very clever.
Just wanted to add that each box broadcasts the audio on a separate channel, and that overflow people outside the box can borrow headsets from the information desk to listen to the audio as well. (Sometimes that was not necessary, as the sound was often loud enough to hear outside the box anyway.)

By the way, thank you for a couple of interresting talks I went to! :)