Hanselminutes Podcast 101 - Dr. Michio Kaku on the Physics of the Impossible 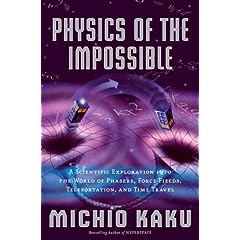 My one-hundred-and-first podcast is up. Last week I was at an internal Microsoft conference and Dr. Kaku was speaking. I reached out to him personally and was able to interview him at 6 in the morning between his keynote rehearsal and his actual talk, just before he flew back to New York. Needless to say, he's a busy guy and I really appreciated his willingness to chat with me.

Dr. Michio Kaku is a theoretical physicist, best-selling author, and popularizer of science. He's the co-founder of string field theory (a branch of string theory), and continues Einstein's search to unite the four fundamental forces of nature into one unified theory. His book tour starts March 18th and the new book ships March 11th.

In this show, Scott talks with theoretical physicist and futurist Dr. Michio Kaku about making what was once considered impossible technology into reality. This is the topic of his new book, Physics of the Impossible: A Scientific Exploration into the World of Phasers, Force Fields, Teleportation, and Time Travel.

Check out their UI Suite of controls for ASP.NET. It's very hardcore stuff. One of the things I appreciate about Telerik is their commitment to completeness. For example, they have a page about their Right-to-Left support while some vendors have zero support, or don't bother testing. They also are committed to XHTML compliance and publish their roadmap. It's nice when your controls vendor is very transparent.

ChrisL@PDX
February 22, 2008 11:06
wow, just wow.. does it make you want to give up our high level languages, and IT facade and change career into this absolute beare metal stuff?

I've always been fascinated by Astro-Physics and Quantum Mechanics; admiring them from afar as a layman. It all started for me back in high school when I discovered Carl Sagan's "Cosmos" series on Nova. I too read "Hyperspace" when it first came out. As well as several other pop-physics books like Hawking's "A Brief History In Time", and Thorne's "Black Holes & Time Warps" etc. Not to mention that old series of books from Time-Life. Remember the ones with the dark grey-blue hard covers?

I took Physics in high school and college but computers and programming took over my interests. Thanks for reminding me of my adolescent musings!

I'm curious though, what did Dr. Kaku speak about at Microsoft?

Edward J. Stembler
February 22, 2008 13:12
Edward - He spoke at our "internal TechEd" called TechReady, as he was hired (presumably) as a professional speaker, and did a speech on physics, Moore's Law, etc.

I'm loving the variety from some of the shows. Don't get me wrong, I love the technical (i.e. specifically relating to programming and computers), but this show was awesome! What Dr. Kaku spoke about regarding kids and "when you were 10" was very true for me. I've always been fascinated by theoretical physics and hearing an expert speak on these things was great. I might have to pick up his book.

Thanks again and keep up the great work!

Fabulous stuff - one of the best justifications for the continuing existence of the BBC I've seen in recent years.

Dustin Campbell
February 22, 2008 21:01
Have to chime in on that being among your best shows. It's always great when a lepton like myself can get small exposure to the beauty of theoretical physics.

David Seruyange
February 22, 2008 23:25
I like all Hanselminute broadcasts, but this one was golden. Dr. Kaku's work is fascinating, but even more fascinating is the view from inside his mind. Rather than ask just "what do you do as a theoretical physicist?" you went on to ask "what is it like to be Dr. Michio Kaku?" A fantastically perceptive interview - and at 6:00 in the morning!

Jacob
February 23, 2008 7:56
You should check out his book "Hyperspace". It's a great explanation of how other dimensions are not only possible, but countable (none of this infinite dimensions stuff) for lay-people like us.

Scott
February 23, 2008 8:09
Of course. I read Hyperspace when it came out in 1995. It's a great book and my first layman's intro to advanced physics. Highly recommended.

Scott Hanselman
February 26, 2008 23:11
Thanks for having the world's best theoretical physicist on.

Jon
February 27, 2008 8:03
I'm a fan of phyics-string theory. It fasinates me, I hope mankind is on the right track in solving the secret of nature.

Believe it or not a few of us developers are actually Ph.D.s in physics. Coding and the cosmos -- what a great combination.

Ashish
March 02, 2008 3:05
Dear colleagues. This discussion is about new physics referenced by Visual Studio start page. I am related to both of them. I've read "Introduction to superstring" by Michio Kaku, and has been developing superstring theory related software. I’ve found that math areas of superstring theory are very close to C# by their spirit. You can find my article http://www.codeproject.com/KB/cs/UniversalEnggFrmwork5.aspx about it. I do not know whether this software helps me to resolve Superstring Theory problems. But now it is not known whether Superstring Theory can describe real physics. Yet, faint heart never won fair lady. This discussion shows that I’m not alone. Maybe I’ll find other foolhardy person that is having attempts to develop software for Superstring Theory. I would like that mister Kaku to know that his book are not read only, but some inspired by his books programmers have attempted to develop software related to Superstring Theory.

Petr Ivankov
March 08, 2008 12:41
Well I just hope that the development of these supposed secrets doesn't lead to federal control and more secretive operations. It seems all of our really worthwhile technology is being used for killing humans and other species in more covert ways.

Most of these things you spoke about were already developed. The Russians placed most of their government funding into development of the more 'paranormal' aspects of life such as astral projection, remote viewing, magnetic anomolies in the earth, and we know our government accidentally found out about other dimensions with their experiments concerning electromagnetic fields and microwaves.

Anyway, that's off topic. Excellent show. I've been studying programming for roughly ten years now and I just began c# and 3D math. Then comes all the physics, chemistry and other fun stuff. This show just gives me more motivation :) Thanks.

Zafada
March 09, 2008 13:42
Dear Zafada. I've reached my desires when I've found other foolhardy person. You've mentoined chemistry. Now I am engaged by adoption of http://www.mpqc.org/ to new technologies (Multi Core, .NET). I do not know when I'll finish this work since I have a lot of another works. The main problem is that it is not easy to find foolhardy person even in case they are priced. Thanks.

Towards the end of the interview the Dr Kaku mentions about how we should kindle our kids interests in Physics and Advanced physics is so true and I can totally relate to it.

Yogesh Ramakrishnan
April 11, 2008 8:33
Holy crap you rock. I am a big fan of Michio. I always watch anything on the science channel with him in it. I've thought about trying to see if he'd wanna hang out with an "Einstein" for lunch one day since he's just up in NY.

Definitely gonna download this and listen to it on my 3.5 day train ride to the MVP summit.