I'm planning on updating the Hanselminutes.com website to look more modern and look more like this newly redesigned blog. Until then, one of the things I wanted to try was to update the application with some simpler code. The Hanselminutes podcast website is running the same VB.NET WebForms application it was on the day I started the show in January of 2006 (almost 300 episodes ago!)

Sure, the app runs fine and there's no real reason to update it, but I wanted to see how quickly I could do it and if the code felt cleaner. I'll probably do a post where I update this .NET 1.1 WebForms app to .NET 4 and show how to maintain it. In this case, I'm updating it to Razor just because it sounded like fun. No other reason.

There's a few requirements I need to make sure I don't miss:

But, it's such a basic application, it's basically a bunch of for loops. So, here's what I did tonight.

UPDATE: Check out the updates below as I was using inline SQL when there was no reason to! Very cool stuff in the Massive micro-ORM that I wasn't taking advantage of. Rob Conery has done a post as a result of my foolishness.

I started in WebMatrix, although I could have just as easily used Visual Studio. I created a new "Starter Site." I took the existing ASP.NET WebForms application's Hanselminutes.master and copy/pasted it into the new ASP.NET Web Pages _SiteLayout.cshtml.

I then added a RenderBody() call where my WebForms application's master page had a ContentPlaceholder:

I added in the existing CSS and Scripts and that got me here. A "hello world" equivalent: 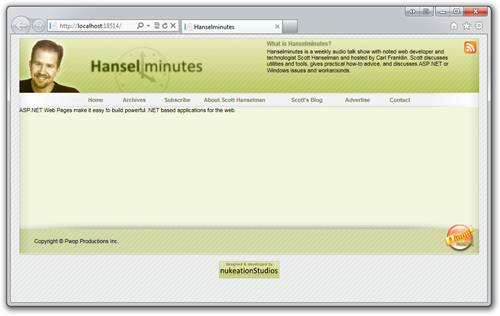 Then, I copied the Default.aspx ASP.NET WebForms code into Default.cshtml. This ASPX file has lots of server side WebForms controls like this:

But since Web Pages doesn't process any of those, they are literally ignored and sent across as if they were HTML markup. They aren't valid tags so the browser ignores them. That gets me here. More is laid out but there's no data behind it, of course. 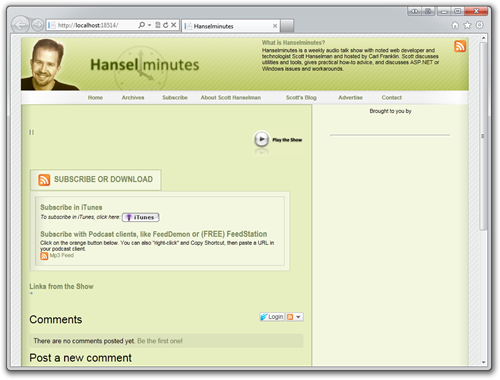 Next, I need to get to the data.

Getting at the Data

I can get at the data in a number of ways, but I like lightweight and easy so I'm using Rob Conery's "Massive" micro-orm. It's 500 lines of code, so that's nice.

UPDATE: Rob Conery pointed out that everyone thinks that Massive and micro-ORMs like it require inline SQL. That they just turn table rows into objects. Turns out I was using Massive in an OK way, but not the easiest way. Note below as I've added before and after details.

There's a good discussion of WebMatrix.Data, WebMatrix.Data.StronglyTyped, Massive, and Simple.Data over at Mikesdotnetting. They are all very similar. Use the one that makes you happy. Also look at Dapper from Sam Saffron and friends and check out my Massive vs. Dapper Podcast.

The easiest page to do first is the Archives page. It's a for loop of links, so a good place to get started.

In WebForms the archives uses a DataGrid like this:

There's some color alternating going on, hard-coded colors, kind of cheesy, and some columns for the data. It's a half-decade old. I didn't write it. But as developers we inherit old code all the time.

The Massive ORM needs a connection string in the web.config, so I'll put one there.

We've got a table called "Shows," so I need to let Massive know about it.

Next, I'll reuse the same SQL Query used in 2006, except now with Massive. I'll just see if I can get the titles first with inline SQL.

Cool, that works. But I've got inline SQL here and it's, well, inline SQL. Rob points out that Massive will let you use the Jon Skeet-designed named parameter syntax such that I can just do this and the same result as the inline SQL! I'm such a goof for forgetting this.

Ok, just to be clear, here is the whole thing again, except with smarter use of Massive.

Notice the href="" for the show is the ShowNumber, not the ShowID. It doesn't point anywhere yet, but I'll figure it out later.

Before they were doing some server side alternating color stuff. I need to update the CSS at some point, but since I'm redesigning soon, I'll just do it with jQuery on the client side, it's easier then the server-side if and gets the same result. Again, I'll change the template when I do the redesign.

Now I've got this page done, without the links hooked up. Nice and easy. 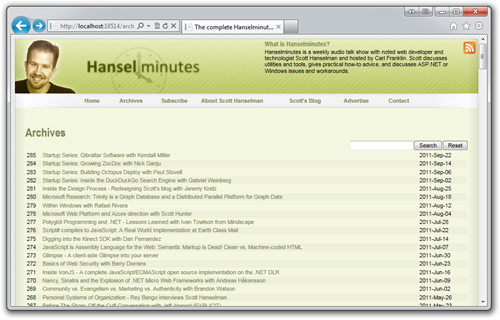 Here is the whole Archives page so far:

I can refactor the data access into a helper class and generally tidy up, but you get the idea.

On the home page I want to get the most recent show first using using inline SQL, that is, the LAST show:

And then again using Massive's syntax:

At this point, it's easy to setup the home page by just sprinkling some Razor could around the original HTML template. I'm replacing <asp:Label> and <asp:Literal> with @lastShow.ShowID and things like this. Here I'm calling an existing Stored Proc and getting the filename and location then building an HTML5 <audio> element for all the MP3s.

Then, just 20 minutes of changing a bunch of asp:Controls to @lastShow.Something syntax and I was on my way. It's not pretty, but it's identical in functionality to the existing WebForms version. 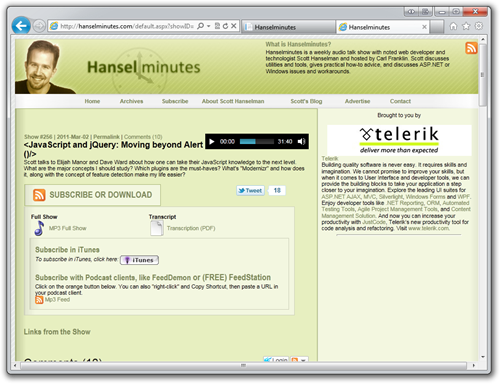 There's lots of ways to do this, but the simplest is to take advantage of the URL rewriting that's built into IIS7. While i'm in there, I'll add a total of three rules.

This rule will take /123 and rewrite (not redirect) to /?showNumber=123. Because I'm redirecting such a "greedy" URL, it's important that I used the constraint of \d+ to just get numbers.

This rule will take /default.aspx and make it /.

This rule will change things like /archives.aspx to just /archives.

But what if someone visits a link with a database ID, NOT a ShowID, like

Given a URL like this, I'll look up the show by showID, get the correct show number and then just redirect to /280 (the right number, given an old database ID of 300):

With these small changes in the web.config, plus one line of code, I'll have the same URL structure as before with 301 Permanent Redirects to the new structure that the rest of the site uses.

I'll also add one last rule to remove www. from the front of the URL which will make tweeting shows by ID nicer:

So when this is up, the current (as of this writing) show is http://hanselminutes.com/285, nice and clean.

I haven't put the new site live yet, but I'll do some more testing and do it this week. It took about two hours while watching Breaking Bad on NetFlix to convert this five page VB.NET ASP.NET WebForms application to ASP.NET Web Pages, and I'm well positioned now to make database changes as well as change the template for a redesign. More importantly, I had fun.

Comment on this post [24]
Share on Twitter or Facebook or use the Permalink
September 27, 2011 15:15
This is probably a bigger change, but wouldn't it make sense to include the title of the episode in the URL? E.g. http://hanselminutes.com/285/startup-series-gibraltar-software-with-kendall-miller/ or something similar. This might help SEO, but more importantly, the link would then give some information to the reader on what the episode contains.

I think you're going to run into trouble with with sql

If the last show to be inserted is not Enabled (not published yet?) this query won't return anything. I think you're better to filter by Enabled=1 and order desc by DatePublished and take the top 1

With regards the following query:

Would you not be better selecting the top 1 in the query. Eg:

Keep up the good work

Mike
September 27, 2011 21:25
Good idea about the URL. It would look better to, although I would still use the short one when tweeting.

Also, great point on the SQL. If there was a disabled show that was newer that WOULD be a problem. I need the LAST show that is also ENABLED.

Steve - Sure, as I point out I can easily pull that into a model class. The point is that now I'm positioned to move this into MVC if I like. Perhaps I'll also see if I can take the same application from WebForms 1.1 and move it to HTML5 and WebForms 4.x.

Scott Hanselman
September 27, 2011 21:52
Great example of a simple, yet very useful post. It shows your thought process for how you would approach this type of migration. Also easy to follow even for people unfamiliar with Razor. I gotta try out a couple of those lightweight ORM packages.

How many rows do you expect to return from this?

Morgado
September 28, 2011 21:20
I noticed you didn't mention how you would handle invalid showIDs. Sure enough, visiting http://hanselminutes.com/?showID=3000 generates a runtime error (although the detail is of course hidden).

I'm guessing you would prefer to redirect to a home page or some other 404 in this case.

Jack-N
September 29, 2011 15:02
Would be a good feature if you can pop the transcript status in the main archives index too :) At present I have to click through to check each show's status.

Jonathan
September 30, 2011 10:23
Morgado - Great point. I've changed that to a Single(). Thanks for that. An important point for folks to remember. Don't return more than you need to!

Marcel - Also a good point. I now check the single show access for a valid show and redirect home if none is found.

Jonathan - I'll do that. What should it look like?

"?showID=XXX" appears to be broken currently. Doesn't matter what number I put in there, it always redirects to the home page.

I feel the update pain also. I'm a consultant recently assigned to maintain and update (as possible) a clients .Net Web App that was built 10 years ago using 1.something. It was built by a classic asp developer who was brand new to .Net. Imagine my surprise when I looked at the Onload procedure for the first page in the app and found 3000 lines of code surrounded by one Try...Catch. That was it, all the code was in the Onload. Ouch!

I need to use the existing wacky 2004 database, it's tables and stored procedures...

It looks to me like the canonical hostname rewrite rule will remove any and all domain prefixes (i.e. not just www.mydomain.com but mobile.mydomain.com, ws.mydomain.com, etc.). But since I have not spent much hands-on time with IIS rewriting, I'm not certain of that. Can you confirm one way or the other?

Scott Hanselman
June 01, 2012 14:43
i'm a beginner in learning ASP.NET using visual basic.i hav a question,please help me with a answer for this. the question is how to hide long comments if its too long and can display it when we click read more or see more? how do we do that? plez help me...as soon as possible,will b very greatful...reply me in my email address given above...thank u sir :) hope sir will help me...

jangchu
December 01, 2012 8:57
Well the lesson here is that if you have good deepvoelrs then be very very nice to them. The skill gap is widening between good engineers and bad ones and this is mostly I believe do to the enviroment for the first few IT jobs. we have to grow and nuture our junior staff into the lead deepvoelrs of the future. I know of at least one major consultantcy that does not hire juniors at all and cherry picks the best they can find.