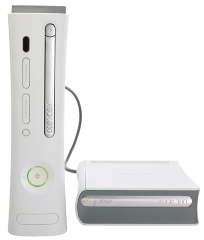 The whole HD-DVD vs. Blu-Ray thing is so ridiculous. That we didn't learn from the VHS vs. BetaMax fiasco and are doing it again just kills me. Of course, some folks think the battle is more like the DVD-Audio vs. Super Audio CD (SACD) wars (skirmish?) where neither won.

Personally, I think HD-DVD will eventually win. Not because of technical superiority (it's not) or cheapness (it's cheaper so far to buy and produce) but because of one simple thing. The name. HD-DVD says what it means. Blu-Ray? Huh? People like simple Acronyms. Also, Sony is coming off as a little snooty in this whole thing.

Anyway, enough of that nonsense, here's what's up. My Christmas gift this year was an HD-DVD Player for the Xbox360. It's US$199, but it comes with an HD-DVD copy of King Kong as well as the larger-sized XBox 360 Remote Control, which is nice. The drive also is a USB Hub adding two USB ports to make up for the one in the back it takes away from your Xbox.

Here's the worst part about HD-DVD. Once you've seen a movie you love in HD-DVD, you'll be unable to tolerate a DVD. I did a test on my wife, on 37" LCD from 10 feet away, she immediately noticed the difference between the DVD version and the HD-DVD version, and she's not one who typically noticed these things. It's like getting new glasses - You're ruined without them.

Yes, the picture is amazing, and I'm only watching it in 720p. I'd need to get a Sharp Aquos 1080p TV to get any better. But the picture is just part of it, there are subtle things like being able to access the main DVD menu without stopping the playback. There's 7.1 lossless audio. There's picture in picture multiple-video stream extras. I've got Superman Returns, Batman Begins, Serenity and King Kong and they are truly excellent in every way.

One other cool thing. You can use the HD-DVD Player on both Windows XP and Windows Vista. XP requires drivers, Vista doesn't. WinDVD8 apparently plays HD-DVD movies, a Vista doesn't support HD-DVD out of the box.

Ah, one OTHER cool thing. Apparently more and more HD-DVDs (like Superman Returns) are "combo DVD/HD-DVDs" with DVD on one side and HD-DVD on the other. That is pretty slick and if I understand correctly, unique to HD-DVD. That would make me more likely to use HD-DVD if it's true.

Comment on this post [5]
Share on Twitter or Facebook or use the Permalink
December 31, 2006 19:22
Sounds like you've got most of the "reference" titles on HD-DVD but you should also check out "World Trade Center" which is a stunning HD-DVD presentation (and a very powerful movie to boot): two HD-DVD disks with most of the extra's also being presented in HD-DVD (which is unusual).

When someone I trust (like you) is impressed with a 1080p TV and HD-DVD I'll probably pull the trigger, it hard to read between the lines of reviews by Cnet, PC Magazine etc. Sharp should send you a demo model right now; heck in my office alone six or seven of us now have a Logitech Harmony 880.

Also do you think Dolby TrueHD is any better than DTS? It is interesting to read that it supports up to 14 channels!

HDDVD v's BlueRay? IMO both will lose and within 5 years Internet distribution to set-top boxes (PS3s, xbox360s perhaps?) will be as common as DVRs are today. Imagine Netflix over broadband - perhaps we always have three rented movies on our setup boxes at any time for $20 per month?

Paul Lockwood
January 01, 2007 2:03
I just can't believe we got into this format wars all over again. There just can't be more than one mainstream format. The players won't get into most consumer's living-rooms until they know they can get *all* the movies to play and until the prices drop sub-$300 or further below.
In my little corner here Netflix weights a lot in my decision. They currently offer both formats but (my crazy guess) as soon as they get the marketing metrics compiled it makes economical sense to stick to a single format.
Maybe both formats just die and the movie industry finally accepts that this delivery mechanism belongs in the 20th century and it's time for a new system, like streaming, downloading, whatever.

Sergio Pereira
January 02, 2007 0:03
It's important to point out that the XBox360 HD-DVD drive will pretty much always force you to have Dolby Digital output.. no DTS, etc.:

The 360 player software decodes all the above codecs in software, mixes anything that needs to go together, re-encodes it into Dolby Digital and then sends that to your receiver. So, don't be alarmed when your receiver still says "Dolby Digital" even if you've selected DTS in the menus.

I've held the same expectations as you, Scott. The name alone will lift HDDVD to success, not to mention that Sony has failed formats many times before.