ear with me here. Apple Shortcuts (free on the App Store) is extraordinary and you shouldn't sleep on it. In fact, you should use it and explore it as it's amazing. I would go even further and say it could be a great place to learn to code!

Apple Shortcuts on iPhone is a lot like Microsoft Flow, except for your phone. Shortcuts let you string together Actions (ahem, functions) into multi-step tasks (ahem, functions that call functions). There's a rich and growing gallery of shortcuts that you can copy into your local (to your phone) library. You can then name them and invoke your Shortcuts with Siri.

Here's a few links to Shortcuts that (assuming you are reading this from your iPhone) you can add to your library with a click!

Once you have a shortcut you can invoke it as an item/icon on your springboard/home screen, you can have Siri run it with your voice, or invoke it via a "share sheet" that is available in all apps.

It would be reasonable to think this was a simple macro system with a few basic building blocks, but I don't think Apple's team gets enough credit. This is a complete development environment on your phone.

For example, here's a incredibly intricate and powerful Shortcut if one is pulled over by the police.

It pauses any music that may be playing, turns down your brightness and volume, turns on Do Not Disturb, and sends a message to the contact of your choosing letting them know you’re being pulled over and what your current location is. It then opens your front camera and starts a video recording so you have a video record of being pulled over.

Once you stop the recording it sends a copy of the video to a contact you specify, puts volume and brightness back to where they were, turns off Do Not Disturb, and gives you the option to send to iCloud Drive or Dropbox!

You could then record a Siri shortcut and just say "Hey Siri, I'm being pulled over" and all this happens automatically, hands free.

Take a look at the Laundry Timer app here. It's a very classic "take input and do a thing" program. You can build and extend workflows like this and the data from one flows through to the next one.

Note the Shortcut above. The "Adjust Date" action pops up a Date and is used as a Diff(erence) against the "Current Date" action, then used again in the Add New Reminder as an input to "Add New Reminder." These contextual variables flow through and are easily accessible in this genius UI. It really is near-perfect. Try it.

At this point you may be thinking, um, OK, that's cute, but where's the learn to code revolution here? It's not that open-ended of a system, what can I really do?

Like many connected cars, my car has a kind of REST API that its app uses to do things like heat up the climate system. Here I can literally POST (like Curl, but on your iPhone!) to an endpoint and pass in a FORM and parse the resulting JSON. Wow! Drink that in. You can write complex functions with iOS Shortcuts. Really. 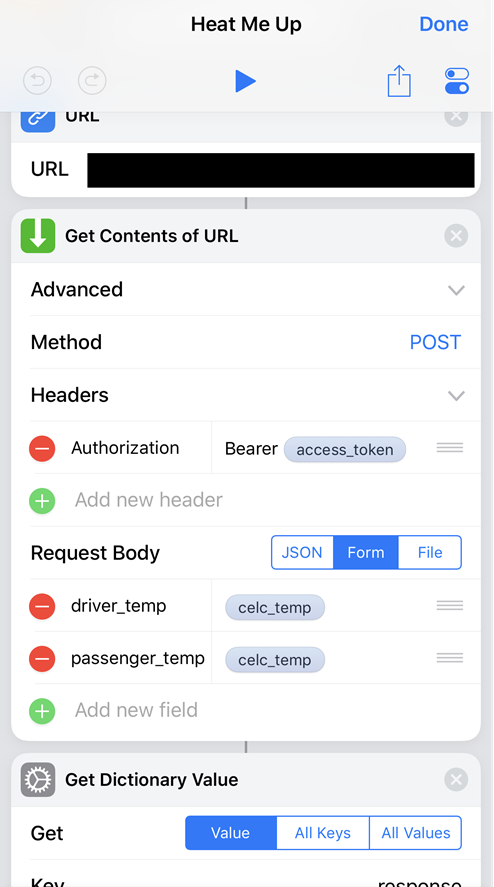 Hang on. My body has a REST API. I use the open source Nightscout project to create a REST API on top of my Diabetes Continuous Glucose Meter then surface it in places like my lighted keyboard or even my Git Prompt.

How hard would it be to - right now as I make this blog post - write a method to have Siri retrieve my blood sugar and announce it to me when I say "Siri what's my blood sugar?" Let's see!

I make a URL object with my REST API that returns my sugar as JSON, it gets passed into Get Contents of URL. That makes a Dictionary from the Input, then gets the value of "sgv" (serum glucose value) and then the result of that is used to make a string with the Text action.

Now I have Siri SAY it. I can "debug" by running the Shortcut with the play button.

Then I can Add it to Siri and record my phrase. Here's me saying "what's my blood sugar" and she's telling me. Yes, I know. I had a cookie. I deserved it.

This is just the start. It could also tell me my trend lines, text someone if it's high, make a chart, I figure can do anything! I'm going to continue to explore Shortcuts but this little NightScout one can be downloaded to YOUR phone here. You'll only need to put in YOUR own URL for your Nightscout instance.

Just a heads up, Bear has been split by the first image leave the poor B all alone at the top.

Just a heads up

Edward Douse
March 01, 2019 18:08
I tried to like shortcuts, but either I am doing something wrong, or its too "prompty" for me and didn't quite work right. When leaving work, I always open a music app, open Waze to my house, and text my wife that I am on my way. Saying "Hey Siri, I'm leaving Work," would prompt if I want to run the shortcut, then prompt for every step of the shortcut, and would read the text to me, and ask if I wanted to send it. getting 10 prompts to do this task became more annoying than just doing it myself.

-- Has this stuff changed? I really want to like shortcuts, but I cant until it only prompts once.

Chris
March 01, 2019 18:16
Not as end user friendly, but for developers you should check out Scriptable. Much more powerful if you can write javascript.

damon
March 01, 2019 19:31
Set up a fun one a few months back to hit my kids school lunch calendar provider so I can just ask or push a button vs go find it. Their system didnt have a better way. Works well!