How to enter and use Emoji on Windows 8.1

I have an iPhone 5s and every once in a while my wife and would be texting and I would send her a and she would be like "why you sending me a square?" Then later she got a Nokia 1020 and then we could send each other Emoji's back and forth 😄 😃 😀 😊 ☺ 😉 😍.

Today you can use Emoji pretty much anywhere, be it mobile or on the web with most modern browsers. Windows 8 has an on-screen keyboard that you can use to type Emoji, even if you use a regular keyboard and mouse.

Perhaps you think Emoji are silly? Did you know that Twitter actually makes sure Emoji work in all browsers by swapping them out for their own Twitter-custom images? The people LOVE them some Emoji.

Right click in the Taskbar and make sure you have the Touch Keyboard checked: 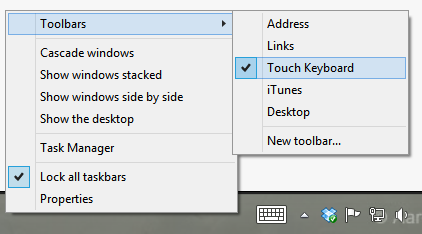 You can see it there in the Taskbar. Click it.

It's important to note the Arrows on the left there, as well as the categories on the bottom. ALL the Emoji are there.

Also noticed that Emoji are in COLOR in Internet Explorer. Here is the GetEmoji site with Chrome on the left and IE11 on the right. I've zoomed in on IE to show that the font scales. 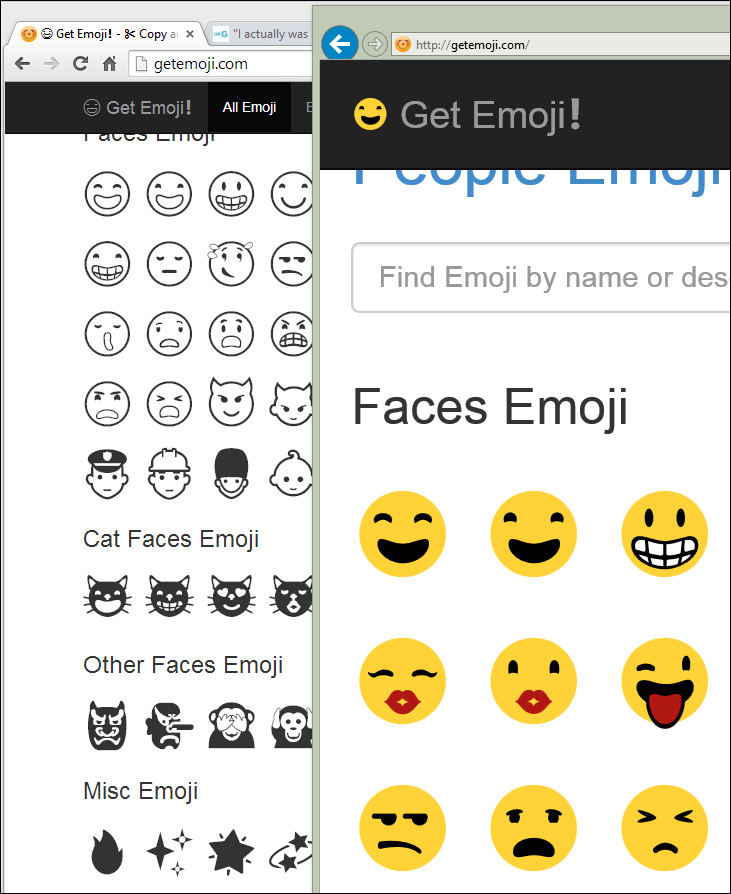 There's an amazing article by Ralf Herrmann on Color Emoji in Windows 8.1—The Future of Color Fonts? that I recommend you read immediately. I've taken part of his image below to show one of the main points of his articles. The Emoji in Windows 8.1 are inside of the Segoe UI Emoji font, and are NOT PNGs (as on other systems) which allows them to scale. Instead, they are layered and each layer has a color. So cool.

I'm going to hack around and see if I can change the color of each individual layers. "Diversified Emoji" is a big topic right now, as not everyone wants a yellow LEGO head. There's lots of quasi-Emoji chat apps on all phones with afrocentric or other kinds of emojis. I wonder if a layering system like this would be way to create infinitely diverse emoji?

NOTE: I have NO idea what I'm talking about here, just thinking out loud.

It doesn't seem like Window's built in CharMap.exe supports newer Unicode 7 (?) but BabelMap is a fantastic Extended Character Map that will let you explore all of your choices in a font like Segoe UI Emoji. 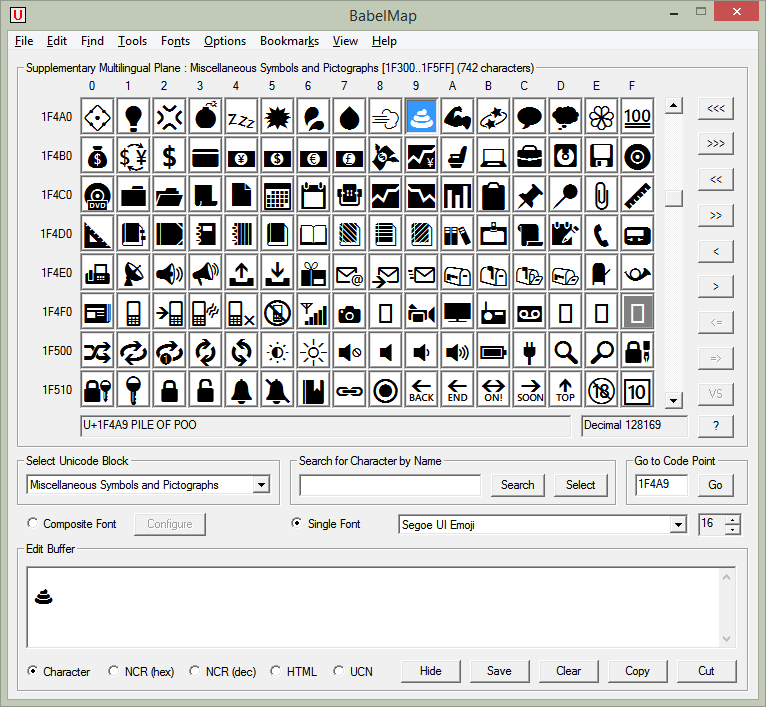 Now I need to think about how unprofessional it will be to include Emoji in all my work email. And, more importantly, if it'll all just turn into a "J" in Outlook. ;)

Michelle
July 10, 2014 2:07
@PRMan I'm on Windows 7 and see emoji. Michelle gave you one solution. I'm not sure if it was Office 2013, Visual Studio 2013, or some other component that updated the font for me (maybe the Windows Phone tooling?). It might also be your browser doesn't want to use your OS fonts and so you're only seeing boxes there though you'd see emoji elsewhere.

iMedia Designs
July 10, 2014 19:53
In the BabelMap demo, thank you for using the little pile of poop. It's the only Emoji I use to this day. It spans the full range of emotions. Good choice.

Bradley
July 10, 2014 22:05
Elle, what are you talking about? Windows has had speech recognition and dictation for years. http://windows.microsoft.com/en-us/windows/dictate-text-speech-recognition#1TC=windows-7 And you've been able to install third-party speech-to-text engines since at least the Windows 95 days.

Nick
July 11, 2014 2:03
Worth noting is that this is a fantastic way to type Emoji (with color!) into paint.net 4.0's Text tool. Everything shows up beautifully ... I wish I'd known about this earlier!

(BTW smile in this comment couldn't be used in Opera 12 either, IE and FF only...)

Andrey
July 18, 2014 11:53
It's up to software makers to allow changes to the color layers of a font. Similar to how, for instance, Adobe Illustrator lets you choose if you want to use a font's ligatures, it could let you choose between using the font's custom colors or overrule them with your own color set.

At this early stage in OpenType color fonts, I don't know of any software that does this, though. You're stuck with the colors the artist chose (unless you're willing to hack the font with something like TTX/Fonttools.)

In the realm of the web, an addition to the CSS spec is necessary to allow for color changes. An emoji (or typeface) could have a huge set of colors, so this could get messy. The base color of an emoji is yellow, but you have blue sweat drops, red tongues, orange blush, a gray mouse, a purple-and-pink guitar...

Even more complex is another implementation for color fonts, by Adobe and Mozilla. This allows for SVG to the be used in OpenType, including all SVG features like gradients, bitmaps and even animation! Image wanting to change all those variables from CSS...

I've posted an article about the four current color font proposals and their browser support for those interested.

Roel Nieskens
July 21, 2014 18:50
I had similar problems when a friend got an update on her blackberry and I was getting weird little images on my phone. I kept asking her what they were, I thought she was sending me secret code I was supposed to know! I love the idea of the layering system for emoji so that everyone could put their own unique touch to their messages.

Neale
August 24, 2014 8:40
Hello, constantly i used to check blog posts here in the early hours in the break of day, as
i like to learn more and more.

Nankervis
September 21, 2014 21:55
Helpful info. Lucky me I found your web site by
chance, and I'm surprised why this coincidence did not came about in advance!
I bookmarked it.