I had a hard drive die recently so I decided to do a full fresh reinstall of Windows, this time a fresh Windows 11 from a downloaded ISO burned to a USB stick. 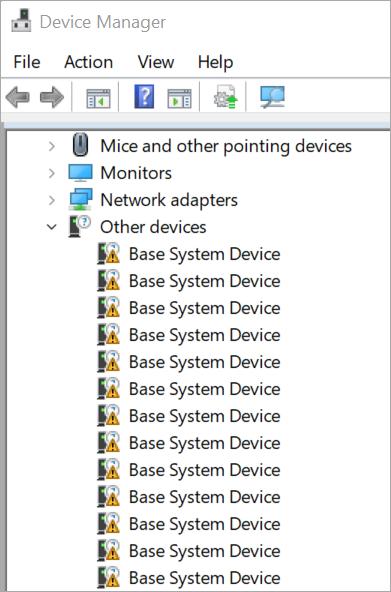 It was a solid install and everything worked out of the box. I used it for a few days and had no issues, but while poking around I noticed in the Device Manager that there were dozens of Base System Devices that were banged out. Like a TON.

I'd like to get that fixed, so I went to Windows Update but WU said everything was cool.

Since a lot of stuff moved and was redesigned in Windows 11 I went looking for "Windows Update Optional Updates" and it took me a while to find it, even though it's listed right there on Windows Update in Settings.

Click on Advanced Options. Here you can control things like your Windows Update active hours so it doesn't reboot when you don't want it, etc.

Here you'll see a bunch of Optional Updates. I had like 33 of them.

Here's what it looks like when you have a bunch of updates pending. These are Chipset and Motherboard updates.

I did have to select each of these checkboxes and select Install at the end, but once they were done, I had no banged out (yellow exclamation point) devices in Device Manager.

Sponsor: Lob APIs ensure your addresses are deliverable and everything you send arrives at the right place. Add address autocompletion and verification in minutes using React, Vue or Javascript - Try for free!

Comment on this post [3]
Share on Twitter or Facebook or use the Permalink
October 31, 2021 3:56
Are these updates for only devices I have?
I seem to recall that back in the day, optional updates was the place where you found drivers that Microsoft felt had issues and as such were only for advanced users to try.
I once saw suggestions for updates that were drives for devices I did not even have like printers.

James
October 31, 2021 13:56
I'm a bit surprised, did you never install any drivers from vendors when installing a fresh OS?
Or did I miss something in the last years? (since Win10?)

Ralph
November 04, 2021 16:42
I've always been worried about installing those optional updates because they are from 2018, 2017, and older. Are they really the latest/newest/correct driver on my new system?