How To Sync your Apple Newton MessagePad with Outlook 2007 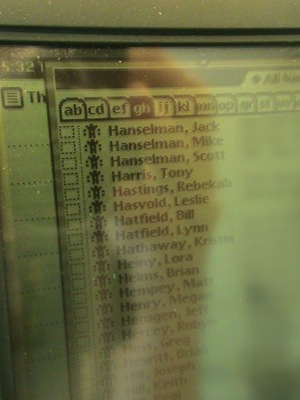 I bought a Newton recently, rather than an iPhone. I bought it from Jonathan Wise (Here's a Wired article with Jonathan and our Newton).

The picture at right is my Newton MessagePad 2000 just after syncing with Outlook 2007. Yay! A few thousand contacts and a three hour long initial (overnight via serial) sync, and I'm in business.

The Newton came out in May of 1992. That evening, while working at Incredible Universe (a computer store) on the side (mostly for the hardware discount) I sold Don Box his Newton. Fast forward 15 years and I'm still Loving the Newton. Not sure where Don's Newton is.

I picked up this Newton on a lark, and in the process stumbled on a fanatic active online community. There is still new development happening on this decade-dead platform.

NEWTON NEWS: Literally this week a completely new product was released called Newton Connection Tools (download) out of Argentina. Unfortunately the demo is completely crippled and the author wants a Western Union money order for $45. While I think the screenshots look great and I wish the authors well, in this Web 2.0 world, you really need to take Paypal and offer a more compelling demo version.

The Newton arrived dead/fresh/reset. I turned it on and it had nothing installed. It shipped in its original packaging with all the original disks. Those disks were 3.5" floppies though and I haven't got a machine with a floppy drive anywhere in the house.

The Goal: Newton programs are "packages" with a *.pkg extension. You need to install them via a Package Manager of some kind, usually the Newton Connection Utilities. You run the Dock application from the Extras folder on your Newton and run the NCU and the Newton is connected.

For advanced Newton users the goal is to get their Newton network-enabled with a wireless or wired PCCard, then they'll rarely need to use the Serial Mechanism again. This is an advanced technique I'll post about later (when I get the wireless card.) For now, connecting via serial is fine with me.

Step 1: I run Windows Vista, and there's a number of ways you can try to connect your Newton to your Windows machine. The connection is serial, usually limited to 38400bps but there is a hack that will take it up to 57600bps. While the Newton Connection Utilities run fine on Vista, there are serious timing problems with faster machines. Remember that the NCU was written in a Windows 95 era when machines were ~200 MHz. Now that they are 2 to 3 GHz, things get tricky. Some people have had success using a program called slowdown.exe (or running many copies) to get the computer slow enough to successfully connect their Newton, but I think that's just silly. Others have had success by turning off Serial Port FIFO buffers.

Note: If you're missing a cable, you can build your own.

Neither of these worked for me, so I decided on a strategy that was guaranteed. I used Virtual PC (free download) and installed Windows 98. I found a CD with a copy of Windows CD, and you should too. Windows 95 or Windows Me will do fine as well. Surely you have one of these lying around.

Be sure to sent the Network Adapter in Virtual PC to "NAT" instead of "Bridged" so you avoid exposing your freshly installed (unpatched/unfirewalled) Windows 98 machine to the harsh environment of 2007's Internet. 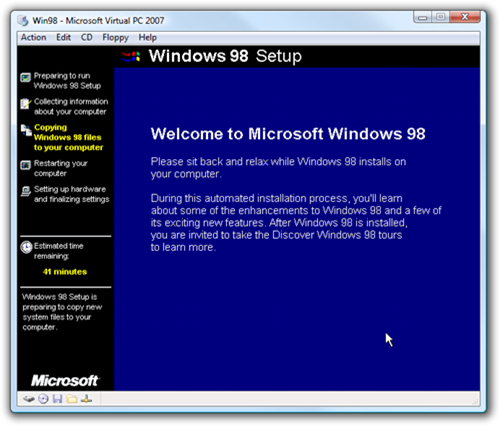 Step 1b: As soon as you have a working Windows 98 VM, make sure you select CD | Install Virtual Machine Additions and auto-install all the Virtual PC Drivers. Not only will it relax your Virtual CPU (Win98 ran CPUs hot, even in idle time) but it'll enable the most important feature - Drag and Drop between Explorer and Virtual PC.

Step 2: Go get the Newton Connection Utilities for your computer. Get some Newton Software. Start at the motherland, the United Network of Newton Archives. I used uTorrent and grabbed the entire multi-gig archive of shareware and freeware via Torrent. Leave your torrent program running for a few days after it's completely downloaded the archive so that others can enjoy.

There's also a great Wiki resource at WikiWikiNewt, so check that out. There's also a software archive of Newton stuff at Chuma as well as an old, but valuable Newton FAQ.

Drag and drop the NCU (the installer for the connection utilities) on to your running Windows 98 Virtual PC and install and run it. While it is running, connect your Newton to the serial port, ensuring that the virtual serial port is associated with the physical serial port. Run the Dock application on your Newton. You'll know you've succeeded when the buttons in the Newton Connection Utilities application "light up" and the name of your Newton appears in the Communication Status portion of the screen. 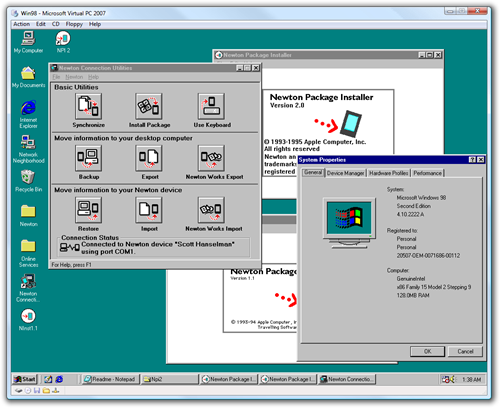 Step 3: Now you should be able to install packages into your Newton. Head over to Newton Does It and get LookOut! and the LookOut Shareware Nag Remover (the company disappeared 10 years ago):

Open the Lookout Hack Zip file and read the read me. Rename the LookOutB.pkg to LookOut.pkg and drag it into the Virtual PC. On your Newton, click "Install Package" in the Dock Application, and select the LookOut.pkg from your Desktop, usually C:\windows\desktop on a Windows 98 machine.

Once it's installed on the Newton, open the Extras folder and run LookOut!

Install the LookOut on your Windows Host - not in the Virtual Machine. I installed it on my Vista machine.

Shutdown your Virtual Machine and Save its State so it will release the physical serial port we've been using, then run LookOut on your host. Start the sync and you'll get a warning from Outlook that someone's trying to access your data.

LookOut will sync Tasks, Contacts and Calendars. I just chose Contacts. It sync'ed overnight, taking maybe 3 hours, but I have over 2000 contacts, so YMMV.

Conclusion: I have high hopes for the newly released Newton Connection Utilities, but until he accepts PayPal and includes a time-limited demo or something to prove it works, I'll stick with this free technique.

Just so you know, Paypal isn't available all over the world. I'm not saying this is the issue with Argentina, but it sure is an issue here in South Africa. I can pay people with paypal, but I cannot receive _any_ money using it. They simply don't allow it for me. So it's more like Web 2.0 (pre-alpha) world for some of us ;)

I really thought it was just a little running joke of yours... sure there was that photo.... but anyone can produce a photo....

what's next? a phonograph for playing your wax musical cylinders? a babbage difference engine for comptrollorating your feudal tithe?

Scary, scary stuff!! We pray for you.

lb
July 28, 2007 16:42
Ha! Record time, Scott. Way to get the Newt in gear!
And to all you naysayers, Newton rules -- definitely shot down before its time. I found it most useful for note taking in meeting -- plus I could doodle whenever I wanted, and it always drew attention...