KB 810886 The network BIOS command limit has been reached - Why Does All the Crazy Crap Happen to Me? 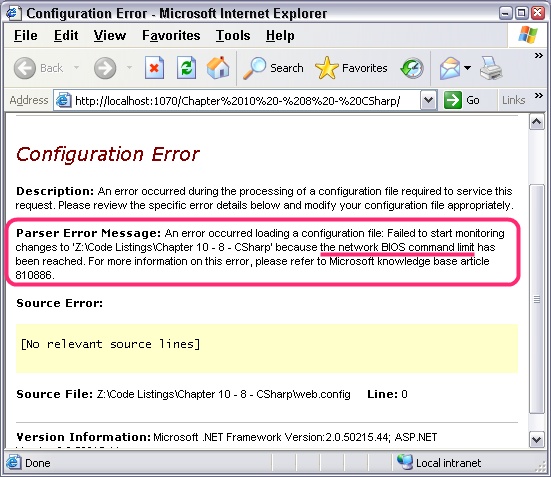 Why is it all the crazy stuff happens to me? I mean SERIOUSLY crazy.

I am running a VirtualPC with Visual Studio Beta 2 inside it, and I like to keep my code out of the VM and safe on my system. So, I usually share a folder using the Virtual PC built in sharing.

However, for some reason, BETA 2 doesn't like it like BETA 1 did and I get "Failed to Monitor Directory Changes."

I did give this drive (my Z: Drive) full trust, though:

This way .NET won't freak out that I'm running and debugging off a non-attached drive.

But, it still wasn't feeling it, so I disconnected the VirtualPC Drive and did a straight Mapped Drive/Network Share from my VirtualPC to my Host OS. After a few builds within BETA 2 I received this charmer from the Yellow Screen of Death:

WTF?! Um. Ok. Believe me, I couldn't have been more shocked if the thing had told me that my CMOS Battery was dead and that I should run SpinRite to reformat my MFM hard drive. Sheesh. Do I need to load freaking QEMM into the UMB to get this thing to work? EMM386.EXE anyone? Can I get a TSR please? Is Trumpet Winsock installed?

Ah, how comforting that there are exactly TWO instances of this on Google, THEY ARE THE SAME SITE, and more interestingly, that I shall be #3.

Google Groups you say? The USENET? Of course. Um, NO. Exactly ONE message from two months ago and that guy received the standard flame - "Why would you want to do that?" (actually he was a little lower level, actually programatically setting up file change notifications within his own app to fiels located on network shares. But still.)

So, I'm told to check out, yes, wait for it, wait for it, the LanManager Workstation and Server keys in the Registry's HKLM/System/CurrentControlSet/yadayadayada.

Coming Soon, Longhorn from the makers of LanMan and EDLIN!

But I'm not bitter.

Long story short, I shall be doing my BETA 2 dev locally.

NOTE OF SANITY: Before you freak out also, rememeber, this is using the new Cassini-style local web server, NOT IIS. Basically the local web server assumes its, well, local. So, it sets up some local file watchers that are a bit too chatty for the SMB Network Protocol. Yes, I tried upping the Registry Key values from the KB. No, it didn't work.

Comment on this post [4]
Share on Twitter or Facebook or use the Permalink
April 22, 2005 17:31
Yeah, you and me both. I've been told that if I ever want to shut down Microsoft for good I should apply as a Windows tester. Nothing would ever pass me.

I ran into a situation the other day where I had to write a batch file to process some SQL scripts. I think it'd been about 15 years since my last batch file. I've maanged to use NAnt and avoid the batch world. Yesterday I almost had to use the subst command to map a drive. Cue the cries of "Backwards compatibility is king!".

Ian
May 09, 2005 9:15
Had the same problem and upping the values to 50 (or adding them, as neither my registry on my web server nor my XP workstation had either of these keys in the places indicated in the KB article) didn't work for me either.

I finally fixed it by upping the values of the specified registry keys from the suggested 50 to 100. Using perfmon and monitoring the redirector's number of commands, you can see how it climbs after opening VS.NET 2005 and then building a solution, for example. And it stays high after that. In fact 100 may not be enough eventually if the project gets large enough based on my monitoring.

Scott W
November 17, 2005 15:56
I have been struggling with this issue for many hours now. Using VS2005 and got the code on a network share. First had to come over some AspNetHostingPermission, and when finally succeeded in that: this!

Nothing (well, except this) is to be found on the internet, and it makes me wonder why VS or the OS not just proper closes the commands...

I can imagine building from a network share is not an that odd or exclusive situation in small software companies, so why don't others ran into this problem?