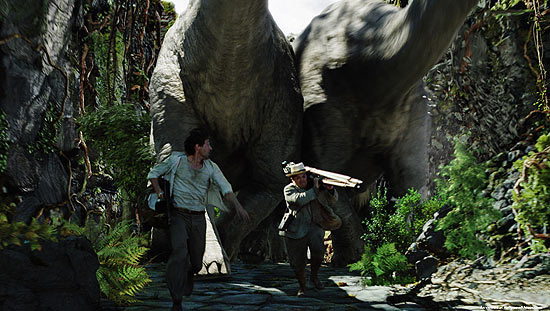 We rented King Kong today, the 2005 version. I'm sitting here watching this and I just had to pause and take a moment to blog.

Folks have been saying that the dinosaur chase scene is amazing. Here's one:

The dinosaur chase scenes put Jurassic Park to shame. Halfway through the movie I commented to my friends that I thought this movie was redefining movies altogether.

I'll just say this one gets 5 stars and I'll definitely get the extended edition of this just so I can watch the dinosaur chase scene again and again.

Maybe I'm jaded, or have a sharp eye from working with graphics, but I'm been VERY disappointed with the lack of attention to detail in movie special effects over the last 4 or 5 years, while critics and the media heap on praise. What am I missing?

This chase scene looked like the actors were running on a treadmill and later pasted on the screen like paper dolls. It's clear an attempt was made to reconcile shadows and light sources, but several times shadows hit one character on entirely differnet sides than another. In one segment Jack Black slides down the side of a Brontosaur and hardly looks to be making contact. The little stow away runs along the edge of the cliff leaping over rocks that should be in his same position on the z-axis but are in totally different focus making the whole depth of field feel strange.

(In all the new Star Wars movies, tell me there were moments when it was clear the actors feet were never touching the computized ground. You think they'd at least let them leave footprints or something on Tatooine.)

End of rant. I guess it's just me and this is my secret shame.

I am wrong to thing that special effects are getting a little lazy? It's been 10 years since Jurassic Park and other than some fur effects (yawn) I'm not seeing what bars have been raised in the last decade (other than ticket prices).

Did you see King Kong? What did you think?

Comment on this post [15]
Share on Twitter or Facebook or use the Permalink
April 02, 2006 17:49
I totally agree with you. "Kong" was one of the most over-hyped, disappointing films I saw last year, but even putting that judgement aside the dinosaur chase scene was very poor blue screen work. Jackson always runs out of time with his movies (he spent more on the reshoots for each of the LOTR films than most have to produce whole movies) and always comes in way over budget, but the results usually justify the cost and usually he manages to pull a rabbit out of the hat right on the deadline. In the case of "Kong" it's obvious that they just ran out of time and that dinosaur chase scene was the one that suffered the most (together with great plot holes caused by trying to get the movie down to its ridiculously overlong running time from its more than four hour start)

Ian Smith
April 02, 2006 21:11
I would have to agree with your assessment off the special effects work over the past few years. It seems that they have concetnrated alot on creating fake environments and have not concentrated so much on blending it well with live action. It seems that the blur effect has replaced everything else. One great exception was I-Robot, which has pretty cool effects that blend well. But 90% of that movie is CG. Maybe they should jsut CG the actors as well (then you get Star Wars which means they're definitely not there yet).
Look at a movie like Independence Day. Back in '94 they had to use models in conjunction with CG which makes it look so much more realistic.

Anywhoo. Good rant. It sucks to have to pay $$$ over and over again and get absolutely nothing but a feeling that you've seen that before or that it looked fake. I know it's the movies, but still!!!

Alexey Kouzmitch
April 03, 2006 0:44
This is one of those scenes that should have been a deleted scene. The pacing was all wrong and the special effects where spotty. Overall however I liked the film.

Brook
April 03, 2006 6:46
I watched almost the entire movie in fast forward (the slightly sped up FF that still includes audio) because it got so boring. Man, that director needs to learn the value of a good editor.
Oh, and you're right, the effects were bad. I kept thinking to myself that the 70's version (that Jackson apparently sneers at) seemed more realistic (but that could be just how I remember it).

Joshua Flanagan
April 03, 2006 16:55
The movie started interesting but then got too boring and awfully long. When they get to the island things start to get just silly and childish. I didn't like it, but I'm not known for liking too much special effects anyway.

Ryan Roberts
April 03, 2006 20:47
I stopped watching after 2 and half hours. I had to find the energy the entire next day to sit through the last 30 minutes. Special effect can not make up for an ego with an over produced movie. But yes most special effects seemed off.

in terms of special effects; the character and environment effects on their own were pretty stunning- i thought kong was very well done, as were the hero shots of the dinosaurs; similarly, i thought the environmental shots of NYC, the sea, and the jungle were pretty impressive.

i agree that the dino chase scene was dissapointing, on many levels. it was clearly the "pod race" scene of kong... way too long, distracting from the main plot, and pretty outlandish. It just didn't do anything; especially compared, for example, to the "bugs" scene... which did a good job of conveying helplessness/despair/etc through excellent lighting, contrast, sound, dialog, camera moves, alternating tight/long shots, etc.

The 3D CGI effects for the bronto's and the raptors were somewhat well done (a bit cartoony), but very, very poorly composited; i'm thinking that a "B" team was responsible for the poor results... its possible that this entire scene was outsourced to some 3rd party shop as a last minute rush effort. in some ways, the entire scene reminded me of the original- it seemed campy, low budget, and gimmicky.

chris hollander
April 04, 2006 3:20
I actually thought that scene was not so great. What impressed me was the scene with the two Tyrannosaurs caught in the vines hanging in that gully, swinging back and forth. Now, THAT was something we hadn't seen before.

It was a tad overlong (ahem) and a few scenes were overkill (the little valley of the nasty bugs), but I really loved it. Ultimately it's an exceptionally noble story, and quite relevant, I think. I cried and cried and cried at the end. The moral of the story, from my perspective, is that regardless of the many different kinds of ferocious and dangerous animals in the world, truly the only ones that can be called "monsters" are men. Animals kill to survive; we kill for pleasure and profit.

Andy
April 04, 2006 7:32
Whilst the dinosaur chase scene was tedious, it has nothing on the "Attack of the Killer Bugs" scene. Now that was unnecessary, pointless and completely popped the "suspension of disbelief" bubble.

Strange Pants
April 04, 2006 17:37
I also was fairly appauled at the "paper doll" quality of many of the special effects in Kong. Its so noticable I'm not 100% percent sure it wasn't done to mimic the blue screen effects/claymation from the B+W original.

Ken Kolano
April 05, 2006 12:30
I have to agree that Kong contains some of the worst blue-screening that I have ever seen.

Other people that I have mentioned this to however, commented on how 'apparently' it was because of the desire to give the film a bit of a retro feel.

I find myself looking towards this explanation, because I am unwilling to accept that anyone could think that these scene looked realistic in any way.

Havea look what I said back when it was out at the flicks http://www.nakedcleaner.com/index.php/2005/12/22/king-pong/

Ashleigh
April 07, 2006 22:05
I thought the CGI was pretty good in Kong, but the compositing was horrible. Anytime a real actor had to interact in front of CGI, it was obvious.

Jeff Martin
April 28, 2006 2:31
At last glad to commune with other king kong ranters. This movie really lowered the bar several notches. The special effects were shoddy and in fact very abruptly done leaving me dangling with the story line while they were playing.

That particular scene you are talking about was ultimate lesson on how not to overdo special effects.

Keep it simple and real. We are not in the 80s or in the 90s when you can bedazzle the audience just by making showing us giant dinasaur or panning the camera over the cliff expecting us to go ooohh aaahhhh.
We want to be immersed in the special effects with both our brains and hearts.

Today you not only have to get your depth, light sources correct and dinasaur expressions right but they all have to be intelligently woven with the humans correctly.

To me this movie was bit B grade and the special effects unduly exaggerated.