Tons of great announcements this week at the BUILD conference. I'll slowly blog my take on some of the cooler features, but for now here's a rollup of the major blog posts for developers:

You can download and get started with .NET Core 2.0 Preview 1 right now, on Windows, Linux and macOS:

If you already have .NET Core on your machine, you'll already be able to type "dotnet --version" at the terminal or command line. Go ahead and try it now. Mine says:

Remember on Windows you can check out c:\program files\dotnet\sdk and see all the SDK versions you have installed: 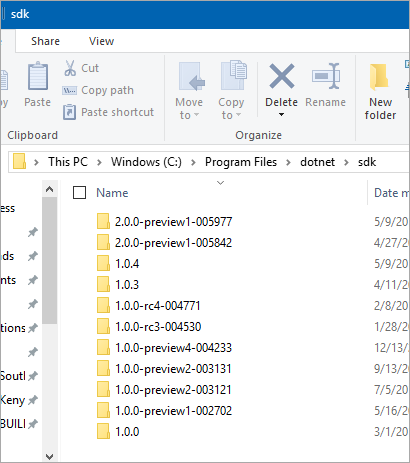 Typing dotnet will pick the most recent one...but it's smarter than that. Remember that you can set the current SDK version with a global.json file. Global.json's presence will override from the folder its in, all the way down.

If I make a folder on my desktop and put this global.json in it:

It will force my dotnet runner to use the .NET Core SDK version I asked for. That "projects" line isn't needed for the versioning, but it's nice to be able to select what folders have projects inside.

At this point - with a valid global.json - making a new project with dotnet new will make an app with a netcoreapp1.x version. If I move elsewhere and dotnet new I'll get a netcoreapp2.0. In this example, it's the pretense of that global.json that "pins" my SDK version.

Alternatively, I could keep the dotnet.exe 2.0 SDK and install 1.x templates. This would mean I could create whatever I want AND pass in the version.

First I'll add the 1.x templates into my 2.0 SDK. This just needs to happen once.

Now, even though I'm "driving" things with a .NET Core 2.0 SDK, I can pass in --framework to control the project that gets created!

I can make libraries that target .NET Standard like this, passing in 2.0 or 1.6, or whatever netstandard I need.

There's two options that are not exactly opposites, but they'll give you different levels of control, depending on your needs.

From my understanding this is:
- The full framework.
- Modularised framework, not all of full framework is included.
- The standard definition of .NET, versions for other OS can target this.

Peter
May 12, 2017 17:58
@Peter. That is pretty much correct. .NET Standard defines specifications to be implemented (think interface). .NET Framework and .NET Core are implementations themselves (think class implementing an interface). Like any interface/class combination, the implementing classes can implement the interface and additionally add additional functionality. .NET Core's benefit is that it has implementations for multiple platforms. .NET Framework's benefit is it's additional functionality (WPF, WebForms, etc). But that extra functionality comes at a cost, Windows OS only.

Ed
May 14, 2017 23:49
More convenient to use imo is the official Docker image https://www.microsoft.com/net/core#dockercmd . Keeping your installations "preview-free" ;)

.NET Framework is the traditional flavor of .NET distributed with Windows. Use this for desktop Windows app or with ASP.NET 4.5/4.6.

TalkingDotnet
May 24, 2017 14:34
Hi Scott,
I have been using git push azure to deploy to my teams code and this has been working until a couple of weeks back when v2 was announced, I have added a global.json to the root of the project specifying sdk 1.0.2 but it does not seem to have an effect, I have the following error: