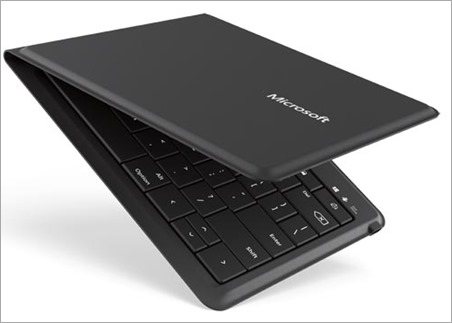 I have a Surface Pro 3, an iPad 2, and an iPhone 6+. I also have a few Android devices for development. Sometimes I'm on a plane and want to do email, or I'm playing a game on my iPad and I've got my iPhone off to the side. You know, various combinations like you do.

For a while I used the Microsoft Universal Mobile Keyboard. (To be clear, NOT the Foldable one...that will show up in a moment) It's universally well-reviewed and with discounts can be found as low as US$58. One of the big pros of the Universal Mobile Keyboard is that the cover separates via magnets from the keyboard and includes a notch to hold your tablet up at an angle.

However, for me it had a few nits. It's about 75% of full-size which is just a little "off" for larger hands. It's also quite large. You can't really put it in an inside jacket pocket, it's definitely a backpack item. It's great, but it's not perfect...so, I tried the:

Fast forward a year and the Microsoft Universal Foldable Keyboard is out. I preordered it as soon as I saw it in April. I swear if I had a dozen of these in my backpack I could sell them in a day of just sitting in a cafe. Folks always ask about it. It's lighter than most mobile keyboards, the folding is cool, the battery life is months (they say...I've never charged it yet, but it charges with micro-USB so that's trivial), and it supports basically any device.

I was at OSCON using the keyboard and the two things I consistently heard were:

Seriously, Microsoft needs to do more than just word-of-mouth to advertise cool stuff like this. I realize I'm gushing, but I like the keyboard.

Here's the details. It's about 6 inches by 5 inches. Pictured below next to my Arc Touch Bluetooth Mouse (which also rocks) for size comparison.

It unfolds, of course, and it's deceptively thin. Here it is pictured next to my Surface Pro 3 keyboard. The material and keys are basically the same. Surprisingly the fold in the middle looks a lot more dramatic than it feels in practice. Notice that the T and N and G and H are wider than they should be? That subtle but significant change makes touch typing very easy, in fact.

The keys are advertised as "full-sized" but you can see in the pic they are likely about 90-95% of full size. So "darn near full-sized" would be a fair statement. They aren't significantly smaller than my Surface that they slowed me down, but it's worth pointing out.

The killer feature - besides the folding - is that you can pair two devices to it at the same time and switch between them. See the [1] and [2] buttons there? You long-press to switch devices. You can be typing on your Surface or Tablet, then get a text message on your phone, then just long press to reply to it then long press to return to the main device. The keyboard also has an OS button in the upper right corner to manage keyboard mappings, and it remembers them for each paired device.

For example, the Escape Key on iOS is also Home, or a double-press is the iOS task switcher. The Home button is home or the Windows Key depending on your device. There's also a CMD key for Macs as well as the usual Alt/Option key.

A only real con of this keyboard is that it does need a flat surface to sit on. It won't work well on your lap. Also, I haven't figured out how to force the FN key to reverse the functionality so there is no easy way to do things like ALT-F4. The default functionality for the top row is for more "Consumer" things like muting the volume and such, not for coders and hotkeys. For many folks that will be a deal-breaker, but for blog posts, emails, and surfing around, it's fine for me. I'm not going to code for hours on it.

I also did an unboxing video the day I got it in the mail, filmed with a potato, so check it out and subscribe to my YouTube.

* My Amazon Affiliate Links buy me tacos and gadgets like these to review. Please use them!

Sponsor: Big thanks to Infragistics for sponsoring the feed this week! Responsive web design on any browser, any platform and any device with Infragistics jQuery/HTML5 Controls.  Get super-charged performance with the world’s fastest HTML5 Grid - Download for free now!

Some Microsoft keyboards let you press Fn+CapsLock to lock/reverse the FN key. I know this works on the Surface Touch keyboards, and on the MS All-in-One Media Keyboard. Have you tried Fn+CapsLock on the MS Universal Foldable Keyboard ?

Les
August 10, 2015 5:28
IMHO, without functional keys it's worthless as keyboard for anything

You'll see what I mean.

Taki
August 10, 2015 13:46
Still rockin' the Palm wireless keyboard! The box says only Palm devices, but it's a generic bluetooth keyboard. I know it works on Windows and Android -- haven't tried Apple yet. A bit smaller than the Microsoft one (6"x4") when closed; still 95% full-size keys. I'm not on the go as much, so the 2xAAA batteries usually last me well over a year. Two things that it has that Microsoft could copy to raise their keyboard's usefulness: The slide lock (can use it on my lap when open and locked!) and built-in phone stand (tilts the phone up so you can see it while typing).

Thanks for the review, Scott! Now I know what to look for when my Palm wireless keyboard *eventually* breaks. That is, unless I run across another one at a garage sale ;-)

Jacob - It doesn't seem to. I'll email the team.

Scott Hanselman
August 10, 2015 19:54
Thanks for another nice review and for tormenting us UK buyers with some more cool tech.

chris hollander
August 15, 2015 3:31
mate I wanna to add something here. If you're looking for vpn comparison site you must visit this link here. It is also provider country basis service.

Joseph
August 27, 2015 22:32
Scott, that looks like a nice keyboard. I wouldn't want to use it as my primary input device, but certainly it has it's place.

I feel compelled to share my opinion on a phrase you used: "the killer feature". I admit, my eyes rolled as I read it. Ever since the media went completely overboard and beat the horse dead with "iPhone-killer" it seems that the media and bloggers still love to over-use the term "killer". Can we throw that term away into the deep dark dungeon alongside the much overused "-gate" suffix? If something really was to be a "killer" wouldn't it have to do something that is both special, unexpected, and unique in the market?

There are other keyboards that have these features -- and some do it even better. The Logitech K811, for example, supports three different devices, allows for hot-swapping between them, and is even back-lit.

At the end of the day, it's not a big deal -- just my personal opinion. I simply find it interesting that your article about a keyboard made me think more about over-sensationalism in the media, and less about a piece of hardware.