Mono and its many facets screencast 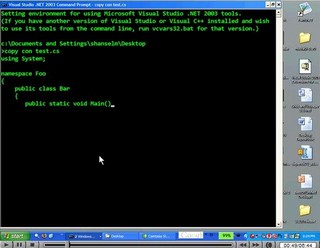 I'm sure this has probably already been said, but I wanted to "put it on paper" as it were. I was showing a fellow at work a few things with Mono, and decided that the quickie demo I did was interesting enough that I should do it again. If you're not familiar with Mono, it's an alternative open source implementation of the CLI spec.

In this demo I create an application from the command line, compile it with Mono and .NET, use Reflector on both and compare the resulting IL of both. Then I run them both and use Process Explorer to see what's going on at runtime.

Jon Galloway
November 22, 2005 14:00
Mono is an excellent project and I was following it for quite a while. The problem I have found with it is the lack of support for WinForms and the rest of the non-Code libraries. Some people had implemented ASMX last time I looked but there was still a lot to do.

The power of the .Net frameworks comes from the combination of the sdk, the runtime and the libraries. I think that those libraries are a massive piece of the puzzle and a similarly massive amount of work to implemnt. (Just have a quick read of Brad Abrams SLAR, if you can :P).

I've checked back recently and WinForms seems to be making progress but do you think that the project has enough momentum to drag it into .Net 2.0?

Jan Bannister
November 22, 2005 18:58
Well done! What sort of differences did you find in the assembly manifests?

I'm glad you've tried and showed this sample of Mono. The comparison of the IL code generated, altough quite simple in this case, is a point I haven't tried before.
Other nice show would be cross-platform compiling and execution.

For Jan, you can get more info in http://www.mono-project.com/Mono_Project_Roadmap and http://tirania.org/blog/archive/2005/Nov-17.html

Martin Trejo
November 22, 2005 20:08
A little more than a year ago I got interested in Mono. So I wrote a quick console app that would read some stuff from an Xml file and a SQL Server. Then it would output that data.

I compiled it on my linux box, ran it under mono, and it worked flawlessly.

I then FTP'd the executable to my windows box, and ran it - again, it worked as expected.

I was very enthused at the time - but later lost interest - because at the time ASP.NET support was pretty spotty.

So...I think a great blog idea for you would be to do a screencast showing off ASP.NET stuff under mono. Maybe create something on windows and then deploy it to your mac mini?

If I can successfully get Mono running on my SGI Octane I will try and do the same thing :)

Bryan Batchelder
November 22, 2005 20:38
I've played with Mono on Linux, not on my Mac yet. But the possibility of multi platform is exciting to me. I shall try to run .NET code on my eMac during the Thanksgiving days! hehe

vbNullString
November 22, 2005 22:02
Great demo, I've been tracking Mono for a while as well. Good to see someone make a nice example.

Question for you: What software are you using to do the screencasting?

patag
November 22, 2005 22:40
Just a quick remark: From what I could see in the screencast, the file whose IL you saved in monoil.txt is actually testmsft.exe. Take a look at it once again: You drag and drop both files, realize it didn't work because they had the same original filename, then drag testmsft.exe only and save its IL as monoil.txt.

Great screencast, though. Mono is really a great piece of software.

Maurício
November 22, 2005 22:49
Maurício, ya, it LOOKs like that because Camtasia only goes at 10 frames a second. I actually noticed that after the fact and triple checked in. It looks like it in the screencast, but I actually checked the source movie as well as doing it twice more. I should probably do it again and compile to a different "original filename" as most folks don't realize that assemblies remember their original names.

Scott Hanselman
November 23, 2005 2:06
Your voice is much different than I anticipated, however excellent clip I actually learned alot. I had no idea you could compile with MS Compiler and still use mono, I found that very interesting...I guess it makes sense though, I gave mono a try a long time ago when it was still in development and was less than impressed with it, very very slow and buggy when I tried it. Looks like I should revisit it however!!