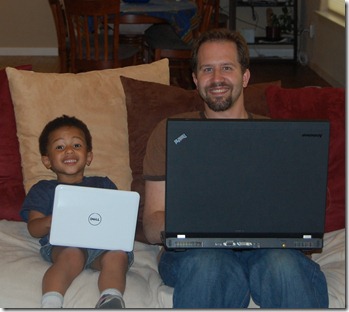 "But it’s the same laptop!" my wife said. I've been using a Lenovo T60 or T60p for a very long time. Since it came out, in fact. I had a T60 at my last job for years, and a T60p all the while at Microsoft. I have happily running 64-bit operating systems on my T60p with 4gigs of RAM…unfortunately with the caveat that the T60p can only address 3gigs, no matter what. (Unlike its smarter cousin the T61.)

I've been at Microsoft almost 2 years (it'll be 2 years in October, I think) and I've been begging my boss for a "hardware refresh." That's Microsoft speak for giving your laptop back and getting a better one. You're better off if the laptop you want is "MSIT Supported." Folks have been known to order all sorts of crazy stuff, but they're responsible for keeping it running if things go south.

My budget was limited and I wasn't able to get an SSD (Solid State Disk, vs. a regular hard drive) in my new laptop, but I would have needed at least a 160gig version anyway, so I'm not too sad.

I've been trying out two Lenovo laptops and settled on one. The other gets sent back to Lenovo.

First, The Beast, then Ultimate Winner. Note that all of this is just my opinion, and I didn't get any free stuff or whatever. I'm just writing a review because I felt like it.

I was on-site working for a week recently at a large NW company that does business online. I took the W700 with me for a trial run. During the final presentation of the code I had written for this client, it was noticed I'd forgotten to remove a reference in the code to a proxy server I'd been running, so the Senior VP saw "http://bigasslaptop:8080" on his conference room screen. At least it wasn't a proper cuss word, but I felt I needed to explain myself to the room. I pulled out the ThinkPad W700 and the VP I thought I'd offended said "Holy s***, that's a big ass laptop. Ok, I get it now. Continue."

There's nothing else it could be called. This laptop is only a laptop if your lap is two-laps wide. This laptop could be considered a deadly weapon and beat a man to death. This laptop has its own gravitational pull with netbooks and smaller laptops orbiting around it.

it's truly awesome. It is a quad-proc machine with an amazing 1920x1200 17" screen and a second 1280x768 pull out side-car monitor. What's that extra monitor for? Toolboxes, the Solution Explorer, your Email, whatever. It's brilliant, and don't knock it until you've tried it.

If you're looking for a luggable, this is the pinnacle. My #1, and really ONLY problem with the laptop is that it's just too big for my bag. In fact, i was unable to find a bag, backpack or briefcase (even my beloved Zero Haliburton aluminum case) that could hold it.

However, if you want a desktop machine that you can really easily move around, look no further. It's a portable machine, but not a machine you move lightly, or without a buddy assist and strong back.

The WEI scores speed for themselves. A 7.2 on the processor out of a max of 7.9, that's crazy on a laptop. Notice the 5.8 for 3D graphics. It's a great gaming machine (Half-Life looks great) and it'd be excellent for 3D modeling. Interestingly, only the Hard Drive suffers compared to the W500.

The W500 is EXACTLY like my T60p. But with more awesome. It basically fixes every tiny thing that was wrong with the T60p, which was very little. It weighs the same and looks exactly like the T60p. It adds an integrated webcam in the bezel, which means one less thing to carry on trips. It also adds a built-in card reader in the front, which is nice as I've got a half-dozen SD Cards lying around. There's 3 USB ports, a VGA port and a Display Link port and a nice ATI card with a half-gig of RAM. It'll run my big monitors no problem. The screen on the W500 is amazing, running at 1920x1200, but the same size as the T60p.

It's got Bluetooth, WiFi with an external switch 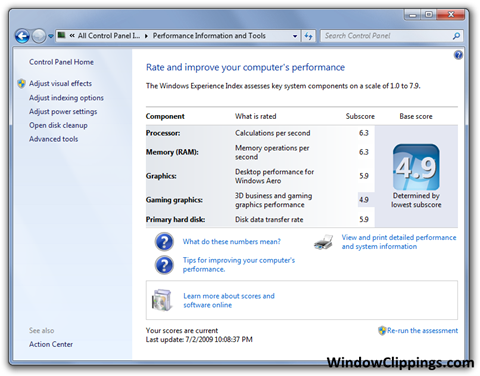 (thanks!) as well as WiMax built-in, which is rolling out through my town.

There's a standard PC Card and an Express Card slot. It's got Gigabit Ethernet, which is nice as the whole house is wired. There's also a FireWire port in front. The only thing it's missing is an External SATA slot.

The W500 isn't the big powerhouse that the W700 is, but it's no slouch for a laptop. Notice that you'd have a 5.9 WEI if you drop out the 3D score. I wish I could have put in a SSD but budgets are what they are.

I love this W500 because it's exactly the same size as the T60p. It's the T60p, but updated with everything new, fast and wonderful. It's a nice, normal-looking laptop that is so powerful I can use it as my main machine. There's lots of giant laptops, but the W500 isn't. I can totally use it on a plane without trouble.

To be clear, I've got a MacBook, I've got a Dell Mini 9, a Dell Studio, and a Toshiba. I've used every brand under the sun and I realize that everyone's got their own opinion. Everyone's had a laptop fail and decided that THAT brand sucks.

I've personally had great success with Lenovo ThinkPads for work. They are the tuxedos of laptops. I'd buy a Mac for a personal machine and run Win7 on it (I do) but for work, as a developer, the ThinkPad W500 is rocking my world. I'm running Windows 7 happily on it as well as booting into a Windows 7 VHD with Dev10 installed. 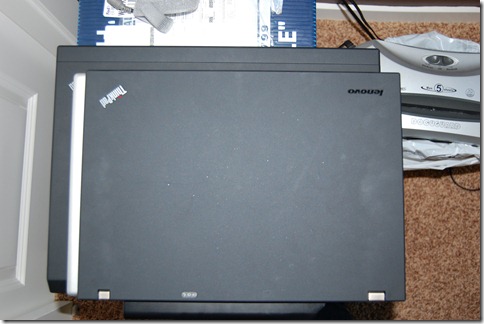 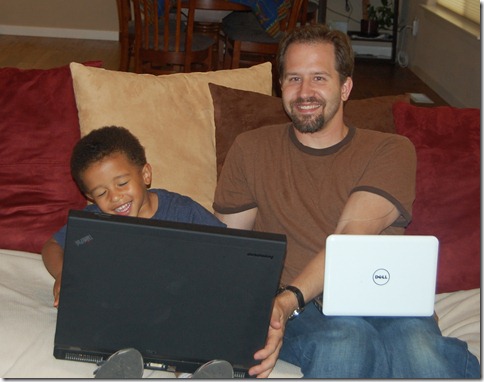 Jake
July 03, 2009 15:57
Yep, that _is_ a big laptop. Is it running on notebook chips or desktop chips? How many drive bays does it have, and what raid levels are supported?

I got the 7200 RPM drive, I'm thinking I might move to SSD next year when the price / capacity equation gets a bit better. But even as is, it's compiles fast and runs cool

I'm not sure how long it's going to take me to get used to the Fn + Ctrl key placement, and I've hit F1 a bunch of times when I meant to hit Esc, but overall I'm really happy with it.

Anthony Bouch
July 03, 2009 19:31
Scott, thanks for the incredible review. We have covered the ThinkPad W700 and the ThinkPad W500 extensively at ThinkPadToday, but its great to get such a forthright opinion of these two superb 'laptops'. They really both do show that Lenovo is continuing to innovate and improve the ThinkPad brand.

We were about to write an update review today but you've saved us the trouble, we will just link back to this article with a synopsis!

Love the picture of your boy with that W700 on his lap.

Thanks for the insight Scott,

Nice review, Scott. There certainly is a lot more junk laptops out there than good...quality keeps getting sacrificed for a lower price or higher profits (I won't be specific but I'm thinking of one that rhymes with 'bell'). Too bad there's not a superstore where you can try out all the online-only laptops before you buy.

How do you like the keyboard on the ThinkPads? They used to be the best you could get...are they still?

I know you mentioned the variety of systems you own, I wonder if you come across a Dell "E" series (the new latitudes) if you'd compare it to the Thinkpad? I know Thinkpad's have wicked geek cred, but on the other hand Lenovo is quickly going out of business and when my friend ordered one he waited 40 days, hadn't seen anything so cancelled and ordered a Dell (got it in 5 days, of course I think Dell might be better known for fast supply chain then great computers). Just curious comparing two "professional" notebooks against each other.

Harvey
July 08, 2009 15:33
I am digging the Dell E6400. Very sleak case, ESATA, PC Card, Built in smart card reader (which is a plus at MS). But my favorite feature is the dual DVI out on the docking station. So when I am at my desk it will drive 2 24" monitors so I don't of the deal with looking at mis matched monitors all day.

Jivtesh
July 11, 2009 13:58
I have W500 more than two months. Everything is as expected except for drivers. I was first having dual boot with win server 2008 and win 7 for almost two months. On win server 2008 nothing works as it should, driver for ati works randomly like 2 times out of 10 starts, no chance to use function keys and with that docking station is useless. On windows 7, it was not that bad, driver for graphic card was downloaded by windows update, and it was driver for ati 3850hd but works. So after lots of troubles, I decided to format it and install Vista x64. Here everything works eventually, I finally have graphic card in use. I will not comment about fingerprint software because it would be rude, but you can read lots about it on the forums.
You got a Full HD resolution which is great when you watch some HD video, but on this screen size you must use larger 120 DPI. So you have to reconcile with that. Thankfully Visual Studio doesn’t have any problem with larger DPI as some other programs.

Boban
July 12, 2009 4:04
I was lucky enough to find one of these just after HP discontinued the model. I paid $1250. Besides replacing my desktop this machine is also a nice media center. It even has a remote control that detaches from the keyboard.

20" display. Full size keyboard with numeric keypad. It has an extra hard drive bay which I have used to increase my storage up to a 1 terabyte. The speakers sound great thanks to the built-in subwoofer.

The downside is that thing is very heavy. 15lbs.

Aaron Seet
August 12, 2009 5:58
Very good review. Need your comments. Highly appreciate if someone can get back to me at bipinsa@yahoo.ca

I own a late 2008 unibody MBP and I love it (15"). The screen quality is just too great. The brightness is awesome. I believe it is an LG screen.

My wife wants to buy Lenovo W500 with WSXGA+ screen. The review I have been seeing say that the screen is good but the brightness is not that great. Can someone please tell me if anyone has physically compared lenovo WSXHA+ screens with MBP?

I have not found any other windows laptop that has as good screen as my mbp. Can some one help, because i do not want anything less in quality. Your comments will be appreciated. Any photos will be even better.
Thanks,
Bipin

Bipin
September 24, 2009 20:46
I agree this is one of the best notebook i have, unfortunately there isn't much dealers here that sells lenovo brand, have to go online to get one. glad to come across http://lenovoprices.com/, full of lenovo stuffs, also bought a spare battery just in case.