A few months ago the XmlTeam teased us with some screenshots and screencasts of a newly redesigned XSD Designer for Visual Studio 2008. It's unclear if this will make it into RTM or if it'll be a quick download/add-in, but regardless today they released CTP1 of the XML Schema Designer (download). 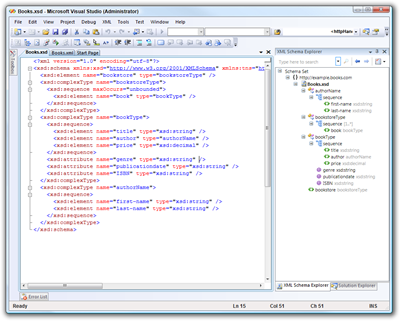 The original schema design surface was more DataSet focused and it would sometimes mess with your Schemas. It was clear (to me at least) that it was schizophrenic to have on designer taking on double duty, especially as folks are making more and more complex Schemas. Here's a books.xsd schema I use for examples, loaded into VS 2008 with the new Schema Explorer on the right.

Also, a tip when writing Xml Schemas in Visual Studio...don't forget to right-click and hit Insert Snippet. The XSD Editor includes a metric butt-load of XSD-specific snippets that are worth using.

Don Demsak
August 30, 2007 10:28
For years I have been continually amazed as each day passes and I down hear the announcement:

It would seem to be a complete no-brainer to me to buy them and roll what's appropriate into VS. Is there something I'm missing or just what is the story on why this hasn't happened...?