NewsFlash: Computers are Faster Than Before - Importing Digital Video from Tape and Making a DVD 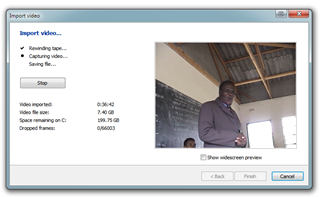 The Wife and I travelled all over the world before we had kids (and all over the world after, actually...both boys have been on three continents) and amassed a huge pile of Video Tapes of our travels. I started with a Sony Digital 8 camera that recorded very crisp 640x480 uncompressed digital video to a standard Hi-8 tape, then "graduated" to a Mini-DV Canon camera, then most recently to a small Creative Vado HD. The Vado does 720p, but I figure next big family trip I'll talk to video prosumer Pete Brown and buy a real 1080p HD camera.

I just rediscovered a box full of these old video tapes. There's dozens of them. I remembered that I never made (slightly more permanent) DVDs or backups of these tapes because transferring video from the Digital 8 camera in 2003-2004 was a huge hassle. I have memories of messing about with firewire cards and drivers, camera timecodes and most significantly, hard drive space and CPU speed.

This tape-based digital video camera seems to pump out a gig of video per five minutes of tape, or about 20 gigs an hour. This was a big deal in 2004. Also, whatever machine I had 6 years ago had a lot of trouble keeping up and always dropped frames. I had to shut off services, background apps and defrag my hard drive because even the "tiniest bump in the road" meant a less-the-perfect transfer.

Even though I take video with my Vado HD - which saves to an internal 8gig flash memory - I basically gave up on tape=based video after this crappy experience, and dozens of tapes got put in a box. Today, his Sony DCR-TRV330 Digital Hi-8 camera still has fantastic quality and a high-quality lens (as if 6 years is an eternity).

This post is largely about the seamlessness of the process, much of which is due to everything working out of the box driver-wise in Windows 7, combined with the fact that computers are WAY faster now and hard drives are WAY larger. This of course, is hardly a newsflash, but I wanted to write this post because I was truly surprised at how this previously frustrating task actually became so easy that it was actually fun and more than a little rewarding.

Importing Video from a Digital Tape in 2010

I didn't know what to expect, but I figured what the heck, and I just turned the camera on, put in a tape and plugged it into my Windows 7 machine via a firewire cable.

Surprisingly, the camera was instantly recognized and even showed up in my Devices and Printers window (lower right). 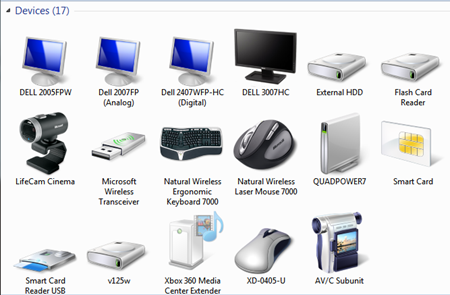 A moment after the camera showed up here, this dialog conveniently popped up: 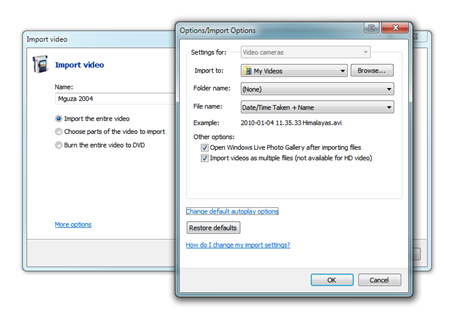 I selected "Import the entire video" and "Import as multiple files." That last option will make multiple files if the there is more than 30 seconds of time elapsed between two cuts. This dialog and utility were included with Windows Live Photo Gallery, but they work so seamlessly, I though they were part of Windows.

Then, click Import...it automatically rewound the tape (nice touch) and started capturing video. The salient point here is that I didn't have to do anything other than plug it in and click OK. 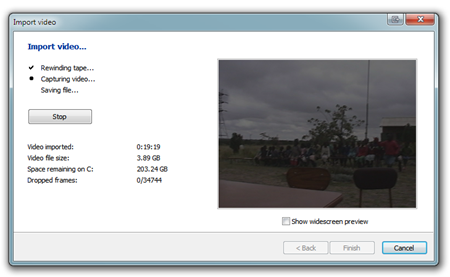 Machines today are so fast, I'm 20 minutes into this video, 35,000 frames and no drops. Piles of space free.

After the files are ripped, it was a 10 minute process to put together a nice menu, name some scenes and burn the DVD with Windows DVD Maker (which apparently comes with Windows, although a free Movie Editor requires a download).

This is so easy, I'm going to make DVDs of all these old video tapes, and I'll store the ripped video on my Windows Home Server.

It's nice to revisit things that were a problem or hassle a few years back and find they they are totally solved problems today.

Comment on this post [14]
Share on Twitter or Facebook or use the Permalink
January 18, 2010 20:50
I haven't thought about Windows DVD Maker since it was part of Vista (Ultimate only I think). I loved the menus it created and it's simplicity in some ways but there weren't enough encoding options for me. I couldn't reduce video quality as low as I wanted despite knowing the video was of poor quality and it was frustrating as I was over running a dvd by about 5 minutes. I understand the aim of keeping it simple a couple of advanced options hidden away wouldn't have gone a miss though.

I will have to take a look at the windows 7 version see if it has improved.

Pete
January 18, 2010 21:14
It's a small world, and must be the year of the old video tape. I too have an old Sony 8mm, mine's a Hi8 and I too have a pile of video tapes that have languished in a drawer. A few months back I picked up a digital 8 off Craig's list to play back the analog 8 tapes via firewire on the D8 and capture them on my hard drive (picked up an extra 640 GB drive to use just for video capture).

I've used both Windows MovieMaker (2.6 on Win7) and Windows PhotoStory (for doing Ken Burns type of movements on photographs) and bringing the results into MovieMaker; both a good (and free) entry level products. I picked up Pinnacle's Studio Ultimate v14 with more capabilities for doing some larger editing projects with some of the old footage.

I also tried Adobe's Premiere Elements, but ran into problems with it running on Win7, otherwise I probably would have used it for editing, maybe the next version.

Family and friends enjoy getting the DVDs where they play leading roles.

Steve S
January 18, 2010 23:35
Nice if you have a cam with a firewire connection, but what about cams with only analog red/white/yellow RCA connectors?

While it's fantastic to see it all working so well, it's unfortunate that it has to be such a surprise when technologies based on standards work as they should.

However, it's nice to know the next time I have an interoperability problem I can just set it aside for 6 years and it'll be solved (c;

http://www.google.com/profiles/shazron
January 19, 2010 4:12
@Dave, There are quite a few USB input adapters for RCA-style component inputs. You can usually find them for under $100 at Best Buy or Walmart. Be careful about 64-bit and Windows 7 compatibility. I've been using one I bought a few years ago to capture under an XP boot because it didn't like Win7 (or Vista).

https://me.yahoo.com/aztracker1
January 19, 2010 19:16
I've been meaning to get around to doing this myself - I've got a bunch of MiniDV tapes and broken camera. Any tips or ideas on where to get a relatively inexpensive MiniDV player or cam so I can get these onto DVD?

terry
January 19, 2010 21:18
Scott - funny you should post this as I just ran into a major hassle importing video from my SONY TRV15 which seemed to work fine under vista 32 - I am now running Window 7 Ultimate 64 bit. The error I get is "The video device is currently in use. Close any other program that is using the device and try again" I have tried a slew of fixes, but to no avail. Windows does reccognize the camcorder when I plug it in, but then it throws the error dialog.

This came up at the same time my wifes Dell Inspiron 1420 blew out its nVidia 8400m gs gpu - right after the extended waranty expired- see http://bit.ly/HwEd4 to get a glimpse of that nightmare... but Dell did do right by me and I supposed to be getting the 1420 serviced after all. I be blogging both of these later this week.

If anyone else is experiencing the "currently in use" error - please share ;)

nickknyc
January 20, 2010 2:01
I started to revisit a bunch of old junk late last year as well, when I realized that even gems like this didn't make the comprooder sweat at all. The thing that's difficult to deal with is just how awful the source quality is.

I'm not burning to DVD though. I used to do it when it was difficult, but years later I never look at the DVD's. I've been just compressing at high bit rates to H.264 and leaving them on the computers, drives and back up on S3.

Jeff Putz
January 26, 2010 16:34
I too recently connected my old Sony TVR camera and it got detected in few seconds. Will try downloading the Movie Maker and rip my Hi-8 tapes.

Is it true that Ripping take almost same time as the video playtime? Any tools to convert the Hi-8 tapes to DVD(.avi) in less time?

Scott Hanselman
June 22, 2010 7:03
Yes, technology is evolving so fast. Nowadays we enjoy HD and even 3D videos and backup videos in various ways so conveniently. I envy you have a large collection of videos recording those memorable time.