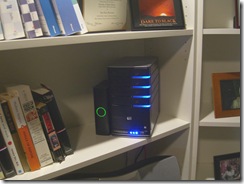 I've blogged about Windows Home Server before. I'm a huge fan. Recently Uncle Ronnie's new Dell computer had a hard drive die. It was under warranty and Dell had a new hard drive mailed to me within days.

The old hard drive is clicking and unhealthy, but after a dozen tries, I get it to boot off the sick drive. I run chkdsk /f /r 4 times until it works and then quickly (don't make it angry, I say) hooked Uncle Ronnie's machine up to my Windows Home Server via it's wireless adapter and did a complete "one click" backup. This backs up the entire machine to the Home Server. He's running Windows XP but uses dial-up for his internet access. Remember this point as it's significant for later.

Then I swap the dead hard drive out for the new one. On another computer I visit \\SERVER\Software and burn the Home Server Recovery CD in a few minutes, then boot off that CD on Uncle Ronnie's machine.

I'm going through the restore process and it says I haven't got network drivers installed. Uh oh. What now?

Well, there's actually a very helpful link right in the Restore Wizard that says Windows Home Server includes all the network and storage drivers from the backed-up machine at the time of the backup in a automatically-created folder that lives in the backup itself.

The instructions say just open the backup from the Home Server Console. This is cool in its own right, as Windows will mount the backup as a new drive and you can copy files off it. During backup an unambiguously named folder called "\Windows Home Server Drivers for Restore" is made that is full of directories with storage and network drivers from your computer. Again, these are the drivers that were installed when you backed up your computer.

I mounted the backup and copied that drivers folder to a USB key. I didn't have to restart the restore, just press Scan and it loads the drivers dynamically. Unfortunately it didn't find the hard-wired network adapter I was planning on using to restore this laptop.

I stared for a while.

Turns out that since Uncle Ronnie uses Dial-Up, he never had the Wired Network Adapter drivers installed, so they we never backed up!

I could probably try to boot up the dying hard drive, install network drivers, then backup the hard drive again hoping that Windows Home Server would find them and  yada yada yada, but seriously, I'd be tempting fate to try and get this drive to spin again.

Instead, I dug around in the USB key and it appeared that the folder structure was folders named with GUIDs (Globally Unique Identifiers) with .sys driver files and .inf driver info files inside.

I took a change and created my own GUID folder (basically just copy pasted another and changed some numbers). In this screenshot, it's the top folder with a bunch of zeros.

Now, what to put in it? I went to the Dell Drivers Website and found the download for the Marvel Wired Network Drivers. It was an EXE, but most of these driver downloads are self-extracting ZIP files, so I opened it up directly with 7-Zip (the greatest and best archive utility.)

I poked around in the driver archive looking for .INF files and .SYS files and copied both the Vista and XP drivers into my {GUID} folder on my USB key, hoping that the Windows Home Server Restore that was still waiting on Uncle Ronnie's machine would just scan these drivers and assume it put them there. 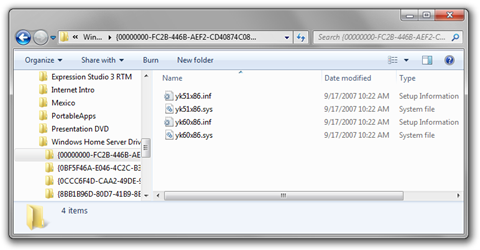 In fact, it worked! I clicked Scan again and the wired network adapter showed up in the list and the restore of Uncle Ronnie's old backup to his new hard drive worked perfectly!

Comment on this post [12]
Share on Twitter or Facebook or use the Permalink
October 15, 2009 11:14
Similar case: When restoring a 64-bit Windows 7 machine, the restore CD didn't find 32-bit network drivers... I downloaded the 32-bit network drivers and dropped them in a USB drive. I didn't have to create a fake GUID folder (just dropped the unzipped 32-bit driver files in a regular folder)... apparently, when scanning for drivers, it just looks at all folders in the USB drive, irrespective of their names.

https://www.google.com/accounts/o8/id?id=AItOawnE4XvXL3UHKM3CohhPqgE7gF8T4A8Hqhw
October 15, 2009 14:10
I would love to get the HP implementation of Windows Home Server, but my backups are currently stored on a networked WD World Book. I have no off-site backup so if my house burns down with all the computers in it, I'm just out of luck. If I can save up for a WHS, I'd like to move the world book off-site and have the WHS back itself up to it over a network (I've considered the possibility of VPN or even extending my own network with longer-range, directional wireless). A friend of mine very infrequently backs up data to a portable HD and walks it to work. How do you and your readers secure data in case of a local catastrophe?

KDog
October 15, 2009 15:08
I've found a similar issue with the restore of a x64 laptop. The network driver was backed up, but the WHS Restore CD couldn't pick it up because basically the CD is running an x86 copy of the OS... Lesson learned: if you are backing up x64 machines, make sure to make a copy of the x86 drivers somewhere handy.

Bernhard Grojer
October 15, 2009 17:26
I'm confused. Which machine is wireless here? And how did you connect to the backup server to capture the backup in the first place without installing the network drivers (thus capturing them in the backup)?

http://glenh.myopenid.com/
October 15, 2009 20:53
So I've got a Win 7 x64 machine, that's being backed up by my WHS. I'm thinking of replacing the system drive with a fast SSD...is this the slickest method? Create the restore disk with the new drive in place and go go go?

Assuming of course my backup isn't bigger than the new HD...doh.

Ryan Smith
October 15, 2009 20:55
Ryan - That's how I updated my machine to SSD, although as I recall I had to boot off a recovery disk at some point and run FIXMBR, but otherwise it was cool.

Scott Hanselman
October 16, 2009 21:18
Ryan, Scott - sure that's the best idea? SSDs should be aligned to 128kb...this doesn't happen by default based on a restore, does it? There are also other Windows features (defrag most importantly) that should be manually shut off on the SSD system if you go this route.

Ryan Smith
February 20, 2010 11:52
What do you mean by "one click" backup? Is this an WinXP function or WHS? In this example was it just a data backup or a Win XP restore point backup and how did you get it to save to the WHS? Perhaps I haven't found it yet but do you have a how-to as to how and what you backup to WHS beyond data files like docs, pics, video.

The way I read the first few paragraphs of your post it sounded like you were able to restore the entire hard drive (OS, files, everything) to the new HD as if it was a ghost image or something similar.

https://me.yahoo.com/a/ulxdh1US1NaISLxIxzkU0WX7cg--
February 21, 2010 6:21
I mean if you install the Home Server Connector software on your client machine then it'll backup the complete image of your client to the Home Server every night. Other than being a file server, the image backup feature is the whole point of a WHS.