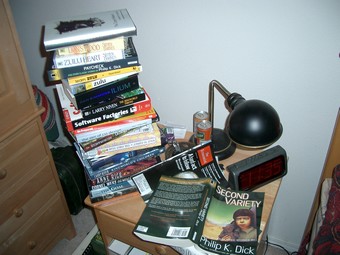 When Mo is asleep, I read. She's on the couch right now, and I'm going through a Philip K. Dick anthology. I have a similar pile at Work, so I figured I'd post each.

First, here's my Home reading stack that's next to my bed.

I'll post the Work stack next week during lunch.

Comment on this post [8]
Share on Twitter or Facebook or use the Permalink
October 23, 2005 4:13
As one new father to one who's heading that way, I'd recommed the book "The Happiest Baby on the Block". It's helped us figure out how to soothe our little girl during some late, late night fussy-fests.

Scott
October 24, 2005 12:23
As another new father I would recommend reading all of these quickly as once you have the baby there will be little time left over for such endeavors:)

Nicholas
October 24, 2005 18:44
I'm just wondering: where you find the time to read all of this, *and* work, *and* blog? Let alone have time to spend with your wife and have an outside life! Can you give a hint of what your schedule looks like on an average day/week?

Peter Carl
October 24, 2005 19:55
Well, I actually don't do a very good job of managing my time. Work is a constant thing...all the time, and the crackberry doesn't help. I get home from work around 6, and hang out with Mo until 10 or 11 when she falls asleep. I might then work on dasblog, the book, blog, read, play xbox, work on the mame system, whatever, until about 2 am. So there's 3-4 open hours every day. Same with weekends.

The other untapped spot for doing stuff like reading is being on a plane. I can't tell you how many times I've been on a plane at 9am when literally the whole plane is asleep. That's 2+ hours to read or work. Same thing with waiting for boarding. I keep my laptop on standby, not hibernate or off. That way I get instant on and off. You'll be more likely to open your laptop if it's easy and trouble free. Lunch is also a good time, or any downtime. I blogged recently while hanging out in the waiting room of Beaverton Toyota during an oil change. It's really just the will to do it.

If you think Stephenson is great you should check out Neil Gaiman:
Good Omens - the funniest book about the apocalypse you'll ever read. It's as good as Douglas Adams' books.
American Gods - full of what made Snow Crash cool: well-researched mythology, compelling characters and attitude. Anansi Boys is the new sequel that's sitting on the top my pile, not yet opened.
Smoke and Mirrors - entertaining and original short stories, many of which are also found in audio form. If you can find Bebe Neuwirth's reading of Snow, Glass, Apples your ipod will love you for it.
Sandman graphic novels - I don't read comics any more, probably because Gaiman stopped writing them. Fortunately he's given us enough to read for months before starting again at the beginning.

I recomend finishing Ringworld Throne, the ending is pretty cool. I thought Ringworld's Children goes a bit far and ended a bit abrubtly, but was a fun read nonetheless. I would like to have seen someone that writes fatter books (like Tad Williams or Niel Stephenson write it, I felt Niven left something on the table with that one.

I'm actually bummin around here because I am evaluating blogging solutions and DasBlog is the leading contender. I am also looking at DotNetNuke and the new NewBlog module but my dba team is uncomfortable with giving a web app dbo permissions in a prod environment (why is that heh). It's also written in vb.net and although that isn't a problem, it's just a bit icky to work in IMO.

glad to know i'm not the only one with bedsidestackitis.