I'm back to work and trying to install the Released version of Office 2007, and am greeted by this friendly dialog, announcing that

Hm...considering that I've never installed Office 2007 Beta on this machine, and I think this would qualify as a very poor error message that would totally stump my Mom.

According to the FAQ online, this is indicative of having the Office 2003 Web Components from a previous version is installed. Of course! Why didn't I think of that?

Well, this would be fine if it were true in my case. After removing the Office 2003 Web Components via Add/Remove Programs the problem persists. I doubt my OWC components are from a beta of Office.

OK, so what is the setup looking for, and finding, that is causing it to bork like this?

So, I fired up Filemon and Regmon from SysInternals and begin to dig.

FileMon indicated that the setup log file was here:

...and inside that file was

...which resulted in this informative message:

However, it doesn't show up in Add/Remove Programs:

But it does show up when I run the very fabulous MyUnInst from Nirsoft (a must-install tool) along with a few other things like "Microsoft Office Proof," which I assume is the Spellchecker and Grammar tools. I'm not sure WHO installed those or when it happened. Pressing Ctrl-U on these items within MyUnInst started the uninstall process.

Once I removed these strange little things, Office 2007 started to install as expected.

Not the best OOBE (Out Of Box Experience), but I think we can assume my Mom isn't running any Beta stuff like this, so hopefully she won't have a similar experience.

A few interesting asides, if you poke around on the Office 2007 installation media:

UPDATE: I got a note from a Microsoft Insider who clued me into why this might have happened to me. Seems I installed a beta of Microsoft Expression Web a while back, and it shares this MSI with other Office componentry. Good to know.

He also shares: "Mondo isn’t some super-secret better-than-best product. It’s an internal-only product we use for test purposes. All current and planned Office suites can be found online at http://office.microsoft.com/en-us/products/FX101635841033.aspx"

Clicking "Get Genuine" will launch your default browser (mine is Firefox, which this website doesn't support, and I got caught in a Javascript page-reload loop and the page reloaded over and over again, so I pasted the URL into IE manually) and tell you basically the same thing: 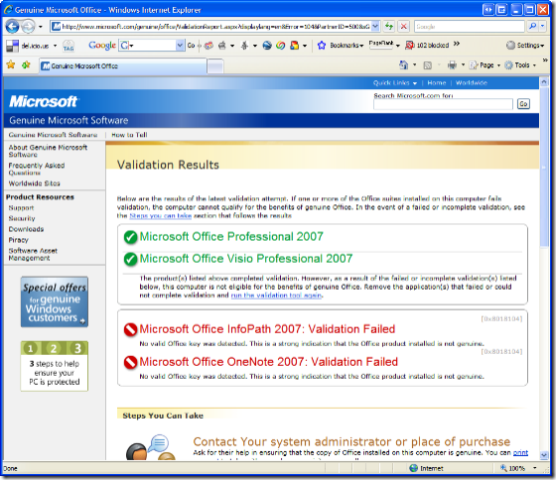 So, I went back into those two programs and entered my Product Key, which interestingly enough after entering, told me to "Install Now" again. I did, then visited the Genunie Validation page again. 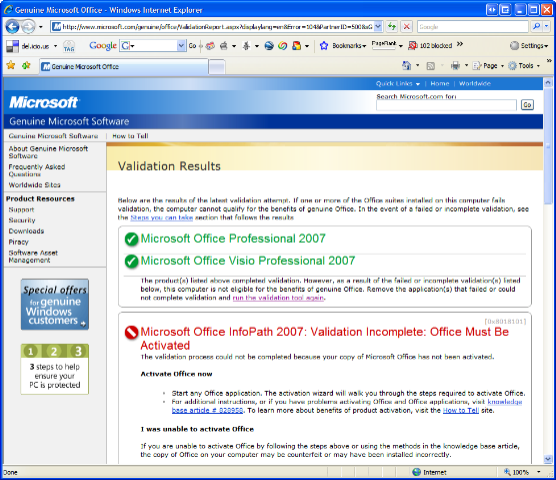 Close, but looks like I need to activate first. So, I closed both apps, and launched them again and was prompted to activate:

...and I was told it was cool. Then I visted the page again:

...and now I'm told that my MSDN key "has been identifed as a false key used with counterfeit copies of Office." That's weird, since I just got it off MSDN and it was just used to activate Office and Visio. This isn't good. I tried again in OneNote: 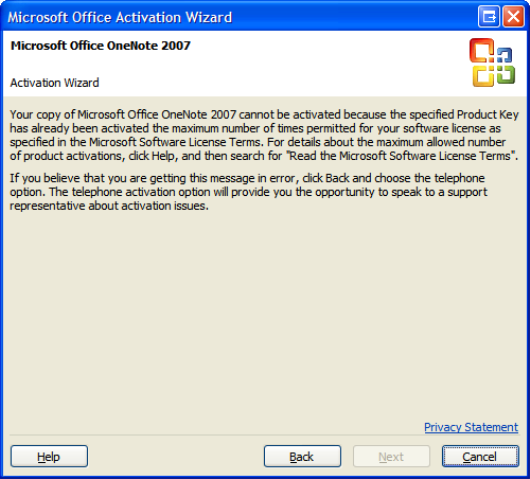 Now I'm told that I'm not only counterfeit, but I've also used the activation key too many times. I'm not sure which it is, as I'm using the same key (the only key) for all these activations...Office, Visio, OneNote, InfoPath. I thought that one key in Office was one key for the suite, not each app outside of Office Professional. I'm still not able to get any templates off the Internet or download product updates.

Moral: Just enter your Product Key when they ask.

At this point, even though the website says that my copy of InfoPath is not activated and is, in fact, not legit, it does work fine. My copy of OneNote however, will not activate. According on the MSDN Product page, "This product key will activate 10 PCs" - I've only used this key on the one PC, and I just got it today. It's also confusing because MSDN lists two kinds of keys, one for Office 2007 Professional and one for "Office 2007 Desktop Programs."

I'm not sure what to do now. This sucks.

Comment on this post [21]
Share on Twitter or Facebook or use the Permalink
November 14, 2006 20:32
This is why I've sort of cooled down on installing BETA software from MS.
Everytime you have to launch Filemon to install an application, an angel loses its wings.

John A. Davis
November 14, 2006 21:25
Hey Scott, sorry to read about the less than informative error message on you Office install....

Just wanted to drop you a quick note to say that Rosebud isn't new, actually I remember coding Exchange 2000 and SharePoint 2001 customisations using it around 6 years ago. As you correctly pointed out, it is the "codename" for the MSDAIPP component (Microsoft Data Access Internet Publishing Provider) an OLEDB provider for WebDAV, and it is used for client access to SharePoint. If you are really bored, this KB article talks about it all in more detail (2003 flavour of products) http://support.microsoft.com/?id=838028, things may have changed with the 2007 flavour.

I am currently debating the decision to upgrade or not. And this post will help. :)

Does anyone know that with all the new features in Visio 2007, can I save my work back to a 2003 format for sharing with colleagues?

Vaibhav
November 14, 2006 23:02
Regarding Office "Mondo"...
I first saw this on Long Zheng's blog over the summer. He had a good hypothesis that "Mondo" was the codename for whatever SKU will eventually replace "Student and Teacher".
http://www.istartedsomething.com/20060830/office-2007-icons-and-skus/

PWills
November 15, 2006 1:54
as I'm using the same key (the only key) for all these activations...Office, Visio, OneNote, InfoPath. I thought that one key in Office was one key for the suite, not each app outside of Office Professional.

Bryant Likes
November 15, 2006 7:08
Office 2007 installation also took me 2 hours to install. 40 minutes for download, another 60 minutes for BETA2 uninstallation and 20 minutes to install the RTM. I looked for a solution in KB and Office 2007 known issues page but they can't help until I found this blog, http://pschmid.net/blog/2006/11/13/79. The problems are same as yours, Proofing tools and MUI.

I wonder if I'm a naive customer who try to install Office 2007 RTM on the machine with Office 2007 BETA 2.

WIennat
November 15, 2006 8:36
Yeah have the same experience when trying to download the pdf and xps exporter. Genuine check fails stating that my key is pirated. Sad downside of MS politics agains software piracy. Called MSDN but even they couldn't help with the short answer that i'll have to send them an email with the error because Office 2007 is brand new and they have no clue about supporting it :(.

Artur
November 15, 2006 8:48
Rosebud (the ms data access internet publishing provider - msdaipp.dll) is not new - I wrote it in 1998 at MS. It is in fact an OLEDB provider that makes the Internet look like an OLE DB rowset. A row is an URL that represents a web resource (such as an html page), the columns of the row represent various properties of the resource such as size, mod date, etc. This page in turn may itself be viewed as a rowset which will be filled with all of the links on that page. In this way you can navigate the web by tunneling through rowsets. It supports FTP and HTTP protocols. It's smart about DAV if the server talks DAV. It even works with the local offline cache and will return resources from the cache if they exist there. Rosebud is the primary way that Office Web Folders and My Network Places get to the Internet, while being smart about offline files.

To use it just instantiate a provider with provider name = msdaipp.dso, data source=an url. More info at http://support.microsoft.com/kb/248501/.

Peter H.
November 15, 2006 12:28
Hey Scott, I had the same problem, and I had to use CrapCleaner to clean out the registry, delete the Office 2007 program files, then delete all entries in the registry with "Office 12" and Office12 in the key or data fields. I ran CrapCleaner on the reigstry again, and finally I got Office 2007 to install.

So all in all, not the fastest of experiences, nor is it for the faint hearted! But it worked for me!

Kuli Maingi
November 15, 2006 19:56
I'm pleased that i chose to install Office 2007 Enterprise instead of MSDN's Office 2007 Pro.
Using one key (VLK) I got 'em all, the suite and all desktop applications in one package. Installation
and activation went really smoothly, no problems what so ever. Though i think using VLK bypasses
actual activation 'cause after installation all apps are already activated.

Rainer
November 15, 2006 21:53
I also got the "activated the maximum number of times" message when I tried to install InfoPath. I actually entered the key when first prompted. After repeatedly rejecting my key, I chose the "activate by phone" option. After 5 minutes of reading and typing numbers, I was magically activated!

You saved me much time!!! Thank you very much!

Kiet Tran
November 16, 2006 15:34
Thanks Scott for this post. I have spent the last few days going nuts trying to find the solution. Thanks also for the great Uninstaller app link.

Chris Woodruff
November 16, 2006 15:49
I got this same cryptic error... Like you, I hadn't even attempted to install any such office beta product. It turned out to be Microsoft Expression Web Beta 1.

Michael McDaniel
November 16, 2006 18:11
Yup, "me too" on the Expression Web beta problem. I eventually googled a reference to that somewhere, and I think there might've even be something related in Expression Web's readme (but who knew to look there?). It wouldn've been nice to get a more specific error message, on a fdifferent day I might've done a lot of damage trying to fix it with a hammer before figuring that out.

irf
November 16, 2006 22:43
Scott, thank you so much for your post. I echo Chris W's sentiments in that it saved me a lot of time and the uninstaller app was just what I needed. I'm sorry about your activation woes. I did indeed have to use 3 different keys for Office, OneNote and Visio.