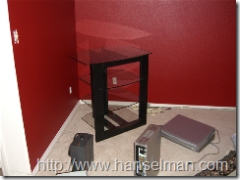 Our Home Theater, er, Living Room, has consisted of the same Sony Receiver and random collection of goo since I worked at 800.com. Since we got HDTV it got really difficult to manage the system because the Sharp LCD has 5 inputs and the older Sony Receiver has 5 inputs and we had to do all this video + audio switching. "Put the TV/Video on Component 1 and the Audio on Optical 2" - you get the idea.

The Harmony Remote made a huge difference, and I still love it, but the receiver has been showing its age and every once in a while it will just stop making sound. Then 15 minutes later, it'll make a loud click and start up again. The Sony 925 Receiver isn't a "video switching receiver" for anything other than composite analog signals, of which I have none.

I started doing research on a new receiver using the kitchen remodel and living room repainting as an excuse. I figured since I'd have the whole thing ripped up anyway, why not put it back together right.

I decided on the Onkyo TX-SR674S (S for Silver) for a number of reasons.

All in all, I'm VERY happy with the receiver and how much cleaner the whole system works now and I recommend this receiver highly.

Cool beans. I have a Onyko reciever now, but it is an older version. It does video switching but not video conversion... so, Component In is only switched to Component out. But, as you say, the Harmony Remote makes this a no brainer since the "Watch TV" activity switches the Reciever Input and the TV Input.

If you don't mind me asking, what did you pay for this bad boy? Do you have any problems with HDCP sources being switched through the unit? I would assume not as it just passes all the bits?

Bob Archer
October 19, 2006 18:32
I'm with you...not an audiophile, but I like things to sound good. I'll probably be in the same boat as you whenever I decide to upgrade my TV to HD, but until then my JVC 5.1 receiver works great. The built-in XM radio is cool!

BTW, you really need to hide those wires running along the wall on the right. Tsk, tsk, tsk. :-P

Scott Hanselman
October 19, 2006 21:53
> (No TV for the baby)
Excellent decision.
2 things we do in my house to limit children watching TV :
1) I will rip the audio of a favorite DVD movie and burn it to a CD. Then the CD can be played anywhere (almost).
2) If the DVD has not yet been ripped, or is not owned, we play the DVD and just turn off the TV screen. The audio comes through the receiver.

Jason Dossett
October 20, 2006 18:48
Scott- A few ideas... If they will easily tuck underneath the itty-bitty space where the carpet meets the molding, that would be your easiest option. Although Z still might find them.

Cutting a hole in the floor would certainly get them out of the way, but I wouldn't want to leave it open to your crawlspace.

The more complicated, but more professional, long-term solution is to route them through wall plates. I put my surround sound wires in the wall (via the attic) with connector plates. It was amazingly easy to do. The faceplates are the same size as outlets/light switches and can be found at Radio Shack or Home Depot (in my area). Instead of electrical boxes they make these little metal brackets that are the same size, but completely open so you can easily attach your wires to the connectors (found by all the electrical boxes in Home Depot). I also used these brackets for running CAT5 through my house. You can run the wire through the walls and under your house or in your attic, whichever is easier.

Basically, I put a set of connectors in the wall behind my entertainment center for the wires from the stereo to plug in to. Then I ran wire through the wall, up into the attic, over to each of my speakers, back into the wall and connected to another face plate connector at each speaker. If you want more details about how I did it and the parts I used let me know.

tod hilton
October 21, 2006 18:34
Hey Dude,
You may want to get that expensive equipment off of the floor with a little one running around.. Trust me.. You don't even want to think about some of the stuff that is stuffed into VCR players, computers, DVD Drives by little kids.. :p

Just a suggestion from one dad to another.

Very Lost
October 27, 2006 21:14
As it turns out, my receiver was damaged during my move. Are you still enjoying this? What are the little annoyances? How good is the component->HDMI conversion? It wouldn't be worth it for me if it wasn't close to perfect since xbox360 doesn't have HDMI (yet). With most receivers I've seen having fairly poor component switching, I'm a little worried about one that's trying to do something that's quite a bit more complicated.