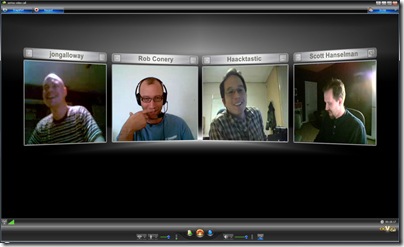 As a remote worker going to meetings sucks. It sucks big time. Huge. Nothing is worse (from a work perspective) than listening to six faint voices over a speakerphone get work done while you struggle to remain relevant.

Sometimes I can convince someone to bring a laptop to a meeting but inevitably they haven't got the right software working. If we can actually get a video going, I have to explain to them how to get it going full screen.

If we actually do get it working using either Office Communicator, Live Messenger or Skype, we can only have one to one video. (Yes, I know about iChat, but not everyone has a Mac).

I'm not sure of the relationship between ooVoo and the others, but I can tell you that ooVoo is like Skype PLUS multi-person chat. Wow. It's fantastic. It'll do 6 people. I tested it with four as you can see above. The video is better than the audio, but we had folks in 4 states (1 in Hawaii) so I'm not sure everyone had the best connection.

It also has a beautiful "You Don't Know Jack" juicy style animated interface. It's very responsive and you can minimize and maximize whatever individual or individuals are talking at the time.

Color me impressed. It doesn't have any of the office features like Office Communicator, so that'll still be my primary chat for work, but this'll be great for the couple of meetings I have a week with remote folks in many locations. If you sign up my ooVoo name is "shanselman."

2. I use skype a lot for talking to my mom, since I have a little baby and my mom is far far away. So to solve the problem you mentioned of bad voice, I simply use skype now for video, and have the regular phone on speaker to transfer the voice (you should *mute* the skype microphone on both sides so that not to waste bandwidth on moving the voice)

hernan
February 09, 2008 3:34
We've been using this at Eleutian for a few months now for our remote standups and other random meetings. It also has free calling to US phones, so we can include people on their cells in the standups if they're not at their machines.

daniel
February 09, 2008 14:28
Nope. It's been good. It's been better than skype actually because
skype hiccups usually result in audio replaced by static whereas oovoo
hiccups just seem to delay reality a bit so we generally don't lose
any verbage.

Andrei Rinea
February 11, 2008 15:50
Thanks for the product review on this Scott! I've been looking for something like this for our remote team's meetings. This should work wonderfully!

Javier Lozano
February 11, 2008 17:14
Thanks Scott. This looks pretty cool. The best part is that their site indicates a Mac version is coming soon. I'm a Window's dev and only have a PC at home, but the rest of my family are Mac users. I can do 1-1 video chats with them using Skype, which works pretty well, but we haven't found anything to do PC-Mac multi-party chats like they can do with iChat. Hopefully we'll be able to do that soon with ooVoo!

Kevin Kuebler
February 11, 2008 23:32
Only one question ... Why on earth would you want to look at a bunch of developers' faces? I thought the whole point of remote working was to not have to deal with the unshaven, unwashed geekdom!

Just kidding, of course. But seriously, I've never felt a strong need to see others' faces (or for others to see mine.) If I'm on a call, I just interrupt at inappropriate times to make sure they still know I'm participating. That works especially well for me since I do the same when I am present...

Shawn Hempel
February 11, 2008 23:35
Now if only I could find a cost effective way to implement a blue screen....I want all my conference calls to look like I'm participating from the cockpit of the Millenium Falcon.

Ryan Smith
February 13, 2008 12:54
I first heard about this from company from my sister (to her, a computer is basically internet explorer and myspace) and she managed to get my mom to use it (she's a huge technophobe who I still can't get to use skype). They have a big following with the troops in Iraq and afghanistan because they donated a bunch of web cams, laptops, and the free calls into the US goes a long way.

When my sister asked why I'm not on it (because I'm usually on the cutting edge of these things). I told her I didn't want to install another instant messenger (ie. Yahoo, AIM, MSN, Skype, Gtalk, ICQ, facebook, you get the idea).

Joe Chin
February 15, 2008 4:39
Hey, thanks for testing out ooVoo. I am a representative of ooVoo hoping to gage blogger approval and answer questions. I love your comparison of the platform to "You Don't Know Jack"-I used to LOVE that game and had totally forgotten about it.

First of all, I'm so glad you are using it for video conferencing for work. Thats the whole point! Its also good for families, those living abroad, and the deaf community. ooVoo has just launched ooVoo 1.5, a new and improved version . in celebration, ooVoo will have free calling to cell phones and landlines for the rest of the month and is sponsoring My ooVoo day for the rest of the week which consists of 23 bloggers and podcasters from a variety of different industries and interest groups hosting their communities in multi-user online video chats. (profits go to the Frozen Pea Fund-a cancer fund).

you can also download the Mac version at My ooVoo Day

hit me up with questions and have fun!

Mike
March 04, 2008 4:09
I just tried this out with my Sister and I found the audio delay to be too distracting to have a conversation. I can't imagine how it would be with more than two people. Do you think this is solely based on our connection speed or could it also just be inherent in how they process audio in oovoo?

Luke Foust
March 12, 2008 12:01
My favorite part of using ooVoo is the sending video messages through email and the special effects you can do. I work on behalf of ooVoo and think that the service has really caught on with online users lately. It gives more options that Yahoo Messenger, MSN Messenger, iChat, and Skype.

Lafeeu
April 08, 2008 12:24
hello..I want to know howI can meet online user in oovoo , are there chat rooms on oovoo..I wish you could hlp me to know how to fine new friends in oovoo
thanx