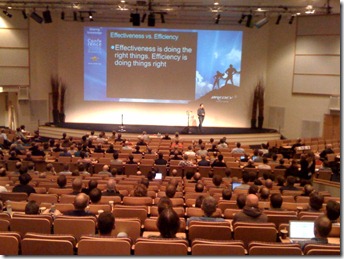 I was at Øredev 2009 in Malmö, Sweden this week. Øredev is fast becoming one of the premier conferences in Europe focused on the software development process. It's a consciously technology agnostic conference so there was not only a .NET tracks and a Java track, but also tracks like Agile Ways, User Experience and Cloud Computing.

I believe there were something like 100 speakers so it was an incredibly diverse conference. I hung out with some friends from Sun, an iPhone hacker from AT&T, ASP.NET Debugger Tess Ferrandez, Trygve Reenskaug the inventor of the MVC Model, as well as old friends like Carl and Richard and new ones like James Bach.

Oredev was interesting for a number of reasons, not the least of which being that they didn't use regular plates and utensils, but rather organic ones made from collected banana leaves.

I presented at the keynote on Friday. My topic was "Information Overload and Managing the Flow" and I talked about the differences between Effectiveness and Efficiency and how apply some personal introspective and get more work done. That video will be up soon and I'll post it along with my slides ASAP. I also presented on ASP.NET MVC 2.

One of the random but fun things we did was the final panel of the conference. These are always silly things, presented just before the beer and chips arrive, and they are a nice way for everyone to blow off steam. Basically some of the biggest egos speakers participate in a panel where questions come from the audience and from Twitter.

The Panel was moderated by Björn Granvik, and the folks on the stage were:

I had the idea to stream this panel live (I've done this a few times - fairly guerilla - at other conferences) over UStream.tv. I figured I'd just point my laptop webcam and crappy integrated mic at the stage and while it'd be lame, it'd be something fun to do as I know there's a bunch of people who'd like to participate.

Turns out the sound and video guys at this conference really know their stuff. We were able to jerry-rig a fairly nice little setup. They took the XLR cables and the complete mix from their mixing board and not only switched it down to a 1/8 male mic jack, but they also change it from line-output to mic-output to deal with my laptops lack of a line input.

Then, a guy said, hey, I've got a Professional Canon DV Video Camera with Firewire. It turns out I had a Firewire port on my laptop and I just plugged his camera in on a lark. Boom, Windows 7 found the drivers online and the Firewire Camera showed up as a webcam.

Using the uStream software, we mixed in video and audio and recorded this 60minute panel discussion.

To be clear, there is likely no actual "content" here. We were asked to "edutain" more than educate as it was the final fun of the conference. We were all pretty good friends by this point so we were flicking the mud fairly liberally.

One warning if you listen to this without headphones, there are about three swear words on the recording.

I hope the fun we had comes out in this spontaneous recording. Also, thanks to the roughly 200 people who heard about this LIVE stream on Twitter and joined the chat and drove the discussion.

If you like this kind of thing, let me know and I'll continue to put together these kinds of web-events. Enjoy!

https://www.google.com/accounts/o8/id?id=AItOawnxe5XmP2pWAb_pC2vS2o7WaYIKj0fq9G8
November 07, 2009 16:27
I just love this kind of thing. I'm from Brazil and it's always good to find events like this with live broadcast. Keep em coming.

https://www.google.com/accounts/o8/id?id=AItOawmlL4hqbHK-digBuLeFbiwN06PhjUx-cvM
November 09, 2009 14:50
Who is Scott you spoke to before the actual panel?

Schmuli
November 09, 2009 19:37
Would you upload the video to google video (http://video.google.com) as well? We are from China but unfortunately we couldn't access your video on UStream.tv from there. Thanks !

Hope this helps folks in China. Let me know?

Scott Hanselman
November 22, 2009 7:29
Thanks Scott, unfortunately you_tube, face_book and twitt_er are all blocked in China. Anyway thanks ^^