Patterns and Practices Webcast - Open Source in the Enterprise

I can't say it's rich in content, but it was fun to host. At the Patterns & Practices Summit last week I was able to host a panel on Open Source in the Enterprise. The panelists were Ted Neward, Patrick Cauldwell, Rocky Lhotka and Chris Sells. Chris was done remotely, so we did a Live Messenger Video Call and put Chris' disembodied head in the form of my laptop on a chair and lashed a Logitech Quickcam where his head should have been. Then we swiveled Chris around as needed so he could see what was going on. Dennis Mulder has some pics, one of which is shown below. Chris the flat cardboard standup with the laptop between Patrick on the far right and Rocky, second from the left seated. 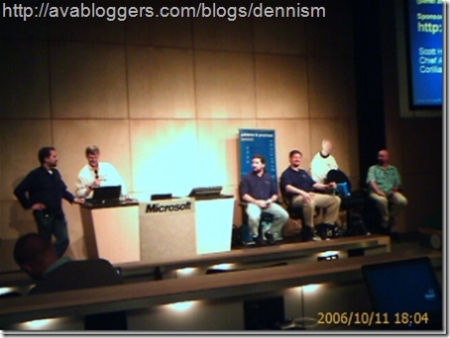 Chris released the Genghis WinForms Project under a Shared Source license, Rocky released CSLA under a custom license, Patrick works with a variety of Open Source components at Corillian, as do I. I work on DasBlog, an Open Source project, and Ted comes to us from the Java site of things, so it was a fairly diverse group considering that we were on the Microsoft Redmond Campus.

Scott Hanselman and Ted Neward are fun to watch, their cocky arrogance makes you just love them and hate at the same time. The quote of the summit for me was Scott’s line to an attendee’s question about if their methodology was similar to one of Fowler’s patterns “I don’t read Fowler… I use success as my metric”. I have great respect for Fowler, but Scott’s pragmatism was a great reminder that a balance between theory and practice is essential.

It is true, Ted does feed my snarkiness a little bit, but a fun time was had by all; the goal being to provide edutainment. As for the "success as a metric" comment, that was kind of an inside joke from when I used the same line at Chris Sells' XmlDevCon 2004. BizCoder does (fortunately) nail my actual point, though, that success means many things, not just adherence to a religion or pattern.

Unfortunately there's no video of the event, but there were some interesting audio moments. It was recorded as a webcast that you can view online. The webcast was brought to you by CodePlex.

Patrick and I also presented "Contraxploitation" at the PNPSummit, a modification and update of our TechEd 2006 US talk that I'll also be presenting at TechEd 2006 Europe in Barcelona (It's ARC308 if you'll be there). We have made considerable improvements since then and now have the Indigo contract generating. I should have the demo with me in Europe.

I was so bummed I missed it... thank you for giving me a little taste of what to expect next year. :)

It would be great Scott if you could do a Hanselminutes on Patterns & Practices, especially on Dependency Inversion. This principle seems to help alot in decoupling components and making them easier to test. It would be nice to hear your take on the open source projects like Castle Windsor and Spring.NET that make Dependency Inversion and dynamic configuration very simple.

I watched the recorded session, based on your 'edutainment' metric I thought it went pretty well. BTW the MS Events website sucks when it comes to watching old webcasts. I felt like a circus animal jumping through hoops, have they not heard of Podcasting over there?