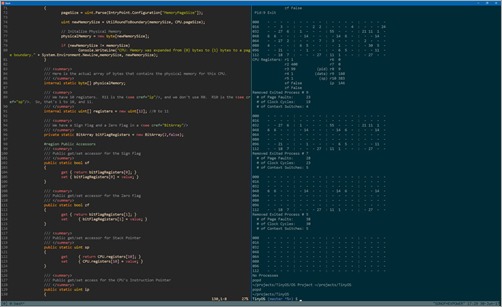 I've had a number of great guests on the podcast lately. One topic that has come up a number of times is the "toy project." I've usually kept mine private - never putting them on GitHub - Somewhat concerned that people would judge me and my code. However, hypocrite that am (aren't we all?) I have advocated that others put their "Garage Sale Code" online. So here's some crappy code. ;)

While I've been working as an engineer for 25 years this year, I didn't graduate from school with a 4 year degree until 2003 - I just needed to get it done, for myself. I was poking around recently and found my project from OIT's CST352 "Operating Systems" class. One of the projects was to create a "Virtual CPU and OS." This is kind of a thought exercise. It's not really a parser/lexer - although there is both - and it's not a real OS. But it needs to be able to take in a made-up quasi-Assembly Language instruction set and execute them on a virtual CPU while managing virtual memory of arbitrary size. Again, a thought exercise made real to confirm that the student understands the responsibilities of a CPU.

Here's an example "application." Confused yet? Here's the original spec I was given in 2002 that includes the 36 instructions the "CPU" should understand. It has 10 general-purpose 32bit registers address as 1 through 10. Register 10 is the stack pointer. There are two bit flag registers - sign flag and zero flag.

Instructions are "opcode arg1 arg2" with constants prefixed with "$."

I write my homework assignment in 2002 in the idiomatic C# of the time on .NET 1.1. That means no Generics<T> - I had to make my own strongly typed collections. That means C# has dozens of (if not a hundred) language and syntax improvements. I didn't use a Unit Testing Framework as TDD was just starting around 1999 during the XP (eXtreme Programming) days and NUnit was just getting start. It also uses "unsafe" to pin down memory in a few places. I'm sure there are WAY WAY WAY better and more sophisticated ways to do this today in idiomatic C# of 2017. Those are excuses, the real reasons are my own ignorance, ability, combined with some night-school laziness.

One of the more fun parts of this exercise was moving from physical memory (a byte array as I recall) to a full-on Memory Manager where each Process thought it could address a whole bunch of Virtual Memory while actual Physical Memory was arbitrarily sized. Then - as a joke - I would swap out memory pages as XML! ;) Yes, to be clear, it was a joke and I still love it.

If you are more of a visual learner, perhaps you'd prefer this 20-slide PowerPoint on this Tiny CPU that I presented in Malaysia later that year. You dig those early 2000-era slides? I KNOW YOU DO. 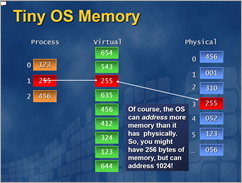 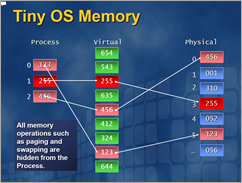 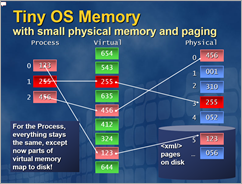 Step 1 was to download the original code from my own blog. ;) This is also Reason #4134 why you should have a blog.

I decided to use Visual Studio 2017 to upgrade it, and even worse I decided to use .NET Core 2.0 which is currently in Preview. I wanted to use .NET Core 2.0 not just because it's cross-platform but also because it promises to have a pretty large API surface area and I want this to "just work." The part about getting my old application running on Linux is going to be awesome, though.

Visual Studio then pops a scary dialog about upgrading files. NOTE that another totally valid way to do this (that I will end up doing later in this blog post) is to just make a new project and move the source files into it. Natch. 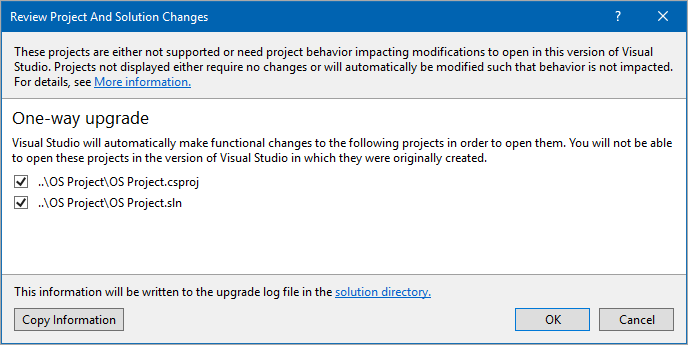 Visual Studio says it's targeting .NET 2.0 Full Framework, but I ratchet it up to 4.6 to see what happens. It builds but with a bunch of errors about Obsolete methods, the most interesting one being this one:

That's telling me that my .NET 1/2 API will work but has been replaced in .NET 4.x, but I'm more interested in .NET Core 2.0. I could make my EXE a LIB and target .NET Standard 2.0 or I could make a .NET Core 2.0 app and perhaps get a few more APIs. I didn't do a formal analysis with the .NET Portability Analyzer but I will add that to the list of Things To Do. I may be able to make a library that works on an iPhone - a product that didn't exist when I started this assignment. That would be Just Cool(tm).

I decided to just make a new empty .NET Core 2.0 app and copy the source .cs files into it. A few interesting things.

Other than the obsolete configuration warning and a few malformed XML comments, the app compiled and ran! You can actually "watch" the nightmare process here https://github.com/shanselman/TinyOS/commits/Core2Port in the form of GitHub commits. I also moved the docs from a 2002 Word Doc to Markdown so be sure to explore the fairly extensive spec https://github.com/shanselman/TinyOS.

The only significant change was loading the config. Configuration is even more different on .NET Core 2.0 than Full Framework. It's FAR more, ahem, configurable. I could have used "Options," I could have written my own config provider if it was important to keep the file format.

This little TinyOS has a bunch of config options that come in from a .exe.config file in XML like this (truncated):

I have a few choices. I could make a Configuration Provider and reach .NET Core to read this format (there's an XML adapter, in fact) or make the code porting easier by moving these "name/value" pairs to a JSON file like this:

This was just a few minutes of search and replace to change the XML to JSON. I could have also written a little app or shell script. By changing the config (rather than writing an adapter) I could then keep the code 99% the same.

My code was doing things like this (all over...there was no DI container yet):

And I'd like to avoid major refactoring - yet. I added this bit of .NET Core configuration at the top of the EntryPoint and saved away an IConfigurationHost:

I've got a Dictionary in the format of the IConfiguration host called "Configuration." So now I just do this in a dozen places and the app compiles again:

This brings up that feeling we all have when we look at old code - especially our own old code. I should have abstracted that away! Why didn't I use an interface? Why so many statics? What was I thinking?

We can beat ourselves up or we can feel good about ourselves and remember this. The app worked. It still works. There is value in it. I learned a lot. I'm a better programmer now. I don't know how far I'll take this old code but I had a lovely afternoon porting it to .NET Core 2.0 and I may refactor the heck out if it or I may not.

For now I did update the smoke tests to run on both Windows and Linux and I'm happy with the experiment.

Have YOU done a project like this, either in school or on your own?

Comment on this post [10]
Share on Twitter or Facebook or use the Permalink
July 02, 2017 6:15
Excellent post! I've been upgrading a personal project since about 2000. It started in vb6, and every 2-3 years I've upgraded it through from a Vb.net windows app to asp.net forms to the latest c# mvc asp.net SOA. I've always found it an excellent way to be exposed to and learn about the new technologies without having to start over.

I want to try asp.net core and .net standard, but it's frustrating that I can't just change the .net version in the properties. I have to start over with a new project. It feels that especially for .net standard this should be possible/allowed in visual studio for a class project, and then just start throwing errors at me so I know what I need to do to move to the next best thing. Additionally it would give everyone who is still on an old 4.* (or earlier) version an easier way to see what is required to move forward

Any chance I'm not the only one who wants to do this? I understand it's not straight forward for asp.net apps, but I have plenty of simple class projects I feel like this should be possible. I've looked at the project files and I can see they are radically different in .net standard (and a lot simpler), so I know it's not a "10 minute" fix.

Sam
July 02, 2017 8:56
I had no idea that was your project, but it doesn't surprise me after knowing and reading your blog all these years. I remember that project coming up on Slashdot or OSNews or one of those niche sites just as I was graduating school and getting heavily into .NET development at the time. I remember thinking the use of XML was an interesting niche feature that showed the capabilities of .NET at the time.

Nick Berardi
July 03, 2017 9:46
I think you could have referenced System.Configuration.ConfigurationManager if you wanted to go all the way with "it just worked" :)

Robert
July 03, 2017 18:05
We all have those prehistoric pieces of code, and it required lots of courage to share them with the public. However, what all of us learn from it, is priceless.
Thank you, Scott.

Frank Boucher
July 04, 2017 0:23
One of the best projects I had in college was to write a vector graphics application (think Adobe Illustrator). The project was written in Turbo Pascal. The project used a graphics tablet and digitizer and we used it to digitize our class crest. As part of that project we built an entire graphical user interface for the application (this was before Windows). After college, about the time Windows 2.0 was released, I retrofitted the application to use a mouse instead of the graphics tablet.

I wish I still had the code for that app. It would be interesting to see how much easier it would be to build that today, given the rich UI libraries that already exist. You could rip out a ton of code if you didn't have to code things like Bresenham's Algorithm on your own.

Joe Brinkman
July 04, 2017 5:16
@Peter - I didn't do that because System.Configuration.ConfigurationManager is in netcoreapp2 but not netstandard2. Am I wrong?

Scott Hanselman
July 05, 2017 8:26
Its really good to see back then too schools in the US gave good projects such as your"Virtual CPU and OS.", I believe that even trying to make such projects even if one is not successful, one gets to learn so many low-level concepts which helps one in the long run in their programming careers. Unfortunately even now in India, 99% of students are given web related projects, which many students pay & outsource, get them built and are also trained how to present them at their schools. Few students who do not do this and explore and build things on their own, sadly end up getting lower grades because others have a finished project.

You can download a tool and install Java and design a complete computer that will run Tetris.